A clever little twist can turn a game of skill into a hilarious frenzy. Add a chess clock to Jenga. Build a house of cards on a block of ice in the middle of the summer. And if you're feeling particularly gutsy a/o insane, play billiards with live explosives. For those who don't want to risk singeing off an entire eyebrow or torso, there's always the alternative of Blast Billiards Revolution by Andromedus, a take on pool where you've got to pot balls as quickly as possible, before they explode. And as if using bombs for balls wasn't enough, you've also got sticks of dynamite in the pockets, mines that detonate when hit too many times, and crates of TNT littering the table. In fact, we suggest playing this virtual version of combustisnooker over any real-world versions involving explosives. Safety first, kids. 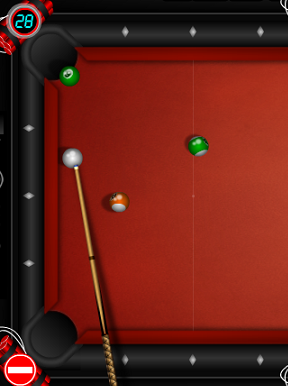 Your specific goal will vary from level to level, but generally you want to hit balls into pockets as fast as you can, as speedier play gets you more points, and more importantly, prevents detonations. In some levels, each ball is a bomb with its own timer, or each pocket requires a ball to be sunk in it before its timer runs out. Use the mouse to aim the cueball at where you want it to go (note that you're lining up the ball's destination, rather than the stick behind it). Click and hold and drag the stick back to select the power of the shot, then release to set your play into action. You can also use [WASD] to put a bit of spin on the ball, if you're familiar with how that works.

Your score for each level is usually determined by how much time is left on the balls (or pockets) when they're potted. Scratching (hitting the cue ball into a pocket) deducts ten valuable seconds from your timers and should be avoided at all costs. If you score high enough to earn a three-star ranking, you can add an additional lifeline to your arsenal. These lifelines let you use a guide that shows where your balls will go for three shots, add extra time to the timer, or undo a shot. Unfortunately, spending a lifeline is permanent, whether they help you beat the level or not, so be careful how you deploy them.

If you've got a friend handy, there's also a two-player mode where you take turns potting balls as quickly as you can. each player has their own timer which determines how many points a pot is worth. When one rack is cleared from the table, another one is brought on until both players run out of time. This setup relies on both players fairly sharing the mouse (since there's no downtime between turns, unless if there's a scratch), but it's a good way to add a competitive edge to the game.

Analysis: The control scheme of using the mouse to point directly at where you want the cueball to go, rather than trying to swing the stick behind it and hope you have the right angle, is pleasantly welcome and less frustrating than many other pool games (and, to be honest, playing pool in real life). However, this ease of play is balanced out by levels that don't allow you to make many mistakes before your time runs out. You've got to be very accurate and very fast to earn high star ratings and extra lifelines. 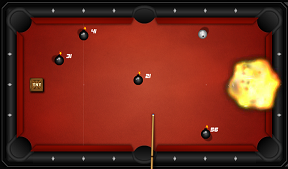 Occasionally, the levels might feel unfairly hard. The crates of TNT, which explode with even the slightest contact and end the level instantly, are just a bit too harsh of a punishment when setting up a decent shot might be hard enough. In levels where you've got to fill the pockets in a certain order, you might need to play (and lose) a few times to memorize the order of the pockets so you can set up shots more efficiently. On the other hand, this steep difficulty curve forces you to play more carefully. Eventually, you learn to break your amateur pool instincts and only pull the stick halfway back instead of full power every time, and fiddle with the english to learn how to get the ball exactly where you want it after a shot. Even under the pressure of the clock, you can still pick up a few helpful tricks for the next time you're playing in the break room or bar.

If you're looking for an invigorating take on an old favorite, Blast Billiards Revolution is an excellent choice. The difficulty curve might be a bit steep, but it's a lot safer than strapping bombs to the pockets of a pool table.

It seems that always when I have five seconds before explosion and the setup is perfect, I can't get my dang cue stick to behave and point in the right direction..