Illusion Labs wants to send you on an adorable quest to rescue lost boxies while you play with colored bombs and blow up everything in sight! And it's a quest you should gleefully accept, as the team's latest mobile offering Blast-A-Way is packed with all the right gameplay elements seasoned with sweetly delicious art style that makes you feel like you're four years old playing with blocks in your room. Only, you know, now you've got bombs. 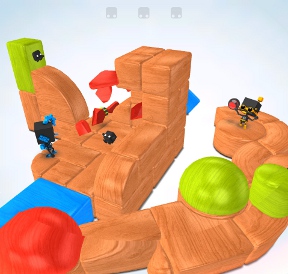 One bright but cloudy day, the Boxies, being the curious little critters they are, decided to climb to the top of the Sticky Bomb tower to check out, well, the sticky bomb. Turns out that wasn't such a great idea, and when the bomb goes off, all the little boxies get scattered to the winds. That leaves you and a few grown-up pals to puzzle your way through a series of gorgeously-rendered 3D levels, using bombs and teleporter orbs to move around and collect lost boxies. Somehow, it makes the fact that you're blowing up things with bombs seem so cute and cuddly!

Tap a big boxie and drag to set a walking path which the selected character immediately begins to follow. When you pick up a bomb, tap and hold where you want to throw it, then release when the moving arc selector points to the type of throw you need (shallow, high and sharp, etc.). The bomb flies from your hand and does its thing, destroying blocks of the same color, bouncing off of other blocks, and knocking things all around the stage. There are different types of bombs to use, including bombs that go off on impact as well as sticky bombs, and later you get cool things like teleportation orbs and a sort of reverse bomb that repairs destroyed blocks. Things get pretty intricate pretty fast, showing that this game isn't afraid to flex its puzzle-power muscle. 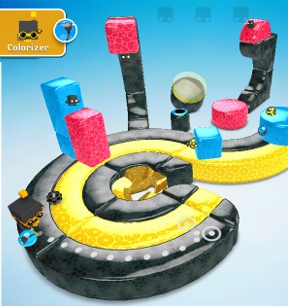 Even though you don't have to grab every single boxie in every level, collecting them is the only way to unlock new worlds, so you'll quite naturally want to "catch 'em all", if you get my drift. Later stages also introduce multiple characters you can control, using each one to open passageways and remove blocks so the rest of them can walk about more freely.

Analysis: Blast-A-Way has a very sunny, ilomilo meets iBlast Moki 2 vibe to it, and if you've played either of those two games, you'll know that's high praise indeed. Irresistibly playable is a good way to describe it, as the satisfaction of blowing up "toy" blocks while figuring out exactly how to work your way through each level is so very very fun, and Blast-A-Way offers enough challenge and content to be worthy of your time investment.

The controls, while sufficient and easy to adapt to, leave a little to be desired, owing largely to the lack of physical buttons on the iOS platform. Drawing paths for your characters to follow is fine, but it isn't nearly as precise or responsive as actually moving the guy with a separate analog stick. Sliding, panning and rotating the camera is accomplished with one and two fingered swipes, so there's no problem there, but aiming bombs with a flat screen in a 3D world does require a little practice.

If you don't mind the relatively high price tag (worth it considering the high production values and 80 levels to complete) and you're a master at manipulating all sorts of games with a touch screen, Blast-A-Way will give you nothing but color-filled bliss for hours and hours on end. And even if you're a fan of physical buttons in games, you'll have a hard time saying no to a game that's put together as smartly as this one!