You're a stickman! You have a lot of guns! There are a bunch of goons in that building that want to kill you! You should kill them first! You've got a battle suit that allows you to slow down time because it has technology or something! Maybe at some point you'll pick up a chainsaw! There's really not that much more to say! Black IV: Time of Revenge, a top-down action shooter by Modern Boys Production, is a continuation of a series that first made its way to the internet back in 2006. Move with the [WASD] or [arrow keys] and aim/fire your current weapon by clicking the mouse. You can enter into a Bullet Time mode for a recharging period of time by hitting the [spacebar], and again to exit it. Change weapons by clicking on them or by pressing the corresponding number key. You can use [Q] to switch back and forth between your two most recent weapons, and [R] to reload. In the top right corner is a menu that lets you select your current special weapon, like grenades or remote-detonated bombs. You aim your current special weapons by hitting [F], then set it by clicking. Defeating enemies will cause them to drop cash and grant you experience. Use these to unlock weapons upgrades and customization options using the menu in the lower left. You can also search cabinets and computer terminals for extra cash, ammo, and health packs by standing by them and holding [E]. Beat all the enemies, bosses, and Da Final Boss and you win! It's that simple! 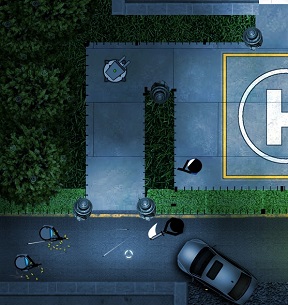 Now, top down shooters were around before Hotline Miami, and they'll be around long after Hotline Miami. Still, while the previous installments of the BLACK series got there first, the newest installment could hardly escape being influenced by its pixelated cousin, or at least, studiously ignoring its influences. It has none of the surreality, the deconstruction, or brutality that we've come to expect from the genre as of late. And that's all right by me! BLACK IV's solid construction and pretensionless gameplay is a breath of fresh air. It may just be about a guy shooting a bunch of other guys, occasionally in slow motion (because why not), but it's happy to be about that. BLACK IV: Time of Revenge is an unrepentantly goofy and escapist throwback, and despite a few odd quirks (the needlessly complex customization system, ammo that's a bit too expensive, and enemies possessing shields that can apparently withstand anything short of a rocket launcher), it's hard to keep your trigger finger from itching.