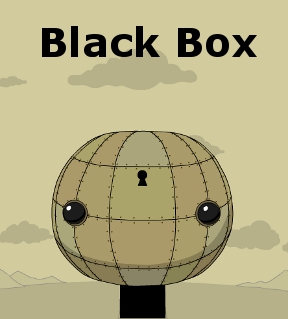 The developers we feature here don't tend to ask a lot from us in return for the content they put out. They're like magical internet elves, cobbling games rather than shoes while we sleep. Black Box, the latest puzzle from On of Eyezmaze, is the first title from the much loved developer that will cost you a little something if you want to play it all the way through. Donate a dollar or more by clicking on the appropriate button within the game, and you'll be given a password that unlocks the whole thing, since only the first half is available to play for free. Please do not post the password

in the comments. After all, wouldn't you consider a dollar a more than fair payment for someone who has given you over eight years of entertainment for free? If you don't want to donate, you can still play through the first chunk, but trust us when we say you'll definitely want to know where this one is going... it's just that odd.

The actual game is what you've come to expect from Eyezmaze... a surreal little gem full of strangeness, wonder, and an almost unhealthy level of cuteness. Just click to interact, and try to figure out what to click on and when in order to advance through the game. Some objects can be dragged around the screen as well. Like all of the developer's games, Black Box is more than a little weird, and will success will depend on experimentation rather than logic unless you hail from some bizarre robot dimension. The game itself is actually a bit longer than most other titles from On, and unfolds like some crazy Rubik's Cube crossed with a Rube Goldberg device. If you want to help fund the next series of Grow games, or just give a little thank you to someone who has made you smile for free so many times, then you surely won't mind the small entrance fee to yet another beautiful, silly, and imaginative puzzle from our friend Eyezmaze.

Thanks to Cynthia for sending this one in.

Definitely recommend donating that dollar if you can afford it.

I sent a one dollar donation to on about 25 minutes ago but he still has not sent an email back, how long do the password emails typically take?

I got mine 3 minutes after the PayPal payment was sent.

Probably a stupid question, but you are checking the email that is used with your paypal account, right?

I had a guest paypal account but I still used my regular email.

First time in probably a year that I check jig, and what's on the frontpage? awesomeness.

Just shelled out $2 (big spender) and am impatiently awaiting the password! I can't wait to play the rest of this.

@nerdypants: Assuming he lives in japan, it's currently 6:50 AM, give him time to wake up, he sends them manually.

Just finished! That was incredibly fun.

after the jigsaw. i made it up to that point but then it asked for a password, so i typed it in, and suddeen;y it said the game was over. According to the walkthrough, there's nore to it. am i missing something?

You need to donate at least a dollar to play the rest of the game.

Just to say that I paid using paypal and got the password in email in less than 5 minutes. I guess they're awake in Japan. I paid a little extra to make up for the free amazing games from eyemaze over the years.

So... impossible to complete without sound, then?

Putting aside that quietude is a relatively common requirement in Flash gaming, the fact that there's a built-in mute button really highlights the necessity of sound as a design flaw.

It's not impossible to complete without sound, but it is slightly harder.

I made my donation but I can't continue past the jigsaw puzzle even though I entered the password. Does the password include the punctuation marks after the letters as in the email?

Have you tried it both ways? That's what I would try if the first attempt didn't work.

To answer my own question - yes the password does include the punctuation marks!

Fantastic game, I can't wait for the next one!

Hi, I wonder if any JIGger can help... I did tip (and gladly), but it is now 24 hours later and I haven't received anything.

(yes, I checked the spambox)

So I wrote an email to the author, but no reply came through...

Does anybody know any other way to make him notice my desperate situation of still-hanging-on-half-a-puzzle fan?

@bubism: I sent you an email to the address you used when creating your CG account.

By the Power of Posting, the author sent the password about 2 minutes after I posted here...

...and I finished it, peeking at the walkthrough only one time.

However, if you restart the game after completing it, the apple-eating creature will appear already hatched - is this a hint toward the typical Eyemaze alternate ending? I couldn't find any...

This might be the best Eyezmaze game in a long time. Sure, it's light on branching paths, but the mind-bendingly creative animations exceed even my highest expectations from On. Well worth my $1, and I can't wait to see what he brings next.

The game window is too tall for my screen.

Is there a way to change that?

First, I love all things Eyezmaze and am so happy to have a chance to give support.

the dial! I have tried it multiple times and even reset, but I can't hear any difference at all as I go around. Any tips here?

@ecru: You can try to play the game by zooming out the view in your browser [CTRL -] but most Flash games don't display properly when your browser is at anything other than 100%, with varying results. This particular game will crop the outer edges of the game (top, right, bottom and left edges) when zoomed in, but the game may still be somewhat playable like that. Try it and see.

Oops, got it now. The rods actually go in a different order than what is described in Step 15.

[The walkthrough is correct, we just double-checked it. -Jay]

Level 25 seems to be buggy. Does it mean MY right or the balloon's right? The rods aren't staying where the walkthrough says they go.
Does anyone have a screenshot of their placement?

I loved this game and so did my mom and I was happy to donate a few dollars to be able to finish it. It's so much fun and adorable quirkiness it makes you want to play it again as soon as you reach the ending.
Thanks for the rec!

I sent him $10, because this man *ROCKS*. Wish I could afford to have him make a game for our business! I still don't have the code yet, but I don't expect him to be on hand every second. Quite willing to wait patiently. On the rods part, I put them in that order and I'm not finding any coin...?

I'm still confused about the "fishbowl under the lower left rod" part.
Help me :I

Hey, could someone send a screenshot for the fishbowl part?

Never mind on the fishbowl but the dial!

I've tried all combos and i still can't get it!Help!

ok. Everybody finished this game. But i just discovered it--it's fun. Sent them $5 but no password. Game stopped after finishing jigsaw. Hand appears but nothing clicks or happens. Is it too late to play? Am i living in the past?

I believe the passwords are generated and sent automatically, so you should check your spam folder to see if your email client or ISP sent it there instead.

I know this is a detail, but there is now a download version available, so I wondered if you could add the "download" tag.