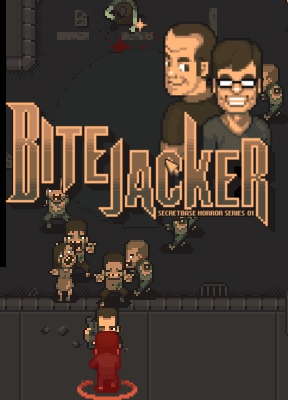 Bitejacker: Secret Horror Base Series is an action-packed RPG-like zombie shooter based on the indie game review show that goes by the same name... well, give or take a consonant, at any rate. The story behind Bitejacker is a pretty simple one: the protagonists were busy doing a video shoot when a zombie burst through the door. Being steadfast gamers, neither attempted to approach the somewhat unhealthy looking individual and instead proceeded to run screaming away in the opposite direction. Somewhere along the line, they also get thrown into a time warp that can only be broken after the unlikely heroes have fufilled certain criteria like unlocking monsters and gunning down bosses.

In Secret Base's first official release, you'll have the choice of playing as either the host Anthony Carboni or cameraman Jon Riveria. Standing between you and the distinction of being the individual with the highest digits on the scoreboard is a ravenous, rabid horde of pixelated zombies, one so awesome that it also includes undead incarnations of characters from famous indie games.

As can be expected from an isometric shooter, the controls behind Bitejacker are relatively easy to handle. You control your character's movements using the [WASD] keys; aiming and shooting is governed by the mouse. [R] is used to reload your weapon, the [spacebar] is used to execute your character's special and [E] is your action button. For the most part, gameplay consists of you attempting to navigate from Point A to Point B with Point B being a well-fortified shelter of some variety. Along the way, you'll likely encounter a number of survivors, some of which might fight alongside you while others just trail along in a somewhat dazed fashion.

While this might sound like a lot more trouble than it's worth, there's a pretty compelling reason to save as many people as you can. Each time you finish a stage, the number of survivors you bring in is calculated and you are accorded an appropriate amount of cash, cash you can only otherwise earn from looting debris and picking up the strange golden coins that dead zombies drop. Seeing how there is a neverending tide of zombies and both your ammo and health does not immediately and mysteriously regenerate, rescue missions are definitely the most convenient method of generating money. There's also an achievement-based system that allows you to improve abilities, unlock new items and even release monsters. Ammo is limited, friendly fire an occupational hazard. 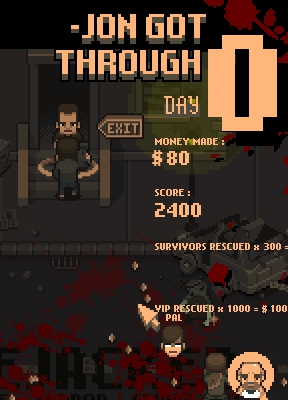 Analysis: Bitejacker: Secret Horror Base Series is a visual treat. Though most of the game is rendered in sepia overtones, there's a ton of details laid out like a decadent buffet for the true gaming fanatic. From the suspiciously familiar question mark-laden boxes right down to the delightfully low-rez celebrity cameos, Secret Base has gone above and beyond the call of duty in their attempt to get everything right. What I liked most, however, are probably the celebrity zombies that you'll eventually unlock; something that I'd love to gush over but will leave that to you to discover on your own. Sound-wise, I'm somewhat ambivalent about what the game offers. Bitejacker features a suitable retro soundtrack, something that wouldn't sound amiss on the older consoles or even an arcade machine from the days of yore; I found it a little annoying but your personal mileage might differ. I'm told that the voiceovers are remarkably spot-on but along with the sound effects, I found that they complemented the action rather well.

I personally rather liked how Secret Base chose to implement an achievement-based system in the game, something that immediately helps make up for one of the weaknesses common to Flash games: replayability. There's a pretty substantial amount of things to unlock, something that will keep completionists trained on the game for a decent amount of time. On the flip side, given my love/hate affair with first person shooters, I could have done with greater variety in the available arsenal; there just weren't enough guns for my taste.

Secret Base has done an excellent job at delivering on a trite formula, an impressive accomplishment given that Bitejacker: Secret Horror Base Serries is apparently their first official game. In accordance to the overall retro flavor to the game's atmosphere, Bitejacker is also on the unforgiving side; death is usually followed by a lot of cursing as you part ways with a substantial amount of cash to restart. Failure is definitely not an option here. Though not overpoweringly difficult at first, Bitejacker's difficulty increases substantially around Day 5 or Day 6 when lag and overwhelming numbers become your biggest problems.

The game doesn't seem to make even a token attempt to make you feel sympathetic towards the plight of the characters involved. In fact, it's sometimes rather hard not to giggle hysterically as a survivor with exceptionally bad pathing skills get overwhelmed by zombies. But seeing how zombie-related games are often swamped with melodrama and viscera, it's pretty refreshing to come across something that refuses to take itself seriously even at gunpoint. Bitejacker will eat away at a lot of your free time and you'll thank Secret Base for it.

Just wanted to say that I LOVE games like this, where you upgrade a skill by actually doing it. It makes more sense and allows the game to tailor itself to the player. Just in case anyone cared.

On a completely different note, is there any way to stop the lag? I have a relatively new computer with good internet speed (Dunno if that actually matters) and would like to play the game as it is meant to be played. Any suggestions?

[Internet speed only affects the time it takes to download (load) the game into your browser. Your computer's CPU affects the relative framerate (lag) when playing. If you're playing in Firefox, try closing all other tabs/windows while playing. Or, try using Chrome, it's multi-threaded and Flash runs faster in it. -Jay]

Ah, so my CPU just stinks. Oh well, Thanks for the tips Jay!
It's worth playing through the lag to experience! Whoo!

A great, Nintendo-hard shooter. Reminds me a lot of Scott Pilgrim Vs. The World: The Game! The devs did a great job making this retroey, including difficulty. I'm signing this up for Best of JayisGames 2011. Can't wait for the next one!

The game has really high requirements, on my PC it lags up to the point of being completely unplayable