Billy's Nightmare is a memory-style puzzle game from Ravegan. Billy stayed up all night playing video games, you see, and now he's having trouble sleeping thanks to the nightmarish creatures invading his dreams. By watching the patterns of lights on each monster you can help Billy fight off the foes one by one, all in the name of a good night's sleep. 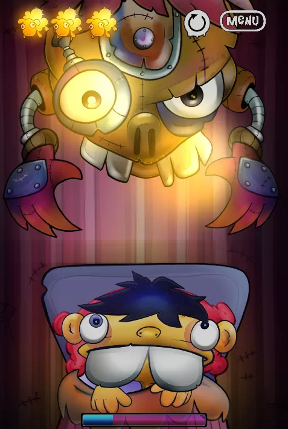 Enemies come in many different form, but two things they always have in common are eyes and teeth. Each round in Billy's Nightmare starts with the enemy flashing a pattern on these four points. All you have to do is watch the pattern then repeat it by tapping on Billy's eyes and teeth. Keep acing the sequences and you'll defeat each villain, moving on to longer and more difficult patterns. Get too many wrong and Billy will wake up!

Billy's Nightmare features three different pattern modes, the latter of which utilizes taps, holds and multi-touches in each sequence. The challenge moves at a gradual pace and features different scoring frameworks that range from being error-based to time-based. Even if you have the short term memory of a drunken goldfish, Billy's Nightmare is worth checking out. The artwork alone will give you something to nod and smile about, and the simple gameplay might just get you hooked.