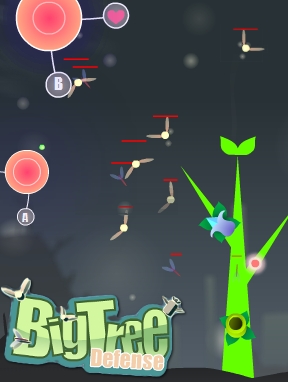 In general, I am not good with plants. My best efforts at providing them with a loving, nurturing environment seems to do little more than depress them, leaving me with planters full of dejected looking, wilted brown foliage that probably long for that one last sunset to end their suffering. So naturally, when I heard that Burstyx Studio had created a defense game centered around, essentially, caring for an enormous plant, I was a bit apprehensive. Thankfully, it turns out BigTree Defense is a bit less complicated than caring for an actual living thing. But only just.

The gist is this; evil alien bugs are swarming towards the last plant on Earth, and you have to defend it by making it grow larger so you have room to place various pods that attack the bugs. Click on the plant to grow or heal it, and click on the red nodes that pop up to either place a plant pod, or grow a branch. Killing a bug grants you water, which you use to both heal your plant and purchase upgrades. Completing a level earns you points that you use to buy new pod types, or upgrade your existing ones. You have a limited number of pod types you can equip each stage, and choosing the correct ones is part of the strategy.

See, you aren't just dealing with any old bugs here. Each one has its own weaknesses and flying pattern, and slapping down whatever pod you have available is a good way to see your hit points vanish and your BigTree topple to the dust. Your pods all have various helpful abilities, but they have limited range, so you'll need to think carefully about which ones you put down and where. Don't worry if you fail a level; you'll still get some points for it to spend when you try again. Hooray, failure! 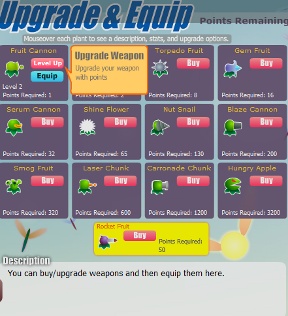 Analysis: It's a clever concept, growing your own base of operations, and BigTree allows for a fair amount of customisation. Sort of. While you can build the labyrinthine, skyward-straining plant of your dreams, you'll soon discover that if you aren't thinking and planning out your progress you'll lose quite quickly. Most levels, in fact, will probably require at least one retry; strategy and planning plays an enormous part in your success, and figuring out the best approach for each level requires some trial and error. I actually wish the game had been presented in a bit more of a cheesy, 1950's style science fiction movie that would have gone over well ("BUGS... FROM... SPAAAAAAAAAAACE!") than its current look and feel, but there is something appealing about its dreamlike aesthetic. Um, presuming your appealing dreams involve masses of giggling, bloodsucking insects swarming all over you, their tiny little legs crawling over your skin and... eeeughgughgughugh.

The problem is that BigTree doesn't control nearly as smoothly as it should, making on-the-fly strategic changes somewhat awkward to implement. When things get frantic and the enemies start swarming in bigger numbers, it can get difficult to click on the right spots on your plant since the little nodes can be finicky about just where you put your cursor. The branches themselves are particularly fiddly. Maybe if your plant's growth carried on into the next stage, rather than requiring you to start from scratch each time?

Defense games have a bad rap, and it seems all you have to do is say the "D" word to watch lips begin to curl and noses begin to lift upward. This is partly due to the fact that they appeal to a certain group of people, and partly because they all look and play so much alike that the vast majority of them are practically interchangeable. BigTree Defense offers a slightly different take on the genre, with some clever mechanics that, although tripped up a little by some clunky controls, makes for an altogether more . It's also really, really weird. It's not quite as instantly accessible as that other plant defense game you may have heard of, but it's a clever new twist on an old concept that should offer enough challenge for fans. And the next time someone asks how your garden is growing, you can just show them your lush browser to downplay the shame of your sad, neglected, patchy back yard. Bonus!

This game is awesome. I played the first two levels and can totally see how the difficulty is quite harsh. The tutorial was simple. The first level was a little harsh, but I scoffed it off (lolrhyme) on me being new to the game. Then I got to the second level and somehow passed.

The point system for buying items is good, but unlike most upgrade-games, merely upgrading everything isn't going to help you win instantly. Thank god you can reply levels and earn more points, because there is no way I'd be able to beat the first five levels without going back and getting more weapons.

And, like the analysis said, the planning in game is what makes or breaks a level.

As my daughter would say..."..meh..."
I tried, and after about 3 minutes, gave up. Too much going on, not enough thinking time at the start, and it is so darn confusing!
So I went and played Canyon Defence, and Viking Defence instead!Can't beat those for fun.

Grr, was sailing along fine, but I cannot get past the end of battle 8 - I'm using laser turrets to get past the early single enemy swarms, but then find I get overwhelmed at the end by the really fast moving enemies - I just cant seem to kill them and then they go and get full health again...argh.

Hi JIGuest,you cool get in battle 8, for the fast enemies, you can use Smog Fruit to slow them, for crowds of enemies you'd better to use weapons that has good splash range for example Carronade Chunk.
And note that the back with full health because they had returned to a Insect Hole which recover HP, so take a look at Holes to see what they will do before waves come is very important, remember that you can use mouse wheel to zoom in/zoom out the scene to get a better view.

there's not enough down time to set up your towers in the beginning and the branches are tedious to move around. also the joints should be easier to see. 2/5

Thanks Burstyx Studio, I actually found that

were pretty useful for that level (and pretty good for most things tbh).

On the whole I think it's a good little game, the main annoyances were it being hard to click on the right part of the tree/plant during the heat of an insect attack.

I agree that slightly more time at the start would be useful, and I don't think it would detract from the game in any way.

the key to winning this game is DO NOT UPGRADE GUNS. surprisingly... upgrading your guns is totally and utterly useless.

1. when you need to heal, upgrade your main tree (dont repair it for hp). upgrade doubles your max hp AND heals to full.
2. just make LOADS of branches and put the most basic gun on it. every time you upgrade the main tree, upgrade all your branch lengths to accommodate more guns. NUMBERS is key.
3. once you hit 1k water regularly, start replacing the basic gun with the rocket launcher.