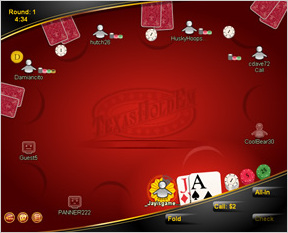 Bicycle Texas Hold'em is a free-to-play tournament-style card game for eight (8) players and available through Microsoft's MSN Games portal. Although primarily a Web-based Flash game, you will need the Windows operating system and IE to play it due to the ActiveX controls the game requires.

It is a fairly standard game for its kind, featuring rounds of increasing blinds and classic all-in, no-limit betting. The buy-in is $100, though no actual money is ever won or lost in the game.

One of the criticisms of online poker games is that you lose the body language clues that can play an important role in determining whether to bet, call or fold. What sets this game apart from others is the addition of "digital tells" revealed as animations that occur when players: look at their cards, examine their chips, examine the pot or the chips of other players. These subtle clues could potentially tip the cards in your favor if read correctly against the player being observed. While no "tell" is a guarantee since even tells can be faked, it does indeed add a dimension previously missing from online poker.

To play Bicycle Texas Hold'em you will need an MSN account, which is free. Just register, select a nickname, and you're good to go. Once signed in, click the "Play Now" button to load the game and get to the main game menu. From there you will find three (3) modes to choose from: Vs. Computer, Quick Match, or Invite a Friend. Computer opponents in this game are rather dull and very easy to beat so I suggest playing against real human opponents if you want a challenge. If you have an MSN Messenger account the game apparently interfaces with that and will allow you to invite your friends to a tournament. That being said, I recommend selecting the QuickMatch option because that is where all the action is.

Once in QuickMatch, choose between a 'Standard' non-rated game with no turn timer, All-in Hold'em, or Heads-up play against a single opponent. The real deal of these three choices is, of course, the All-in Hold'em game, which will factor into your overall rating and, more importantly, the system will try to match you against other opponents of your skill level. The game keeps track of your statistics and your overall rating if you decide to play rated games, and your wins and losses are factored into the computation. All-in Hold'em is also where most of the online players are.

Analysis: I have been having a lot of fun playing this game, and I've played with many nice people online. Of course, the higher my rating has climbed the higher calibre of player I am being matched with, which also increases the quality of play experience. Having a higher rating, however, does not prevent the lower rated players from appearing from time to time, but they are often eliminated before the end of the first round.

The digital tells are a welcome improvement and provide just enough additional information to make it apparent that you are playing against real people. Some players reported to me that the little animations can be distracting, but there is an option to turn them off if that is the case with you.

My biggest complaint is with the matching system responsible for collecting 8 players together for a game. Often at least one player will fail to join and the system must then find another to fill the empty space before a game can begin. The problem is that the matching cycle often takes longer to wait through than the time it takes a player to quit out to the menu and request another game. In fact, many players have realized this and will begin to drop out immediately as soon as one player fails to join. From my observations, the more players that do this the more difficult it becomes to actually get a game started.

Another issue is that sometimes cards that are folded appear back on the table in front of the player that discarded them. Although they are generally in a different orientation to the cards in play, it can make it confusing to keep track of who is still in a hand.

These are rather small nuisances to an otherwise excellent effort. Microsoft's Bicycle Texas Hold'em makes no bluff about raising the bar with the introduction of its digital tells that bring you closer to your online opponents.

Nice to know you're still playing poker. I really liked the seeing the tells, it was helpful. On the downside, it took a really long time to get a table.

Btw, some of the players on Lastcall are creating their own poker site that will mix in rpg. It should be up soon, right now they just have a forum thread - dragoneyepoker.com.

Just had a go at it and it sure looks nice but there are some things not working right.

My stats don't upate after winning a tournament, and money you won in the game doen't get carried over into the next game(s).

That's a real shame, because there's nothing more fun than entering a game with a load of cash in your bank :)

I've been playing Last Call Poker for a while. Loved it! But I can never connect to the rooms anymore for the last couple of weeks.

So, does anybody here have any other recomendations for free online multiplayer poker games? As fun as Last Call?

slgalt - thanks for the word about dragoneyepoker. I'll keep an eye out for it. If it's anything like Last Call was, I'm gonna love it! =)

hijinx - the difference is that Last Call was not tournament style poker, meaning you could join and leave a table at any time. In this game, all players join simultaneously and with the same number of chips, and then players are eliminated as they lose all their chips eventually leaving one player as the winner of the tournament.

What does carry over is your rating, which is used to help match you against others of similar skill level.

I see.
There's something wrong with the ratings though, because it still says I haven't played any hands or won any tournaments. And I did.

Hmm. The site seems to have kept track of every hand and game I've played. Did you try reloading the page where your stats appear?

Nevermind, I take that back. All of my stats just disappeared. Maybe they are reset every so often?

cleaned my cache and cookies, logged out an back in and it's still the same.
No stats. Hope they fix that soon.

Likewise, hijinx, and my stats are also failing to update.

It appears there is indeed a problem, though I expect it will be resolved soon enough.

Statistics seem to be working once again. =)

How does the rating system works?
The lower the better?

I've been looking for a good tournament poker game for ages and in my opinion this is by far the best play money version on the net. Although i'm not sure how useful the digital tells are they give the game some character and make it feel much more real. The increasing blind structure feels just right and I like all the stats. Currently mine are :
Rated Games 7
Average Rated Place 3.14
Rated Wins 1
Rated Winnings $400
Rating 1707
I need to play more games :)

My rating has dropped to the low 1600's due to the game crashing on me during 5 of the last 7 games I've played, which has unfortunately affected my rating negatively. My rating has been consistently in the mid 1700's and even in the low 1800's.

I am becoming a bit discouraged with the crashes, though. It seems to be crashing more now than it did when I was first reviewing the game.

It's pretty cool. If you win too much, the bad guy shoots you - how you actually 'win' is a bit of a mystery!!

I've been playing this game since Jay reviewed it and have become rather fond of it. In the last few days, however, I have been unable to access it from either computer in my house. When I try to start a game, I get the "All players have left the game" error message. I've done everything MSN's support pages suggest, have tried disabling my firewall and even installing a new version of IE. Can anyone help?

Hi Liz - I continue to play this game often as well. Unfortunately, it appears to be down at the moment, though I'm sure it is only a temporary condition. I'd try again tomorrow.

This game has crashed on me quite often, negatively affecting my rating.

I've stabalized the game somewhat, by uninstalling the IE beta I was running, and MS reccomended upgrading my flash client as well.

I've been able to get my rating up to the high 1600's, but the game still crashes on me occasionaly.

Can you please explain how the rating system works?
I am trying to follow it but one time i won and my rating became higher and the next became lower. Is lower better?
Also the average rated place does not make any sence...when i had 29 games with 5 wins my average rated place was 4.37 and now my stats are:
Rated Games 30
Average Rated Place 4.67
Rated Wins 6
Rated Winnings $600
Rating 1660
Great game...the best i've ever played and i play poker for a long time.
Thank all

Biggest problem with the game is that the cards are not dealth with randomly, but instead are passed out using an "action maker" algorithm. Some people like to see straights every few hands, but I think the game is more fun when the cards hit the way they do in real life.

For example, when playing down to the final two on the board, we were both dealt A5 and it flopped another A. After we both went all in, it dealt out another 5 and then another 5.

You have to play a lot to realize it, but all the very best players I've chatted with think so.