Somewhere in the American Midwest, something strange is afoot. Crop circles are appearing. Cows are disappearing. All signs point to an alien invasion! "Beware Planet Earth!" is a zany tower defense game from indie developer Lightmare Studio. It's up to you and your friend Barney (who has unfortunately locked himself in the outhouse) to repel the ugly green monsters before it's too late. 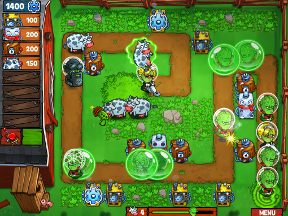 Luckily for you, Barney is a genius with machines. You give him the materials, he'll make you up some slick defenses. The most basic (and essential) piece of machinery is the cog factory. It bakes up gears that you have to collect, and which act as the currency you need in order to place the other machines along the trail. Barney devises an array of attack machines, made available to you over time. Using just your mouse, drag and drop your towers to open spots in the field. You'll have to strike the right balance between cog machines and towers so you have enough supplies, but also enough firepower to hold the aliens back. After you place a tower, there is a cooldown period before you can place that particular tower again, so you need to plan for that as well.

The aliens follow a set path toward your cows each level. There are often multiple crop circles where the aliens beam in, though the paths always converge eventually. You have a set number of slots for towers, and before each level you select from a variety of towers to fill those slots. More choices and slots become available as you progress in the game. You get the chance to see the map and which enemies will be approaching before you choose which towers to use. This allows you to plan accordingly, and choose the best machines to suit each challenge.

You have a set number of cows to defend each level. If an alien breaks through your defenses, don't worry. Even if they manage to pick up a cow, they have to carry it all the way back to the crop circle in order to abduct it properly. This gives you time to rescue it and let it mosey its way back to the field. And if they do get one or two of your animals, don't despair. As long as you have one cow left at the end you'll be able to move on to the next map. 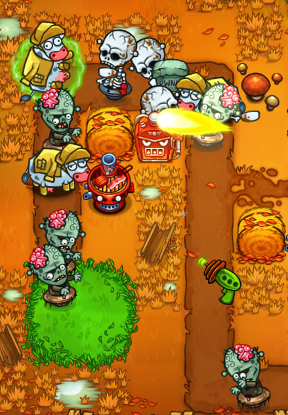 The main story is comprised of the four seasons, each with unique attributes that try to hinder you in some way. As you play, challenge modes are unlocked and playable from the main menu. These consist of a pre-determined number of cogs available, as well as limited selection of towers. And for those who thrive on achievements, there are plenty of those to go around.

Besides the towers, you have also managed to collect a laser gun dropped by one of the invaders, which you can now use against them. This zapper is vital to the gameplay. Use it for destroying hay bales, to make more room on the field, to destroy alien shields, or to super charge your towers, among other things. It overheats easily though, so save it for when you really need it. There are also various types of bombs that are placed directly on the path that can help weaken the enemies or save you in a pinch.

Analysis: If you think a lot of what I just described sounds like Plants vs Zombies, you'd be right. Lightmare has drawn several gameplay elements from the PopCap hit, and lists the game as an inspiration on their website. But you'd be dead wrong if you think this is just a clone. "Beware Planet Earth!" has plenty of originality, as well as its own sense of humor. The integral role of the laser gun alone is enough to set it apart from others in the genre. While normally a mouse-only gamer when possible, even I was wishing for a hotkey to grab the laser in tight situations. But the franticness is part of the fun.

Some may think the game is too easy, and while the early levels are fairly simple, it does get more difficult as you go along. If you still think it's a walk in the park, the developers tell us there's a Veteran's Mode on its way, which will be a free update when it is complete. This mode promises to challenge even the most experienced defense gamer.

The towers have a lot of personality, and the profiles of the aliens and your interactions with Barney will make you chuckle. The atmosphere of the game is early sci-fi, complete with a theremin in the soundtrack. If you loved Plants vs Zombies (and even if you didn't), this game is worth taking a look at. There is a free demo, so there's nothing stopping you from checking it out. Someone's gotta defend the beef!

Thanks, Kimberly, for the walkthrough!

I'm a huge fan of Tower Defence games. I've played a pile of them on Kongregate. I loved Plants vs Zombies. But the Beware Planet Earth! demo's convinced me not to buy a game.

The level where you get the BBQ was just too tough for me. Without having the equipment introduced gradually, being plunged into this level, after the very easy previous level, it was tough. I've played and replayed the level and I just can't get passed it. It goes too fast, too frantic, for the 4th level I get to play. There's no hints, no tips, no suggestions for what I'm doing so wrong that I can't get by the level.

You are right that the demo, wanting to show you the variety of towers available, does jump too fast. However, the game itself does gradually introduce the towers making it easier to know how they all work. I still think that demo level is one of the hardest in the game.

You can close the portals by zapping them with the gun.

Thanks, Kimberly, for the walkthrough!

Thanks for all the tips. I worked out what I was doing wrong. A combination of building BBQs instead of the lower-cost towers, using the zapper to take out the first aliens, and knowing I could zap to remove the shields the scientist made helped me past that level. Now just 1 level on the demo to go.

While it's nice to have a demo that's actually a proper demo and gives a taste of a lot of the game, and allows me to play for as long as I want, I can't help but think if I'd a 1 hour free trial instead, with all the easy levels and gradual progression, I might be more inclined to buy. It's just so difficult.

I don't find the later levels easy at all, at the moment i am stuck at fall level 10.

It is a little bit annoying when I fail to complete a level that I have to klick through all the messages from Barney again and again.