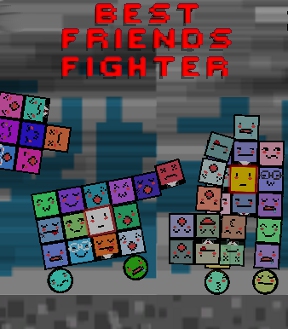 Best Friends Fighter by Glitchy Pixel took home third prize in our 9th Casual Gameplay Design Competition. In a nutshell, Best Friends Fighter is what its name implies it to be: a beat 'em up fighter game. When a treasure falls from the sky, two boxes who were once best friends decide both must have it, and the only solution is to duke it out. Best Friends Fighter pits robotic entities comprised out of many, many blocks with faces against one another.

Yes. Faces. Happy faces. Sad faces. Faces with tongues stuck out. Faces that look rather constipated. There's a Facecube for all occasions here at Best Friends Fighter. In the arcade mode, the game begins with players being asked to select one of five different colored cubes to represent their heartblock. Should this cube touch the ground, it would spell an automatic loss for the player. After that, Best Friends Fighter will present the option of either selecting an automatically generated robot or constructing your own. While it's perfectly fine to have the game create your fighter for you, the real meat of the game lies in the development of your cubical champion. 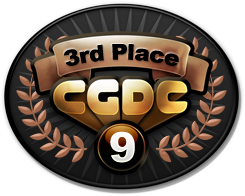 Fair warning, however, if you're the impatient type, you might want to skip out on this aspect of the game. There are two types of robots to design and three components to work on: the body, the legs and the weapon. Each segment of your robot consists of anywhere from four blocks to twelve blocks. While this might seem simplistic at first glance, it isn't. There are three rather self-explanatory statistics to consider as you build your robot: speed, constitution and strength. Because the statistics are randomly generated for each block and also because the selection of Facecubes is rather limited, you'll find yourself spending a fair amount of time deciding whether you'll want to skip to the next batch or implement the best cube available somewhere. Mind you, you can only skip batches up to five times.

While tedious seeming at first, there's a strange satisfaction to be earned from building your own robot. Because your control during the actual fighting is limited to moving your robot left and right using the [A] and [D] keys, victory becomes highly dependant on both the statistics of your robot as well as your sense of timing. For example, if your overall constitution is too low, you'll find yourself crumbling at a friendly nudge. On the other hand, a well-constructed minion might allow you to simply roll over your opponent and win. Alternatively, if you opted for the vertically-challenged variety of robot, you could just beat the other guy's knees in.

Best Friends Fighter comes with a multiplayer mode that allows local players to duke it out with their wildly swinging representatives in the game. Charmingly retro in appearance, the visuals don't set any new standards in the industry but they serve perfectly in their capacity. I do, however, adore the chip tunes they've employed for the game. The upbeat, bouncy chords that abound in the game complement this unusual fighting game perfectly. 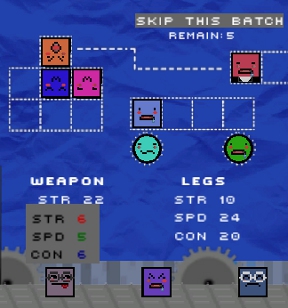 Analysis: On some levels, Best Friends Fighter resembles traditional fighters like Tekken or Soul Caliber but the fact remains that all you're really supposed to do here, once you've concluded your construction work, is wave the robots left and right. Make no mistake, a certain amount of finesse is required in the execution of this but I'd have been more thrilled if they have provided a little bit more interaction; the ability to control the hammer would have made things pretty much perfect.

Still, Best Friends Fighter is, all said and done, a pretty smashing accomplishment for something crafted in such a limited time frame. In many ways, this is probably my favorite entry amidst the others that were relayed simply because it rather well conveys the way best friends fight. You know what I'm talking about. You trade blows, physical or otherwise. You yell at each other. You make funny faces... but at the end of the day, there's still that sense of camaderie. Though blocks come smashing down in a profusion of colors, they never quite lose that happy vibe.

Overall, though, the game is a pretty darn spiffy take on a tired old genre. Earnest and peculiar, it's one of those games you should play while depressed as the cute facial expressions and cheerful tunes are more than likely to chase away lingering blues. Being the anal-retentive Asian that I am, I was especially enraptured with the fact that I could make my own robots. While I do feel this urge to go 'Why can't I make guns to go pew pew', that might just be asking for too much. However, I think I would murder a chocolate bunny for the ability to save the design somehow and relay it to a friend. Nonetheless, there is always room for further expansion given the success Best Friends Fighter has seen this time around.

I can't get it to work. I just get a big empty square.

[You'll need Javascript enabled, the Unity plug-in installed, and Flash to play this game. If you're still having trouble, please report what OS, browser, Unity and Flash plug-in versions you have installed. -Jay]

I'm very surprised this game did so well against some of the other contenders. Probably there is more to it than I'm seeing. I found the limited options and movement frustrating compared to other fighting games.

This is my first comment here on JiG. I don't normally leave comments on casual games sites because, well, it's a CASUAL experience. BFF is a VERY solidly built game (I'm also normally not that punny) with very few negative attributes. I would have liked to have more information regarding overall toughness of 'bots, and a means to better control the hammer. Other than that, I loved it! [^_^]

Although the game never tells you, you do also have the ability to jump...well more hop, but you get the idea. Everyone seemed to think it was useless, but jumping was a major part of my strategy. With a well-timed jump a much weaker bot can completely decimate a stronger one.

This game has a major issue that still needs to be worked out. My weapon will spontaneously fall apart before a round making it impossible to win. The game is unplayable to me and I don't see how it got so many votes with such an obvious glitch.

Like Adam, I have a few issues as well.

I spent a bit of time checking over my robot, seemed to have some pretty good stats going, high speed for my legs, good defense for the body, and one butt whooping hammer. I even tried to strive for a balance so that nothing goes too far skewed in any particular direction.

Round one starts, my legs collapse under me right before my hammer takes one good swing, and goes flying off onto my opponents head.

He lost about three blocks, I was a sitting duck and lost in no time flat.

Back leg dies, I fall backwards. My forward locomotion is solely being provided by the hammer of ineptitude, which falls apart faster than a Uwe Boll movie.

I looked like one of those old bath toys with the legs that flap for you after you crank the dial a few times.

I just collapsed. The CPU didn't even have to move, my legs fall apart, my body blocks die when they hit the dirt, and I just fall out of the unit and hit the ground, instantly losing the round.

This game could be fun, but whatever they use to calculate damage and stats needs some serious work.