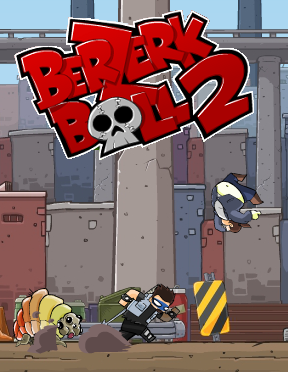 Man, it's been two years and a half years since the release of Home Run in Berzerk Land, and you would have thought that by now we would have developed a way to physically slap annoying people over the web. Oh well, as usual, our dreams far outpace our technology. But if you'd still be interested in taking out a little rage by using a cricket bat to launch a facsimile of a fellow internet user into the ionosphere, then it's nice to know that Berzerk Studio still has us covered: Berzerk Ball 2 is the latest in the series of action games that demonstrates how hitting-stuff-with-other-stuff will never get old.

After choosing your character, you will be presented with a geek to launch. Using the meters, click to determine the power and angle of your launch. Once airborne, your character will have a certain number of Power Smashes, activating by clicking. These smashes will give the geek a little more speed with a Meteor Attack, or, if close to the ground, smash him up to the sky with a Hell Raiser Various obstacles will either slow the geek down or blast him further. Your distance will determine how much XP is added, with each leveling up granting you skill points to distribute amongst various stats. Crushing obstacles will earn scrap to be spent on various weapons and stat-boosting items, as well as regenerating your power smashes. Crush enough stuff over several launches, and you'll fill up your Rage Meter to unleash a super attack. Reaching certain milestones will unlock minigame challenges. Do well enough on those, and soon, other members of your team will make an appearance during launches to help you out in various ways. Earning achievements will give you precious metals, which can also be earned at a Daily Spin. These metals can be traded at the blacksmith for random quality items. The more you play, the more customization there is, and Berzerk Ball 2 is definitely a game designed for the long haul.

For a game with such slam-bang action to it, Berzerk Ball 2's pace is surprisingly methodical. Every time it seems that all the game's wrinkles has been revealed, and that it's about to fall into that old launch game pattern of upgrades and clicking, a new element, a new feature to unlock becomes apparent. No doubt this unlocking is a little slow at first, which is sad since the earliest bits are the most familiar. Those who stick with it, though, will find it very much worth their while. Admittedly, the presentation of Berzerk Ball 2 is as jam-packed as its content. It seems to be a game which was created within the limitations of mobile device screens, and sadly does not take advantage of the larger resolutions of the browser window. Things definitely get a little cramped. Not so much that it affects gameplay, but it can be a little overwhelming to the senses. That said, it's hard not to like Bezerk Ball 2's addictive gameplay and gleeful biting-the-hand sense of humor, and, when it comes to dealing with the frustration of dealing with dismissive online malcontents, it's a much healthier option than putting your fist through the monitor.

Tricky pretty much said everything you will ever need to know but I have a few other tips. Spoiler because some people like to learn for themselves.

-I recommend using the Hell Raiser trick noted above by Tricky, not only it is actually useful on this game compare to most but it increase your height AND speed, best of both worlds making the Meteor Attack the weaker choice here. Use the rage meter just like you would use the Hell Raiser, in the case of having both ready I recommend using the rage attack first as it is generally more useful while refilling then it is having it full for too long. With that said if you have full stamina then use the Hell Raiser about twice so they can fill while your Geek is on fire by the rage.

-Do not worry about challenge rewards. The challenges also have a level which for a 100% completion is a pain as it will require some grinding. No doubt you will get the reward by pure luck alone if you are planning to max the challenge level.

-There a limit of how many weapons and such you can have so trying to unlock all of the weapons is pointless and don't give any kind of reward. With that said the blacksmith and spiders can make items that easily outclass anything in the shop so try to buy as little as possible from it.

-While the game seem to support facebook stuff and even buying stuff with real cash, the game is really pretty casual. You can earn anything the game offers and the facebook stuff rewards are honestly not worth it unless you want to do it. A bronze bar is something you can buy yourself after a single launch later in the game for example.

-All of the upgrades from leveling is pretty good though it is worth noting that Bruiser only increase something that you may use only three times max in a launch endgame. Even if debatable of how useful it is you really should use it to increase your max speed and save yourself a Hell Raiser during launches when you have the rage meter for it, I just don't find it worth leveling personally.

-Nothing in the air hurt you while there is one thing on the ground that does. Stay in the air when possible.

Fun game and one of the few that can have so many features without lagging my old computer. Quite amazing.

This game is really boring. I don't get it why people so like. And here is main issue I don't like about this game - when I hit the geek it's like a 2 different screens. No connection between. I hate this most.

For �One is silver and the Other's Gold�

It seems the items need to be of the same type. I got the achievement with a silver poo statue and a gold poo statue. I tried equipping silver lucky coins and a golden poo statue before that, but it didn't work.

I found this game to be nowhere near as fun as the first. After playing for hours I still hadn't made much progress and only came close to the third zone once through sheer luck of the creep layout. The air smash would've been a nice addition if it weren't so weak, and the not having to time the ground smash is nice but it seems pretty weak as well.

I love this game. I play out on my RAZR Maxx and it's great. Starts alike slow but now I'm hitting an average of 900k distance and about 1100 speed. Max was just under 1.1 mil and around 1450 speed.

Don't listen to the haters. It's a good a game for about 20 minutes a pop daily

Here are nice tips not featured on this site:

- The maximum Blacksmith level is 25.
- The maximum value for any one skill bonus in an equipment is +10 (you can have an amulet with three +10 bonuses, each to a different skill, at best). For weapon power I don't know, but I have made a weapon with over 300 power at Blacksmith level 25 and with a gold bar. With bronze bars I get around 250.
- The maximum bonus obtained through equipment is +15. So having two items giving +9 Creep Magnet is a bit of a waste, as that sums up to +18 and the three extra points (from 15) do not help. If you add up 5 points from leveling up and 5 points from a character's innate bonus, you have 25 at best.
- This tip is a sort of a cheat. You spin the Wheel of Steel to get a free metal bar, and normally can only spin again at midnight of that day. However if you set the date of your mobile/PC to one day in advance, you can spin again (you might need to load a different screen, then go back to the main map for the wheel to appear). Then just set the date to the correct day and you can spin once again. Repeat this for as long as you like.