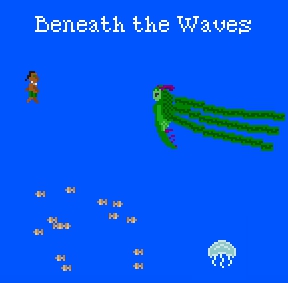 Gregory Weir tells a story of the worst breakup in history with Beneath the Waves, a short platforming adventure. The Sun and the Ocean have fallen out, and you've been sent to gather the Idols hidden beneath the waves and return them to a series of pedestals high in the mountains. Use the [arrow] keys to move around and [X] or the up [arrow] to jump. All of the Idols are hidden underwater, but luckily for you, you never run out of breath, so you can take your time and explore. To pick up an Idol, just move over it; you'll start carrying it, and a beam of light will appear pointing you towards its pedestal. The catch is that the sea denizens, who will normally ignore you as you swim in their midst, become hostile whenever you're carrying an Idol; the only creature that will actively pursue you is the shark, but all underwater life will damage you, and if you take three hits (represented onscreen by a trio of suns when you take damage) then you'll drop the Idol and have to recover it. You can't actually be killed, however, making navigating hostile territory undersea less harrowing than trying to carry a heavy package through a crowd of clumsy, ignorant people. (Alternate Title: "Shopping Mall at Christmastime")

What Gregory Weir does perhaps better than anyone is to continually present unique twists and intriguing concepts that make you want to find out more about them. Beneath the Waves, unfortunately, needs more; more variation (both environmental and gameplay), more polish, and more resolution. Not only can the prolonged platforming/avoidance sequences quickly become frustrating, they also feel like they're doing little else than padding the game since there's never any real variation to them or the locations they take place in. (It might have helped if swimming didn't feel like controlling a dolphin stuck in a set of rubber bands.) Even just changing the look of the areas would have done wonders. After playing for five minutes, I realised I'd seen basically everything the game had to offer in a visual sense, and trekking up the same featureless mountains and down the same featureless watery caverns meant it was difficult to find a lot of motivation to keep playing when I knew once I grabbed another idol my reward was just going to be a line of dialogue and to get to do it all over again, but longer.

That's not to say you shouldn't play Beneath the Waves. While you'll probably notice some similarities in concept to other titles (once you've finished playing, read the Notes accessible from the main menu for more details), it's worth playing for the dreamlike, surreal atmosphere it creates and the appealingly mythic-sounding narrative. The game probably won't run you more than twenty minutes or so, and there's only one ending, but fans of Gregory Weir's work who appreciate his unusual approach to storytelling will enjoy the time they spend with it.

Play Beneath the Waves

I'm really enjoying this one, but I can't find any rhyme or reason why I can wall jump off some walls but not others.

I was really enjoying this until I got to the last idol. The first 7 challenges are easy enough that the poor control while swimming isn't a major inconvenience. But on the last level,

the kraken starts following me, attacking at every opportunity and stealing the idol when I drop it.

At that point I was really just fighting the controls, and the frustration-to-fun ratio got too high.

I have the first idol, but I can't figure out how to get up to its pedestal. I can't seem to jump far enough or high enough. What am I doing wrong?

Aha, I got it. There was a very small area I needed to jump onto, which wasn't clear to me from the graphics.

I don't have any complaints with the controllers. It's a little repetitive, but then it's such a short game! Overall it was intersting and captivating. Such a simple story with such a simple storytelling.. it's a surprise how well it works.

Yeah. My advice on last idol - some sort of button-mash; just the instant when you get the idol start swimming as fast as possible in general direction where you supposed to, and don't think about finesse...
Also,

when/if the kraken takes the idol from you - keep swimming into him and he will drop it the same way as you do.

So in any case, be quick!

Afther the game, on the menu there is an option to "replay from the last idol". Does it imply there is more then one ending?

For some reason, I just don't feel that this story is all to deep like how Weir generally writes his stories. I guess me lacking someone to love, never mind being broken up, would be cause for that.

In a way, the story kind of makes me think about couples whom have undergone divorce, and they fight over who gets what. Even though they don't really want to fight, they have to fight, for no better reason than they must.

Maybe someone else can help shed some light with their ideas. Perhaps it is myself who is seeing this too shallowly.

So it's a metaphor for homosexuality

Are there multiple endings? It feels like the option to replay the final idol means there should be more than ending. Also it was rather abrupt.

Dear gods, "dolphin in rubberbands" is a very fitting description of the controls. I had to give up just trying to get the second idol - the wildly flailing controls that make precision-swims near impossible, the graphics that blend together and make it almost impossible to tell background from foreground...

It is a very strange contradiction to what Weir usually presents us to, sadly.

in the page of the author of the game, he says the game has only one ending.

I think the reason it gives you the option to replay the last idol is simply that that's the last save point after you've finished the game.

The 'replay final idol' button is misleading. If you click the 'notes' option, Gregory Weir specifically references that there aren't any alternate endings. So don't waste time trying to find them :P

My brother who is a fan of Gregory Weir games found out why the first idol is called "Majestic", maybe it's a reference.

Another game by Gregory Weir involving sea creatures: "I Fell in love with the Majesty of Colours"

I chuckled at the Cthulu reference. But is the game meant to be so speedy, it felt and played like my character was a missile rather then a man.

I'll be honest, I didn't find the controls as bad as some of you are describing them. Sure, I had more than one experience accidentally hurtling off a cliff or a ledge, but other than that, it was mostly maneuverable.

The Kraken did steal my idol several times, but it's very easy to make it drop the idol again, and then of course once I had it, I could blast away like the little rocketship that I really am.

Perhaps we moved too quickly underwater, which made turning difficult?

The lack of atmosphere jarred me more so than the controls - the land, entirely made of blocks, seemed harsh and unfinished, and the tasks of retrieving each idol became more and more tedious. The last couple of steps before the final idol were a bit unexpected, and I thought it would escalate into something better, but even this one was extremely easy to overcome.

Considering this is a story about the sun and the ocean, I had hoped there would be more of the sun as a character, and I'm slightly disappointed that there wasn't. I feel like there could have been more, and much better, and am left feeling a little disappointed knowing Weir's previous works.

And while I was never fully threatened by the Sharks or the Kraken in the way that Weir's joke title "Oh S*** Sharks" would imply, I found that the controls, imprecise as they were, added to the sense of danger.

I was glad that the open spaces were as expansive as they were, and that the caverns were not as restricting as they could have been.

It's a definite departure from his other games, and interesting to play - not that the mechanics were particularly different from any other existing game, but the dynamics were interesting to explore.

One thing I found with the swimming speed, the precarious feel of the above-water platforms and the sheer size of the world was that I didn't feel compelled to explore every single corner of the world, as long as I was finding my idols and getting them to where they needed to go. For a compulsive explorer, that feeling that I didn't need to go everywhere and see everything was an interesting change.

how in the world is the third idol placed? I'm jumping all over the place!

I just had random spurts of lag, but that might have been just a function of my computer.

Any tips on how to get the 4th Idol? I think I trapped myself.

Never mind. Finally figured out what to do.

the Kraken. I had zero issues on my first attempt. I figured he/she/it was going to chase me, so I just snatched it and swam like hell... admittedly a lot of it was probably luck in that I narrowly avoided a bunch of obstacles and picked up a ridiculous amount of speed so that even when I DID drop the Idol at one point due to an overabundance of sharks, I was able to grab it and get out of the water easily. Kraken never even caught up with me.

My experience was exactly the same as Dora's.

No trouble with the kraken at all, just some shark issues :P

With searching for the idols, i found i was less compelled each time. Finally i was just doing it to see the ending, which i found abrupt and disappointing. love weir's other games though.

The game was laggy and would freeze so I kept on veering all over the place, when I jumped to the left I flew across the platforms and off the edge to the point where I spent over an hour climbing one series of platforms, and when I jumped to the right sometimes the right key wouldn't work. I don't know if this is because I'm in Google Chrome, which you should have tested for and warned about unless this game is so old that you forgot it existed by the time Chrome became popular, or because you just did not try at all. This is the most painful and frustrating game I have ever played.