I played Beglitched a few months ago, so my excitement about it isn't as high as it was then, but I do know that I enjoyed it. What may turn people off about it initially is that looks like another match-3 game, but like Gridland, the Match-3 mechanic is paired with a strategy element that makes it engaging, in addition to the visual aesthetic and art and dialogue.

The game starts off explaining its rules in a somewhat obscure way, which some people may not like, but I liked having to work a bit more to understand how the stuff worked. There's not too much stuff to understand, so that didn't take too long. The premise of the plot is that you find the computer of the infamous cybercriminal, Glitch Witch, and you need to take care of her business. The main hub is the computer desktop, but then when clicking to individual icons you go to little worlds where you have to traverse overworlds to find battles. 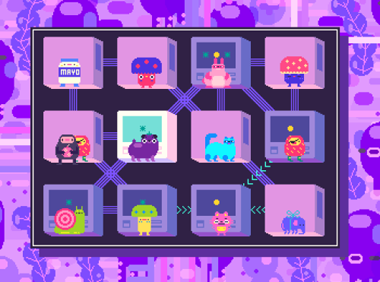 The battles involve the Match-3 aspect as said before, and there is an enemy lurking on each Match-3 board that you have to take down. There are 5 basic elements on the board, bombs, dollars, compass, a pink thingy, and batteries to charge your energy. You use energy to use the special features of some of the cells on the board. Matching 3 of the same kind of thing has different effects depending on what you match. The different effects make for an interesting problem of balancing resources.

If the game just rode on that principle in a shallow way, I wouldn't have wanted to recommend it. It was satisfying because it built on interesting consequences of the basic ruleset, adding cool things with each world that changed some element of how you would have to approach battles and moving around the overworld area. In one case, you have cat pictures that appear on your board that you must protect or you will lose, and in another case, you have to use a weird triangle to create super-bombs to destroy previously invincible enemies.

The art and general feel of the game are very nice. There was one small element of the game that I liked that didn't come up until later, which gave the game more of a personal feel, which i felt added to the overall experience.

Thank you it's fixed.