Watch out! Earth is being invaded by...green bunnies? And flying pumpkins? And bees? Okay, actually the last one sounds a little threatening. Luckily the world's biggest baddest smart aleck bear is here to protect us in the arcade shooter Bear in Super Action Adventure by Entertainment Forge. Your gun will shoot automatically as you control the bear with your mouse. The green bar at the top of the screen represents your health, and you can click to activate your super shot when the yellow bar a is full. Collect coins as you go to spend on a variety of upgrades, and maybe if you can make it to the end alive, you'll get to the bottom of why Earth is being invaded in the first place. 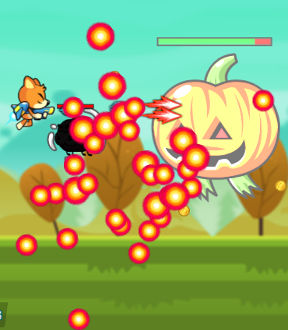 The money collection is generous, giving you plenty to spend between levels on things such as higher damage, and faster shooting. Don't underestimate the importance of evasive maneuvers. Upping your speed and running circles around your enemies or even evading them momentarily at the bottom of the screen are totally valid strategies. You don't have to kill all the enemies (though you'll get more coins if you do), you just have to make it to the end of the level alive. The enemies have different abilities. Some shoot vaguely toward you, while others have homing bullets. Some just take up the screen with their massiveness. The self-aware comedic narrative between some levels had me smiling, and the sheer number of bullets coming out of your gun as you upgrade is somehow in and of itself satisfying. Bear in Super Action Adventure is a solid little shooter that will have you dodging bullets like a pro in no time.

Is there some special trick to killing 'General Toaster'? I'm fully upgraded and manage to pump two super shots into it, in addition to, y'know, all my other bullets, but it just doesn't die.

I'm not sure, I didn't get that one either.

To kill the toaster I had max normal shot damage, max Super Shot, and a rank in the beam shot super. The two stack, and between them push the toaster back far enough to get a third shot off if you open with one as soon as it gets on screen.