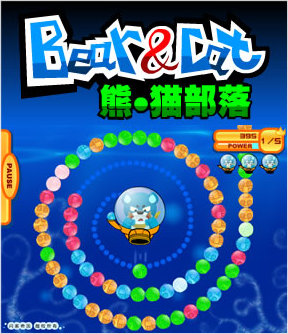 This pretty Flash puzzle game is oddly titled Bear & Cat, and yet it is really just a clone of PopCap Games' popular game of Zuma from a couple of years ago—which itself was a clone of Mitchell's Puzz Loop game from 1998.

The player shoots colored balls onto the play field containing a spiral of balls inching closer to the center. The object of the game is to create groups of 3 or more of the same color, which are then eliminated from play. Clear all the balls before the train reaches the bear to move on to the next level. Power-ups and combos add a little spice to the mix.

The graphics in this version are very nicely done, and the soundtrack is mesmerizing. And yet this version is but a cheap imitation of Puzz Loop's excellent class-defining spin on the classic game of Bust-a-Move from 1994. Still, Bear & Cat is a pretty game that is good Flash fun for what it's worth. Click.

The Flashempire site must get beaucoup traffic, because it took forever for pages to load—that, and maybe because China is half-way around the world from me. I would have preferred to link to the original game, and may in the future if the link above is moved or otherwise disabled.

Thanks go out to Nowak for setting me straight on the likely origin of this class of ball-popping puzzle game.

This game is really great, and very addictive. Thx Jay :)

But isn't Zuma itself a cheap immitation of Puzz Loop?

Thanks, Nowak. I was unaware of Puzz Loop before you pointed it out to me. I have updated the entry to include this fact. Much appreciated. =)

Very good game, Can't finish last level, too many things on screen slows this machine down too much, makes it unplayable. gonna have to finish when I get home, but great game.

Huge potential, but cannot recommend this game due to faulty programming of the last levels in each "round". Two streams of balls come out and the response gets very sluggish, regardless of quality setting. As a result, these final levels are largely unwinnable, since the streams do not "retreat" properly after successive triads are completed and eliminated. Instead, the lines simply stop until the new balls catch up, continually advancing the line towards you until it eventually reaches the Bear in the submarine. Unwinnable.