Ah, money. Scrooge McDuck has it, Jed Clampet has it, and now you can join their ranks in Be Richest!, the third installment in the Be Rich series. Divo Games continues to let you feel like you are one of the tycoons of the world in this casual sim management game. The city has been left in ruins as an evil thief of an official has taken off with all the city funds, leaving rioting citizens and run down buildings in his wake. It's up to you to use your finely tuned building skills to bring the town back to its former glory. 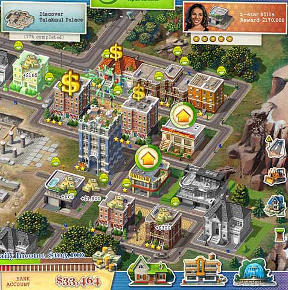 As in the previous games, you go through the map neighborhood by neighborhood, meeting different goals in each scenario. Use the menus on the bottom of the screen to choose what you'd like to build, then click to place it on the map. You can click multiple times on any building that is being constructed to speed up the construction process. Hovering over your selection tells you how much income and how many people each building provides. As you play along, your selection of housing and commercial buildings increases. You can also bulldoze buildings or junk laying around in open lots, as well as sell your houses using the various icons on the right of the screen. You earn money and reputation points after each level, which eventually let you purchase super upgrades that give you various gameplay bonuses.

Unlike in the Build-a-Lot games, you have to keep an eye on your population. The people living in each area have certain commercial demands (grocery stores, entertainment, etc.) and you must make sure you provide the buildings they need in order to keep them happy. If the needs aren't met in a timely manner, houses may be abandoned, costing you time and money to fix them back up. Some level goals involve getting a certain population number as well. The appearance rating is also important. If the number gets too low, you may be dealing with rat infestations!

While Divo hasn't reinvented the wheel here, there is still plenty to enjoy. Being able to help projects along as well as clicking to scare away intruders (such as thieves, rats, or paparazzi) adds an additional franticness to each level. The only downside to that is in my ferocious clicking, I often ended up unintentionally causing an upgrade to a nearby building. Each section of the map has a small storyline running through it to keep things interesting, such as building a movie studio, or researching ancient ruins. The lack of a level timer can be frustrating if you are trying to get a gold score on each level, but you can replay each level as many times as you'd like. It is very cool that the world map reflects what you have actually built in each neighborhood, and after you win a level you are able to continue playing to make it as aesthetically pleasing as you'd like. You know you want to be the next Richie Rich, (Richest Rich?) so get building!

But what are they going to title the fourth installment?