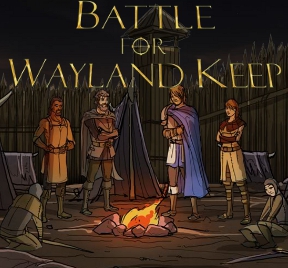 Who are you, and what are you doing here? You're probably familiar with the Mysterious Hero trope by now if you're even a passing fan of fantasy RPGs, but fortunately for the more bloodthirsty hack-and-slashers, the answer to both questions turns out being "kickin' arse and takin' names". In Jazza Studio's action-packed game Battle for Wayland Keep, you are Argus, an unusually talented swordsman who finds himself stuck in the middle of a bloody battle in front of the titular Keep. Forced to defend himself, when it turns out he can cut through foes like a hot bolt of magical lightning through soft, squishy marauders, Argus winds up being enlisted in the cause of defending the Keep. Naturally, this involves making people burst like ripe fruits full of giblets at every opportunity. Huzzah!

The game is played top-down, and most of your time is spent waging bloody battle against the forces that come to attack the Keep itself. Click on the ground to move, or on people to interact, and use the [WASD] or [arrow] keys to scan the camera around the area (moving the mouse to the edge of the screen works for this, too.). The goal is twofold; stay alive, and hold the gate. If you die, or if the Keep is breached, then it's game over. As such, whenever enemies are around, you're going to want to do your best to turn them into a fine paste. Argus will automatically react to enemies attacking him, but you'll need to manually activate any special abilities, whether by hitting the corresponding numerical hotkey or clicking on the appropriate icon. Most of Argus' abilities have a short cool down time (apparently screaming like a banshee while you tear apart entire battalions like overcooked spaghetti is tiring), but certain abilities can only be used once per day, so think twice before you use them.

Between battles, you'll retire to what remains of the Keep, where you can spend the resource points you've earned on reinforcements for the Keep itself, or on upgrades if you'd prefer to do your baddie slice-and-dice with greater, messier efficiency. Of course, when you're all ready for the following day, you should spend some time conversing with the other people stuck holding the line along with you. Who knows? You might just learn a thing or two. Analysis: Battle for Wayland Keep gives off serious Icewind Dale and Temple of Elemental Evil style vibes, primarily due to the way combat is handled and presented. For me, at least, this is a good thing; the nostalgic vibe is nice, but what's nicer is the combat-centric gameplay bolstered by the medieval fantasy tale that wraps around it unobtrusively. The writing is actually pretty good; the game doesn't dump exposition in your lap, but paints the world through character actions or turns of phrase that give you a better idea of what the world is like and what sort of people you're with. Not the stuff fantasy dynasties are built on, certainly, but a far cry from HELLO HERO PLZ STAB THE DRAGON KTHNXBAI.

The downside, unfortunately, is that the mouse/keyboard control combo fails to feel immediately natural and instead takes some getting used to. As a result, combat feels messy, and not just because of the gore you'll be slipping around on; as enemies clutter the screen, it's frustrating to feel like you're fumbling around and scrabbling to keep up, frantically reducing one group of enemies to a fine red mist while dozens of others hack away at the gates. It feels more than a little chaotic, and while that's probably what an actual blade-to-blade battle would be like, it does make for some potentially disorienting (and annoying) moments early on.

Of course, once you do get the hang of things, Battle for Wayland Keep really begins to shine. There's something immensely satisfying about absolutely destroying a dozen or more enemies in a single blast of light, and while it does wind up feeling a little repetitive, the short scope and the conversations you can have with your fellow soldiers adds to the story and helps to keep it from feeling like an unpleasant grind. (Sadly, no immediate option for "Get off your butt and HELP ME.") The presentation is great, if a little dim, and everything from the music to the voice acting really helps make the whole thing feel polished. Battle for Wayland Keep is, basically, a teaser prelude of sorts to Jazza's upcoming fantasy RPG Ortus, set 100 years in the game's future. While you have a while to wait for Ortus, Battle for Weyland Keep should more than serve to keep you good and bloody busy for a bit in the meantime.

This game seems interesting, but I was bitten by several bugs (vanilla FF 3.6.16).

1. The progress bar thingy on the "Preparing Graphics" never progressed beyond the "P" after 30 minutes of waiting. I eventually clicked through to the menue.

2. The enemies took a really, really long time to show up (if at all). I was not able to progress past the first level (the keep) because I could not find anything or anybody. I explored the whole courtyard from keep to burned huts, to gate to no avail.

It looks like a great game (who doesn't enjoy a little hack-n-slash now an then?), but it is horribly marred by its wretched execution.

The enemies were quite buggy; they briefly appeared in the bottom right corner then *stopped*. Those near the edge of the screen simply marched right back off the screen and I never saw them again. This made it impossible to complete the first week.

The limited eight directions of movement made for some glitchy pathfinding for Argus - not good when you are trying to race across the screen to stop some breakers from bashing the gates.

If you don't die from the hoards of enemies attacking the keep, you'll probably die from sort of venereal disease from sleeping with Elvina.

Let's see...
Non-intuitive controls
Buggy gameplay
Dodgy load times
Extreme levels of blood and gore (I'm all for hacking up the enemy, but do we really need to have severed limbs stacked like cordwood? Really?)
Glitchy directionals

Tell me again why I want to play this?

Nicely varied and god-like powers for destroying hordes of enemies.
Hack-and-slash with little downtime in camp or healing.
You can enter commands while paused, so you can make sure your character does what you want him to.
Decent controls.
No bugs that I could see.
Fast load times (as long as you don't clear your cache.
Extreme levels of blood and gore.
Oh yeah, and decent enough writing.

Tell me again why anyone would not want to play this game?

How about the sexism inherent in having the only well-developed female character be the town prostitute, who you are given the choice of sleeping with, over and over again?

I let the "Preparing Graphics" bar run full (did not take too long), but after clicking play, I got stuck at the loading screen (where it's a scene of a gate at night with stars in the background and the 'loading' icon in the bottom right). Can't get past this screen.

I love this game. Sure, it's gory and a little sexist, but a) it's a fighting game and b) the lead's a man.

Couldn't find any bugs, but my advice in general would be to upgrade your wall in the early levels - you will need your resource points for repairing the wall and upgrading your own personal defences.

The sargeant was a character as well developed as any other, besides the protagonist, and was portrayed as a soldier at least as capable as any other. It is beyond me why people search for sexism and racism in everything and read it into situations where it is not.

The sergeant is a female and is as well developed as any other character except the protagonist. She is portrayed to be a soldier as capable as any other. It is a mystery to me why people constantly look for sexism/racism in everything and read it into situations where it is not.

The game is well-made.

Classic hack-and-slash with a topping of tactic (or timing at least).

For people who haven't played the game, give it a go and I assure your satisfaction.

For people who ran into bugs, try reloading the game or try it on another browser.

For people who are still battling through the game, do not be shy to use the "pause" button, it's more of a tactical feature than a cheat tool.