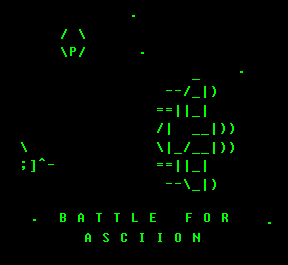 It's usually the blocky pixels of the arcade and the NES that usually comes to mind when thinking of retro gaming. However, one should never count out the American Standard Code for Information Interchange. Yep, we're talking about ASCII, and anyone who cut their teeth on an IBM PC Compatible knows that it's not just for NetHack. Battle For Asciion, an arcade space shooter by Relevo Video Games, is a tribute to those beautiful worlds of text, and a satisfying sci-fi yarn to boot. Waiting around on the title screen will reveal the hilariously convoluted storyline: how General Zoltrax has gone rouge, joining forces with Technodroid empire who holds the Asciion system, the universe's one source of omnifuel, hostage, and how Ace Pilot Chris Sans must fly his starfighter through the Gamma Inversion cannon defenses to launch a strike to the core, and so forth. Really though, the most important thing to remember is that shooting stuff will make stuff go boom.

From the flicking semi-colon engine flares, to the optional scan lines, to the bleeps and bloops of its awesome (and downloadable!) soundtrack, Battle For Asciion was designed with a lot of love. Obviously the aesthetic is the most unique thing about it, but the hardcore gameplay is solid as well. Battle For Asciion does have an unfortunate flaw in its lack of an autofire option. There's no way that any keyboard ever hooked up to a CGA monitor would be ever able to stand the kind of mashing this game will require. That aside, Battle For Asciion is a fun shoot-em-up wrapped in a wonderfully nostalgic presentation. It's sure to leave you...

Holy (CENSORED), getting all that text formatted properly must have been a programming nightmare.