Battalion Commander is an entirely awesome vertical shooter by IriySoft. First of all, it has tiny soldiers, awww. Second, those soldiers are seriously deadly (and deadly serious). Also, there are helicopters, tanks, grenades, napalm, and your fashion-conscious enemies are wearing pink uniforms: what's not to like? Your goal is not so much to finish the level, as to complete missions. Each level gets more and more difficult, until you're getting shot from all sides like a loser in a water balloon fight, but that's all right, as long as you keep getting experience points and money. 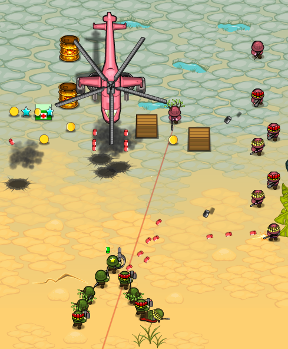 There are a hundred missions in total, which ensures hours of butt-kicking gameplay. Every time you start a level, you have three of them to finish, and they range from killing a number of enemies with a knife to destroying helicopters with napalm waves. Experience points go towards your next rank, and each rank unlocks three upgrades, which cost money to activate. The upgrades are well implemented, and varied enough to influence every aspect of the game; they give your little soldiers the much needed upper hand as they progress through the ever harder levels. Mechanics are smooth, your squad moves in elegant unison, and bullets hit their targets with admirable ease. The visuals are (don't say "cute"!) colourful, bright and clear, which is a good choice when your screen is often crowded with enemy objects. Even if, in the beginning, you die well before the end of a level, Battalion Commander never seems frustrating. For a relatively simple shooter, it's surprisingly addictive, not least because it makes you think the good old "just one more mission and I'll stop, I promise."

Good game, just...kind of easy. The first 500 meters gets boring

Until you get the car upgrade

Still, there are lots of periods of rest between "waves" of enemies that got kind of boring. I beat the game after only getting 18 challenges too.
Great game! Just...the pacing's a little off. Definitely worth playing through though! Nice way to waste an hour!

Something a little off balance here, like 20 or so achievements and mission accomplished. Then just on and on the same.

Nice idea, great graphics, great shooting, smooth game play - but for me just lacks making me want to go on and get the other 75% of achievements... so, from me, no rating because I would not rate down on such promise but it lacks the finish to give it a 4 or 5.

how do you stab enemies?

just go near the enemies. When you're close enough, your commander will automatically pull out his knife and kill them.

Agree with yaddab to an extent. It does get repetitive . The new objectives are just get/kill more of (insert thing)

I agree with a couple of the other commenters. Enjoyable game initially, but I was starting to get bored way before I attained the highest rank and bought all of the upgrades. Also, I think that unlockable difficulty modes would have been a more effective way to add replay value than having an "endless" mode. FYI if you want to play a similar game to this one, but with more depth and RPG-ish elements; I would recommend trying "Band of Heroes" - also by Iriysoft and available on JIG.

I'm with everyone else that it is pretty repetitive... I'd like to see a way that you can drop a team member...
I'd also like to see a list of the missions... I've gotten stuck now because I have the upgrade which allows you to start the mission with a rifleman, grenadier, and marksman... The 3 missions in my queue are "1000m with single leader at once" "Gather max team of rifleman only" and "Team up with 30 grenadiers"... While those are great and all, I need a way to eject team members... I've tried to kill them off, but there are just too many medical kits, and too many upgrades which make the missions nigh on impossible...
I've completed 74/100 missions, so I've done a lot... I feel that some will be just plain impossible given the parameters that you 1)have to use to beat the game & 2)have to do away with to beat the missions...