From indie developers Supergiant Games send you to another world in Bastion, a rich, atmospheric action RPG adventure. You take on the role of "the Kid", a white-haired lad who wakes up one morning to discover the rest of the world has literally collapsed away, but finds paths rise up beneath his feet as he travels through a hostile realm to find... well, that would be spoiling things. Discovery plays a big part in your journey as you visit the ruins of a once-great civilization struck down by a Calamity, your only companion a narrator who speaks to you as you travel, gradually filling in the gaps in your knowledge as you discover what must be done. 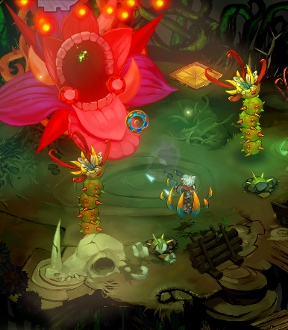 If you're expecting a more traditional RPG with towns and party members and anything less than an action-packed romp through a series of surreal realms, Bastion might not be the game for you. Most of Bastion's gameplay revolves around effectively mastering the combat, since the world is a lot more unfriendly than it used to be. Enemies constantly harass you as you travel, and defeating them earns you blue shards you can spend to upgrade your weapons or buy other items at the Lost and Found.

The game offers three control schemes; mouse, keyboard, and gamepad, and you can configure the keys under the options menu. The action takes place in real time, with an isometric viewing angle. You'll explore various locations that have survived the Calamity (... somewhat...), fending off hostile creatures and gathering certain items you'll need to ensure the rebuilding of the world.

The Kid is able to carry two weapons at any time: a melee and a ranged, and there are multiple varieties of each to discovered scattered throughout the realm, ranging from swords to pistols to muskets to a magical flame-belching bellows and more. As you progress, you'll be able to build different structures that will allow you to do everything from adjust your equipment, to equip potions that grant passive bonuses, to unlock special challenges by appealing to the deities, and so on. You'll also find challenge areas that can grant you special items and upgrade materials if you feel particularly confident with your weapon of choice. The game has two different endings, hinging on the last decision you make, and completing the game once allows you to unlock New Game Plus, which lets you keep all your equipment and experience among other things the next time you start a new game. 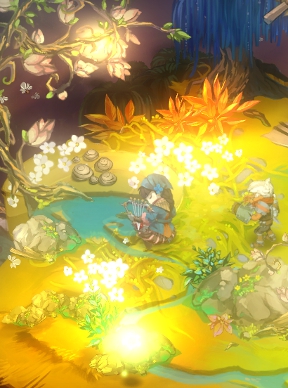 Analysis: If there ever was a game world that made you feel like you wanted to fall on your back in the grass beneath the sun and watch the clouds roll by for hours, Bastion is it. From the amazingly rich, rolling acoustic guitar soundtrack by Darren Korb to the lush colours and striking artwork, Bastion is beautiful from every angle. The narration is one of those things that sounded novel and interesting when it was announced, but also like something that would get old or even annoying as time went by. Happily, the Narrator never becomes unwelcome, but more importantly actually feels integral to the experience rather than a gimmick. As you explore, he comments on your actions and surroundings in a way that not only slowly fills you in on the history of the world, never repeating himself, but also infuses a remarkable amount of personality and character in everything from the environment to monsters to inanimate objects.

The hack-and-slash top-down gameplay brings to mind old classics like The Legend of Zelda or Secret of Evermore, with objectives that mainly consist of "go here", "kill that dude", "take that thinger" and "stop falling off, stupid". Enemies rarely feel like they're smart enough to pose much of a challenge, and seem to rely on simply hitting harder or swarming while you can use the landscape to your advantage. It feels like the game needs a few more big, flashy, different boss battles to break things up a bit. As it is, however, the game still manages to keep from feeling repetitive by creating mesmerizing and alien environments and areas that all feel different and exciting despite the near-identical objectives. The story and narration drives you on, compelling you to want to discover what's around every corner, and you'll never find yourself at a loss as to where to go next.

Bastion is one of those rare experiences you never really feel like you get enough time with. The endings might be a little unsatisfying given how abrupt they feel, but the adventure as a whole is not to be missed. It manages to tell a captivating story in an extremely engaging way that makes you feel as if the events are happening around you and being driven by you Most players will probably spend around six to eight hours on a playthrough, more if they chase down every optional weapon challenge. But the bottom line is... is Bastion worth it? Yes. Absolutely yes. Fans of more traditional RPGs will want to try the demo first, but try the demo they should. It's a gorgeous experience from beginning to end that hits more than it misses, and provides more heart and soul than most other games in the genre out there.

This game is great.
Since the path gets built as you move, even walking is exciting.
Great story
Great narration
Good weapons
Cool shop system
Cool challenge levels
Cool sleek and smooth feel all throughout.
Very challenging for thrill seekers.
Beautiful graphics

Agreed with jxs - it's a fantastic, unique and engrossing game that does almost everything right. One of those games you recall fondly for years after you are finished with them.

I only played for 30 minutes, but god, this game's pretty good. I'm really looking forward to get new weapons and spirits, and that's something important in a videogame. The atmosphere perfectly fits for that kind of game. <3

By far one of the best games I've ever played, so much so that for the first time I just have to leave a comment. Really looking forward to more from Supergiant

WOW! This is THE BEST game I've played since Portal 2! I highly recommend this game to everyone. EVERYONE!

Why are you still here? Go get the demo and try it out.

You're still here. Get going! :D

This game is much more fun than it looks on screenshots.

This is pretty cool so far. I've been watching a friend play and the one thing I'm dying to know is, is it possible to get the song Zia was singing right before you found her as an mp3? I love it and I wish I could have heard it more.

Hi Mmx! The song Zia sings (along with the rest of the fabulous music) is available to purchase from the official site:
http://supergiantgames.bandcamp.com/

I bought the soundtrack myself and I think it's absolutely stunning. Darren Korb and crew are obscenely talented. (My favourite is actually Zulf's theme, "Mother I'm Here")

something to note is that you are not limited to having one melee and one ranged weapon. You can take both ranged weapons or both melee (I'd advise against the latter one, though).

Scrap musket and Army Carbine. Time to bring out the big guns and get this over with.

Thanks Dora. I'll definitely check it out. :)

new game + and all gods, that is where the real challenge is XD . My fav weapons are the samurai sword and mortar cannon (forgot the names).

this game is beautiful. and they've recently released it on the mac app store! C: