Well, it seems that some nice sequels are coming out at the end of this year. So if you remember finding yourself waking up in a bedroom, after a long fall; If you remember answering a strange phone call in that strange bedroom, from some unknown, but already pretty annoying person/thingy; If you remember making your way through lots of crates, doors and strange contraptions. And most importantly, if you remember what a "BackDoor" is, then your almost 3 years long wait is over!
(If not, please go here first, as no sequel should be played before its prequel)

So you decided to leave "your" house behind, and get deeper "into the rabbit hole". It won't take much time for you to understand that where you are heading is a rather unstable place, but you shall not worry, as soon you'll find yourself back on your feet. Now, remember that strange and annoying guy on the phone? Apparently, he has a job for you. It's not such a hard one, just to find a guy and follow him. What can possibly go wrong?

First of all, I must tell you that I waited a while for this game to come. It felt wrong to me that a game as good as SolarVagrant's BackDoor Door 1 will have no sequel, so when I saw that this game was out, I was very happy that it was finally released.

This game's writing feels like a pretty natural continuation of the previous episode. The game is much bigger than the previous one, and the plot got bigger accordingly. But still your phone is annoying and gives you orders, and you need to find your way out of the mess you got yourself into. The biggest change in this game is that there are other characters apart from you and your "remote" companion, and each and single one of them have something to say. The result is great; it enriches the world around you, and makes the story more, well, lively. The humor is also very strong in this game, and many of the object descriptions and the NPCs' reactions can make one chuckle. The puzzles this game features follow the main ideas of the puzzles in the first episode. The puzzles mostly consist of finding certain items, combining some of them and finding where to use anything and how to use it. Some puzzles require some creativity here though, and maybe even some trial and error. 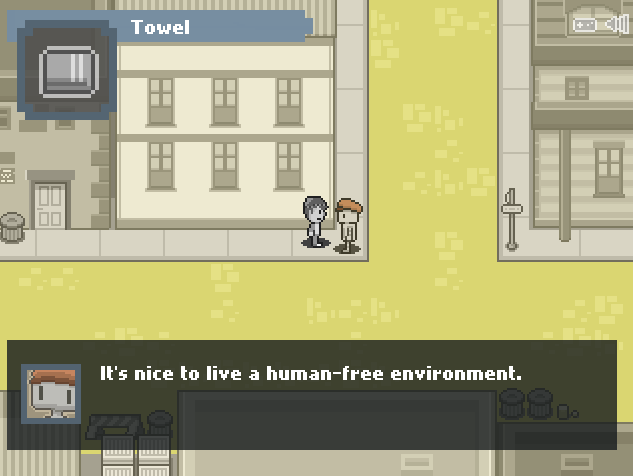 The game's interface went through a rather big renovation. The controls are still the same, but they can be configured from the options in the main menu. Another added feature is the ability to adjust and mute the sound of the game. [z] is used to examine an object in front of you, [x] can be used to use the object you are holding, possibly also with whatever there is in front of you (so let's say, if you have a box cutter, and a box in front of you, pressing [x] will open the box), and [c] can be used to cycle the object you're holding. Pressing [space] will open a menu, where you can see all the stuff you have, switch the object you're holding, combine objects together, save and exit the game (who exits a flash game anyway?). The volume can be adjusted with [+/-] and muted with [0]. Another nice added feature is that the controls can be viewed when mousing over the controller icon at the top-right corner of the screen, which is convenient.

The game's graphics and sound pretty much follow the previous episode. The theme color seems to be greenish yellow instead of blue, but nevertheless pretty much the same. You'll probably notice that there are still plenty of boxes around (so good you have a handy box cutter with you). The cutscenes are great. They blend well in the game, help to create the game's atmosphere, and usually are quite entertaining. The soundtrack is, well, pretty much like the one in the previous episode. It blends well in the game, and creates the right atmosphere at each point.

All in all, it is great sequel for a great game, and the end looks very promising. See you next door!

I'm stuck, very close to the end! I can't figure out how to

stop Cork from coming up the conveyor belt to get Aert and me. I have a bucket of water, but the game doesn't want me to use it on the control panel or the robots. The wire, box cutter, towel, and pencil don't seem to be much help either.

in the factory, with a crowbar, belt with hook, wheels

No idea what to do next.

You should have some power over the conveyor belt itself...

The direction, in particular...

Change the direction of the conveyor belt when Cork is on it, thereby launching him into the machine.

Have you used the "belt with hook"? There is a grating on the floor somewhere in the left sections of the factory.

you discover you're on the moon

, so I went to the first and found that I was probably right.

Also, could staff go to the Creeper World 3 game and either fix or delete my comment. It contains incorrectly formatted spoiler tags, and I can't figure out how to either edit or delete.

That was great! I can't wait for the next door...or at least I hope I don't have to wait three years.

The developer, SolarVagrant, has a good walkthrough on their Tumblr page. Google and you shall find.
Their blog mentions Easter Eggs in both games, but I don't have any details, so keep your eyes open.

Since I didn't see a comment about easter eggs on the review for the first game, I'm just going to describe easter eggs for both games here.

The easter eggs are

usable items that people give to you, and unlock bonus locations in the game.

obtained in the last room (with the minimalist background and eerie music, remember to save first!) by walking through a wall upward and talking to a sleeping developer (presumably SolarVagrant).

the fridge which previously had a "GET EGGS" note on it. This gets you to Green Robo's quarters where there's a jukebox and cake.

obtained from the guy at the bar with the red shirt and robot disguise. After you have completed the events of the storyline, backtrack into the factory, go through the leftmost door and get a bucket of water, then bring it to him to drink.

the chicken statue in the park. This gets you through a street named "EGG" and a room with televsion sets, into the library which has a jukebox and cake, and a human stranger warming himself by a fire.

use the water bucket on various robots, the telephones, and the fire.