Sweeping square environments are all the rage these days. It's no wonder that that eventually, someone would have to start hiring park rangers to keep track of all that breathtaking blocky wilderness. Luckily for us, said rangers just so happen to be awesome. Awesome Ranger, by Vladimir Nayata, is the platform-y story of one brave little keeper of the cubical wilds, who must save the local population of adorably kitty-like fairies from poachers. Like all good platform heroes, the Awesome Ranger can move and jump with the [arrow] keys. But the Ranger can only move left or right, and sometimes the imperiled fairies are trapped in, horror of horrors, the background! Good thing the entire world literally revolves around the Ranger! Press [Z] or [X], and Awesome Ranger's environment spins around them, giving you a new perspective (and a new dimension) on things. Flip between dimensions and points of view, rescue the fairies, and get safely back to your spaceship so you can both blast off! Previous games such as Fez have tackled the concept of moving two-dimensionally through a flippable 3D world, but it is, dare we say, awesome to see the idea move into the realm of free browser titles. 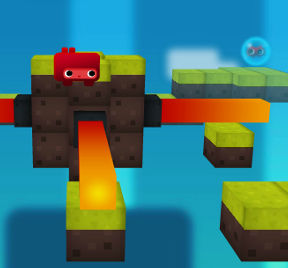 Awesome Ranger's visuals are highly impressive for something rendered in Flash, instead of a natively-3D platform like Unity. It's quite exciting to start off a level on a simple, left-to-right platform, but look into the background to see a small mountain flanked on all sides by dangerous lasers! However, the 3D movement when swapping between planes is imperfect, and can sometimes get awkward. If your ranger is right on the edge of a block when you change your camera angle, it's possible you'll walk into a wall you'd think you could walk past, and you'll have to flip back to adjust yourself. And since the camera swings through the full 3D environment every time it moves, in areas where you need to swap back and forth quickly, it does have the potential to make the sensitive motion-sick. But aside from a few minor wall-bonking issues, the 3D aspect is otherwise well-implemented. It even works when you flip while jumping! The level designs start off easy, but some of the later levels require surprisingly tricky jumps, precise flips, and even a few small puzzle-solving skills. Some of the more puzzley ones can be made unwinnable, and there's no quick-reset button other than to fling yourself into a pit, but those are few and far between. The only real consistent level-related gripe is that having to take the fairies back to your spaceship in every level feels a little like padding, and not enough levels give you different things to do on the way back. Otherwise, Awesome Ranger provides both challenge and a charming browser-based implementation of a proven, and delightful, concept. If that's not awesome, what is?

Yeah. those views are annoying as hell.

Cute. But: do not play this when you have a migraine. Just sayin'.

I just record one video gameplay for Awesome Ranger and link to here :)

this is my video :
https://www.youtube.com/watch?v=9VfBRJvTBWM