Awesome Happy Heroes, the new simulation game from Little Giant World, enjoys a refreshingly simple philosophy: heroically saving the day equals making people happy. When marauding villains threaten various scenic vistas in their fair town, the Awesome Happy Heroes decide it's pummeling time and emerge from their subterranean base underneath the local park to quell the menace. The citizenry are happy, and the citizenry then pay the Heroes so they're happy too, but the bad guys? Not so much. So presumably these heroes are out to save the day for everyone but the villains. Whatever you may think of the notion of improving your town by having themed costumed gang fights in public in broad daylight, and whatever history's great philosophers may have to say about using happiness as a substitute for righteousness, Awesome Happy Heroes is a superhero training and combat simulator with plenty of ZOOF!, KERPOW! and SPLAT! for anyone who's ever read comic books and thought, 'What if?' Or for those of you who've actually gone through with it professionally and could use some advice on designing your underground secret hideout. 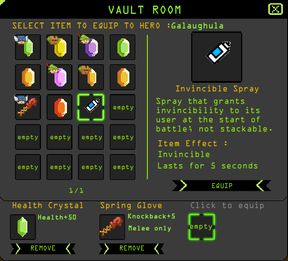 Your days consist of assigning your costumed mercenaries heroes to various training rooms each designed to improve an ability. Where you send heroes to enhance their attributes, like hit points, speed, attack strength or special abilities, will depend on what strategy you've decided to use. It typically takes a day for a hero to complete his or her training, but it will take one more day for each hero sharing the training room. You also have the option to send heroes not being trained out on dungeon crawl expeditions, and they'll come back with equipable buffing items. Every day or so an alert will sound, and you have the option to choose up to three heroes in your team who aren't busy training to go stop the villains. You can also choose to 'selectively hear' the alert and not oppose the villains, which will enable you to keep training at the cost of a minor loss of reputation by the beseiged citizenry. Somehow you'll lose even more reputation if you go to stop the villains and flub the attempt, but as far as we could determine your rep can't sink any lower than zero whatever happens. Which come to think of it is probably just as well. ["I'm here to save you, fair citizens!" "Oh. Great. It's that guy again."] The fight sequences are completely automated, with your moves and successes all dependent upon stats. If you succeed your fellow citizens reward you with both cash and reputation, and the cash can be used to upgrade your stronghold for better training. With Fast Forward options including 5x and 10x, game days and months schoom by in a blur about as fast as you can send heroes to the training rooms and feign complete ignorance to all the klaxons and flashing lights alerting you that your city is in distress, all to enable you to pass the next battle and advance the comic book-like storyline. If you've ever wanted to play a comic book superhero, now's your chance!

What is the benefit of Tech?

I was just about to ask the same question: what does tech do? Why are the special skills not activating?

Hi guys! Tech is the generic term for a character's special abilities. The greater their Tech points, the greater the likelihood that their abilities will activate.

I found that increasing Tech increases ability of special attack (which they can be seen performing in the Tech room.)

Sorry, I meant to say "frequency of special attack." You want it to be high enough that they are performing the attack almost constantly in battle.

I find that this game, like all of their other games is best played zoomed in at 150%.

This game is a painful, painful grind that completely depends on you training your characters until they're OPed. You'll want the Rambo character's tech to be high so he can push back the one-hit teletubbies near the end.

Yes painful is a good word for it.

One important thing that I only figured out at level 52, thereby making everything way more grind-y than it needed to be:

You can re-fight cleared missions. As in, instead of losing reputation by refusing the mission, or worse, trying and failing the newest mission, just re-fight the previous mission.

Gripes (other than the grind)

Regarding the gems; what does "stackable" mean, and if that does refer to something that I can do with them, how do I do it?

I believe "stackable" just means the effects are additive. So it's not worth it to equip a hero with two Creeptonites, because they're not stackable - having two won't make the hero resurrect twice. Nano health gems, on the other hand, *are* stackable, so if a hero is equipped with three of them, he will gain 15% health every two seconds, instead of just the 5% one gem would give him.