Do you know Avernum? You should. Spiderweb Software's towering isometric indie RPG series is sort of the vast, undersea giant of computer gaming that destroys smaller titles in the wake of its passage. It focuses on the vast underground world originally used as little more than a dumping ground for society's criminals, but eventually evolving over the course of the series to something more. Avernum: The Complete Saga contains all seven of the original Avernum games to deliver hours and hours and hours of classically designed, lovingly detailed RPG entertainment. And corrosive slime. And flesh-eating fleabag unicorns. And constant, constant betrayal. Just like... nonstop betrayal. Luckily for you, it's the fun kind! So clear your schedule, because you've got a prison to escape. Or maybe a rebellion to lead. An expedition into the unexplored? Avernum has all that and much, much more, so call in sick and clear your schedule, because you have a legacy to forge.

In each game, you'll create a party of adventurers that best fits your play style. Create a squad of lizard hedge wizards, or berserker cat warriors, or go the balanced route and make a group of heroes that cover all your bases and take advantages of the unique traits you can use to make sure you're ready for any situation. It's presented in top-down, turn-based style, where each step you take (or move you make during battle) causes the world to move and advance a bit around you. Most of the game can be controlled with the mouse, clicking to interact or select, though to make things easier you'll want to make use of the numerous hot-keys for everything from your spells to searching the area around you. (Don't worry, each game features a helpful integrated tutorial.) During battle, you'll manually direct your characters around the battlefield to engage enemies and cast spells, with the game pausing after each person takes their turn.

Though each game gives you its own epic quest to undertake, it doesn't do a lot of leading you around by the nose. The maps you can explore are huge, and as they say, fortune favours the bold. Secret treasure and areas are everywhere, as well as secrets of the more substantial kind that can open up new quests for you. Don't worry, though the plots of all the games tie into one another, you don't necessarily have to play them in order. (Though if I had to pick a favourite, I'd probably go with the third.) Each one features significantly different overall goals in addition to a world that actually feels like it reacts to your deeds. Be brave, explore, and, uh. Save often. You never know when a herd of angry unicorns is going to show up to eat your face. 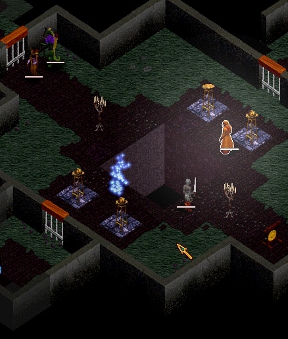 Analysis: The cheapest complaint to take against the series is that it doesn't so much evolve or change significantly with each installment as it does simply improve in a myriad of small but noticeable ways. There's no denying that Avernum 6 is better than the first installment in almost every technical sense, particularly where the user interface is concerned, but you won't find much different as far as the setting or even the gameplay goes. Is this a bad thing? Well, not really, since Avernum is focused on doing one thing very well, and that's provided a deep and involving "old school" RPG experience. There's no denying the graphics are on the simple side, though if I had any real issue with it it's that I might personally wish Phil Foglio's fantastic illustrations had remained for the whole series and been featured more in the game itself.

Additionally, they are, if you would permit me the indulgence of a technical term, freakin' stupid huge. Each game has the sort of staggeringly long playtime stuffed with sidequests and secrets that puts bigger budget titles to shame, and even more surprising is that they rarely ever feel like they're rehashing material even late into the series. The lengthy plots and subplots are very well written, though exceptionally wordy at times, so fans of more action-oriented RPGs might find this one too slow. Instead, Avernum will be appeal to players who like story-rich games that offer tactical combat. Victory typically comes down less to grinding and more in careful preparation and being able to strategically move and act with your party around a variety of hazards and locations to boot.

If you love deep, involving plots and challenging gameplay, you owe it to yourself to check out the Avernum games. Being able to buy them all in one package at such a low price is sort of shocking, but more impressive is seeing how far they've come. The amount of polish and hard work that has gone into not only crafting each adventure but refining the entire series is enough to make you feel really inadequate, and you can feel the love that's gone into developing them. With its creative, sprawling stories and enormous adventures, the Avernum games are some of the crown jewels of indie RPGs and should not be missed by anyone who loves a good story.

Wow, $7.99?! I've happily paid loads more money for these games over the years. And I've dumped months of time into them.

I don't even know what to say. I've never actually beat an Avernum game, but they've always been with me growing up...this is exciting news for me. This should be a great excuse for me to play through them all. =)