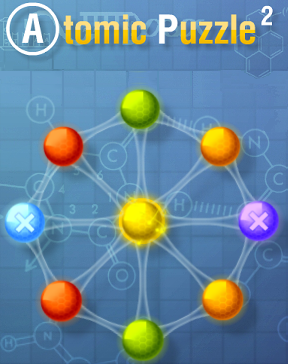 Sigma Studios' chilled-out chain-reaction puzzle game is back with a new installment, Atomic Puzzle 2! Like the first installment, the goal of the game is to clear each level of all molecules. Clicking a molecule with the mouse will cause it, and the surrounding matching molecules, to disappear, as long as you keep several rules in mind. 1. The color of the molecule you click doesn't matter in the slightest. 2. The clicked molecule must connect to at least two molecules of the same color. 3. Only one molecule in each combination is allowed to be unpaired. The unpaired molecules will remain on the board. It's more complicated to explain than to play. That said, once the "special molecules" get introduced (Bombs that will destroy all molecules, Colorless Molecules that can only be destroyed by bombs, Splitters that will divide into two molecules of the color shown, Reactors that will change the color of connecter molecules, Switchers that will swap the color of two connected molecules, Wild Cards that can act as any color, and Redirectors that will change how molecules are connected), don't be surprised if you start to have a little mental meltdown.

Similar to its predecessor, Atomic Puzzle 2 is bright, colorful, soothing, and could use a little more documentation. The challenge level starts off fairly low, meaning that it's not until you're about a quarter of the way into the game that strategy starts being as important as the pretty explosions. Then, once all the various special atoms are introduced, things get sneaky tough. Still, even while tackling the hardest puzzles, there is an overriding sense of calm... a science-y zen that is sure to soothe the most jagged of nerves. Light the incense, pull up a picture of Feynmann for inspiration, and enjoy the molecular meditation at the core of Atomic Puzzle 2.

Er, Tricky? I don't know how to tell you this, but I think you've got molecules confused with atoms.

This game looked like it could have been fun. The premise was simple: click on colors based on neighboring colors. Unfortunately, after I played a few levels, it just turned into a "which-order-should-I-click-the-colors-to-clear-the-level-in-the-fewest-clicks" game, but that's probably too long to be a tag, so "Guess the order" would probably be more appropriate. It just got too frustrating too soon; a similar game would be to just have playing cards face down and turn them over in one particular order, restarting every time you got one wrong.
Maybe this just isn't my type of puzzle, but I must say I did not enjoy it (although I really wanted to.)