I could complain that Andy Brown's puzzle game Assembots undoes all the important psychological work of that episode of Star Trek: The Next Generation where Data was put on trial and we all learned a valuable lesson about humanity, but at the end of each level, the robots do a cute little dance where you live, and it turns out I'm just that shallow. The goal in each stage is to get the required number of factory made robots where you need them to be, and they require a lot of hand (metal appendage?) holding to make it happen, since on their own they'll just trundle forward until they hit an obstacle and then turn around and do it again. At the bottom of the screen you'll see a bank of commands that will affect a bot's behaviour. They can dig through blocks, climb walls, and more, but each command only has a limited amount available, so you need to think carefully about what bot you use them on, and when. Click a command's icon, then click the bot you want to apply it to onscreen. Some commands will last until you apply another, while others are only temporary, such as digging only lasting for a single obstacle. In the bottom left corner, you'll find buttons to speed things up or slow them down, as well as the button to restart the level without getting stuck. You might not need to use all the bots available to you to meet your goal, so try to finish the level using as little resources as possible, as fast as you can! 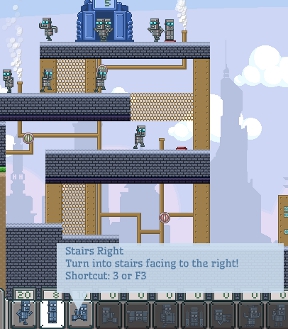 Assembots is, despite its annoyingly repetitive (though mercifully mute-able) soundtrack, one of those puzzle games that manages to be cute and peppy from every aspect while also providing just enough difficulty at just the right speed. The speed up/slow down buttons keep the pressure from skyrocketing when dealing with multiple bots, and the multiple commands make for a nice chunk of options to fiddle with in order to come up with the most efficient solution to every level. Having to figure out the duration of some commands seems a little strange, since for example the climb command is permanent while the dig command is not, though it's not something that'll confuse you for very long. Each level feels well thought out, introducing new elements and requiring you to work with specific and limited resources that require you to use proper timing and a little thought. Though it lacks a level editor and the use of victory-screen-only numbers for scoring can make it harder to figure out how to improve, Assembots is a fun and smart addition to the logic puzzle/programming game genre that also features little robots dancing happily. So, five mushrooms, basically.

Why does the happy dance add so much joy for me?

Just because it has robots in it doesn't make it a programming game. I would call this a puzzle platformer.

Seems like you're supposed to let the first one float and do something to help the others. But what?

The first robot drops and then stands and become a platform for the others to drop and not die.

Serious lag issues for me. Makes the game unplayable. Wish there were Quality options. Strangely enough, when I right-click and bring up the Flash menus, the lag goes away....too bad it doesn't stay away.