Yikes! Goblins are amassing an army and attacking Asgard! The war has begun, but we have teleporters that can zap our troops right to the front lines for just a smattering of gold. Too bad the enemies have the Yetis on their side, and every other evil creature under the sun. But with plenty of upgrades and the strongest of gods on our side, surely the kingdom is in good hands. Asgard Attack, by AnnieandMark, is an action defense game where you need to deploy units to save the day. You can choose to summon in warriors, archers, mages, and healers, and direct them where to go with a simple click of a button to stop the fiends from following the path to your kingdom, marked by blue flags. You can select individual units or click and drag a box to gather them all up and send them all over the map. Each unit is upgraded individually, as is their armor, weapons, and special abilities. When all three are maxed out after four upgrades apiece, you can then choose what powerful god to change them into, unlocking more spells and powerups. Create buildings in town to get even more upgrades using stars earned by finishing levels in different modes. 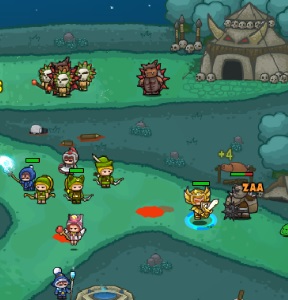 I'll admit, Asgard Attack seems to borrow a lot from Kingdom Rush. The inspiration is obvious, but with a different take on how you control your units, as well as an upgrade system, it makes itself stand out. Your units are useful in ways not typically found in games of this genre, like healers actually being able to attack instead of just waiting to be slaughtered when there is no one left to heal. Some have special quests, like freeing all caged prisoners, or keeping your engineers alive to finish building a totem that will release a powerful enemy you'll then need to destroy to win. Every round is a new test and requires new strategy to solve. There are also three modes to play... normal mode, rush mode where you must survive an abnormally huge wave of enemies, and a mode where you have specific units that don't respawn as normal. There is even a building that will generate stars, so if you're really hurting for upgrades you can just practice a little patience and farm them all in. Asgard Attack has a few flaws, like the hot key system really not making things easier to navigate, but it does bring a great twist to the genre with plenty of hours to play.

There's a glitch on the levels where you can't buy:

If you sell a unit and don't change focus, you can buy units

I really like a lot of the mechanics and it's a fun little game, but I wince every time I see the loading screen with the bikinis. I've become desensitized to games with high-quality graphics showing almost naked female characters, but it makes me freshly sad to see it in the pixelated style of this type of game.

To reset the homeland, allowing you to re-distribute stars, click on the construction worker to the lower left of the "Play" castle.

for free stars - build the Magic Mine and upgrade that to give you more stars per hour...then change your system clock and collect them as you go. Changing the clock back will result in the display going negative, but the stars you distributed to various buildings will be intact.

Level 12 Heroic, trying to do this one without losing 1 life for the achievement. I have all upgrades maxed and even with selling 40 stars to get extra money I am not finding this possible.