The king is dead. Dibs on his crown! Ascent of Kings is a platform adventure game by Nostatic Software that sends you on an epic quest to become the next king. Your brothers are out to do the same, but because nobody thinks you've got the guts to do it, you have something to prove! The road from your home to the Shrine of Kings is a twisted and treacherous path, but there are a few handy items you'll encounter along the way that help you traverse the land. 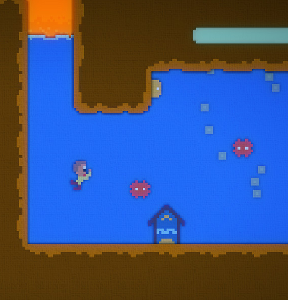 On-screen controls allow you to move around the world, climb vines, jump, swim, and interact with objects. As you hop through the hilly landscape, you'll bump into a few enemies you'll have to outwit along with plenty of obstacles, most of which can be overcome by using one of the game's hidden items. Can't reach the button to open the door? Maybe a slingshot would help! Vines to slippery? Gloves, young lad, gloves!

As with most touch screen platform games, the chief drawback to Ascent of Kings are the controls. Virtual d-pads just aren't a perfect replacement for physical buttons. Fortunately this isn't a game of absolute precision, so it doesn't kill the experience by any means. And if you die, you only lose a few seconds of progress, so frustration is cut down to an absolute minimum.

Even without physical buttons, Ascent of Kings is an enjoyable adventure that feels like a simplified, cheerier version of Knytt Stories. There's a big world to explore with plenty of minor shrines to find, items to uncover, and fun bonuses to stumble across!

Warning to iPhone users: up-down-left-right controls are very tiny and spaced closely together, making precision moves (like when underwater or climbing vines) near impossible.

This is the first time I have ever rage quit a game!

(Note: I am the game developer) Yes, the iPhone controls are too small for some people. I have submitted an update for the game that increases the touch control size on high-density devices. It usually takes about a week for an update to go live.

Awesome -- that you responded and that there is a solution on the way! Thanks :-)