Have you ever thought to yourself, "I could really use some practice to hone my building, budgeting, and obliterating UFO skills. Now how can I do that all at once?"? Well we have the answer for you! Artillerize by Pyxelbit is a platform shooting game where you not only have to keep yourself alive, but build the floor beneath the feet and keep the roof over your head. While movement and purchasing ammo is done with the keyboard, Artillerize gives you two choices for attack. It's automatically set up for the [spacebar] and [arrow] keys to aim, but the mouse may be the easier choice. You can run back and forth between different guns as needed, and you'll want to keep moving to stay ahead of your foes. 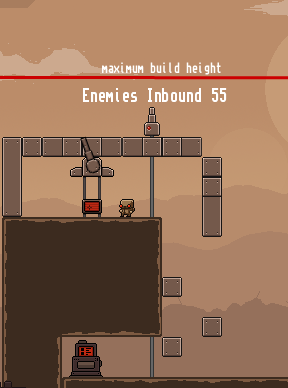 In each stage, aliens will attack, trying to destroy you and your base. You need to man mounted turrets to shoot them down, after which they drop coins you can spend on valuable resources between waves. You only have sixty seconds before more aliens show up, so you'll need to quickly drag building blocks from the top of the screen to where you want them to go, trying to make the safest structure, but each block costs money so choose carefully. The choice between ammo and safety is hard, since there's never enough coin for enough of both. The game does have a bug that pops up randomly, sometimes causing a block you placed to stay yellow. Don't be fooled... it's not actually there, so you have to rebuild it. It happens rarely, but if you're not watching for it, you can find yourself falling through to your untimely death.

One of the reasons this game is so hard is the many ways you can lose. Your base can be blown to the point where you can no longer reach the gun terminals. Your shop can be destroyed leaving you with no way to replenish ammo. You can fall off the edge or trap yourself from collecting any more money. Plus, you're nowhere near immortal when it comes to the falling bombs. It soon becomes a game of strategies more than just a simple point and shoot. It would be great to see an upgrade or a sequel that had an option to spend money on stronger ammo or tougher blocks, but for now Artillerize is a great strategy crafting game that overcomes some of its more frustrating aspects with its entertaining and innovative gameplay. This game will please both creative seeking and action loving gamers alike.

hope I can remove blocks and there are triangle blocks to buy...

It was a decent and simple game, so fleshing out with achievements, upgrades, and the ilk would've been cool!

I agree! Having choices on what to spend your money on beyond defense or offense would have brought whole other level to the gameplay.

The inability to remove blocks was over looked as it would have been so helpful!

Hopefully some adjusts will be made if a second one ever comes out.