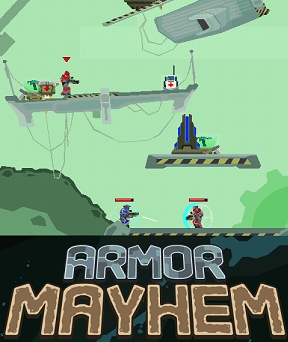 In the futuristic world of Armor Mayhem, Loussi's new action shooter, the world has run out of energy. Thus, major corporations send teams of faceless space marines to discover a new source. And, of course, once they find a planet filled to the brink with Unobtanium, they land and immediately start blasting each other in the face with lasers. It's not really all that surprising, considering that if you sent some faceless space marines out to get a loaf of bread at the grocery store, it's even money that there's going to be a rocket launcher fight in the dairy aisle. However, what Armor Mayhem lacks in plot depth, it more than makes up for with enough frenetic action to make Master Chief jealous.

Using the [WASD] keys, you direct your marines around various landscapes, clicking with the mouse to fire upon your competition. Various jump points and teleporters will quickly transport you around the level. In addition to your standard gun, other weapons are available around the levels, waiting to be picked up with the [S] key, and switched with your standard weapon with the [Q] key. Hitting enemies fills your bullet-time "adrenaline" meter, which can be activated by holding the [spacebar]. Each level has one of the several typical space-mariney objectives: Single Player and Team Deathmatch, Capture The Flag, er, I mean DataSphere, Territory Control, and the Oddball-like Overdrive. The [E] key can be used to give your teammates basic commands. Winning levels unlocks more maps and cash to be spent on new weapons and cosmetic upgrades. Now go faceless space marine... the emperor commands it.

Analysis: Armor Mayhem is an inspired combination of Halo and Chaos Faction. I very much like both of those, so, really, I was on board right from the start. The levels are well-designed, the game-modes offer a nice amount of variety, and the difficulty is challenging without being too brutal: every level feels like a battle that is hard-fought, but ultimately won. Also of note is the art style, which I really dug: it's filled with jutting angles and solid colors which is a nice change from the attempts at ultra-realism often found in the Space Marine sub-genre. It manages to be imposing without being gritty and simplified without being cartoonish. 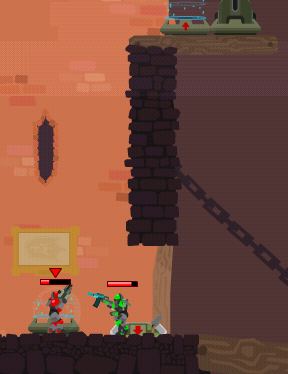 There are a few things that are less inspirational, first of which being the campaign mission mode. It's not unexpected to have to play through it in order to unlock all the levels for custom battles, but it's kind of a pain, especially when the plot is so threadbare. Next, the weapon-pickups, while varied, are tiny enough to be hard to tell apart during play. This can be a problem since some are much more useful than others. I appreciate the ability to give my AI teammates commands, but in practice, it fell flat for me: they were often much more effective when I just let them do their own thing, rather than trying to look out for them. Finally, be forewarned that the game is quite processor intensive, to an extent that it locked up my browser a couple of times during play.

Even with the above caveats, there's much to love about Armor Mayhem. Shooter fans of all kinds will appreciate the engine's depth, and the platform elements extend its appeal beyond the genre. One can only hope that an online multiplayer variation is forthcoming. As much fun as the game is to play against the AI, this is an experience that would be great to share.

Update: A level editor has been added for the making and sharing of battlefields of your own devising!

Thanks, Tricky, for the tips!

Hm. this is weird.

I've been having troubles getting games hosted on JAY servers to run, at all. cant get this one to run, can't get...a couple of the others to run... wound up having to find one of the other games on newgrounds just to play it.

This is getting weird.

[When mentioning issues like this, it would be very helpful to us to try to reproduce the issue you're seeing. To do that, we need to know what versions of OS, browser, and Flash Player you are using. That said, our game pages have been tested on both Windows and Mac using all the major browsers, so if you're having a problem, it's most likely due to either your Flash Player needing an update, or some browser extension you have installed that's conflicting with Swfobject, the program we use to embed Flash games on the page. -Jay]

I love this game. Found it a few weeks back. I have a soft spot for multiplayer sidescrolling shooters like this.

Ashiel, do you have some sort of AdBlocker or Firewall running? We've had issues in the past with ad blockers, and I know that personally, for me Malwarebytes, which I use, tends to be really overprotective and tries to block a lot of safe flash games and movies from loading.

Sorry Jay. *giggles*
I have malarawarabytes but it isn't an active program (i have free version.)
Win Xp home, Mozilla firefox 3.5.16. Whatver version of flash player is the most recent (dunno how to check).

I love this site, have been following it dilligently for years now. Just, since my last format, (a week ago or so) I've had problems with this site. The flash games 'show up'... but they never load... and like this one, all I get is a black box. ish weird.

I can play games... on all sorts of places. Kong. NewG, armor... they all run fine on those sites, its just the Jay server I'm having problems with. I'm sure I'll figure it out.

Isn't it kind of paradox that in the age of flash a game that is graphically comparable what we had on DOS in the 1990s brings down a CPU 1000 times as fast?

Ashiel: I would suggest updating your Firefox browser to the latest version (3.6.13). The version you're using is several months old, which could be causing the issues you're seeing.

Also, if you just reformatted your computer (and reinstalled Windows) be sure you have all the updates to the OS installed, too.

I hope that helps. You should not be seeing any issues with our game pages. We use industry standard methods for embedding the games on the page.

thanks for the help Jay. gonna try that now. Just hated the look of 3.6. Still hate it *giggles*

Love the site, love the people. LOVE YA ALL

This game would probably be a lot better if it had a multiplayer mode.

I loved this a lot more than expected. I only don't like how there is no real conclusion, especially with intriguing things like the living walls and all.
And multiplayer would be SO amazing!

I think it was Dolly Parton who said "It costs a lot of money to look this cheap" :-)

Love it. Played it on Armor Games a few weeks ago. I like the music (well, the two songs by NIGHTkilla, anyway), and the gameplay's nice. Sniping with the plasma cannon is quite fun, especially in slo-mo.

WELL, it's like Halo, except 2D, and with AIs who are stupider than pretty much any game I've ever played. The enemy AIs seem incapable of aiming well, even with the easiest guns like the laser gun, and aren't really able to move around. I know it's hard to code AI direction sensing, but these ones can't even pursue you. This makes it really easy on the CTF maps, where you can capture every few seconds without being attacked, unless, by chance, the enemy team's marines spawn all at once.

The Planet is a living thing. I REALLY didn't see that one coming. -.- Come on, at least spend 5 minutes thinking about the plot.

Besides these two flaws (which in the campaign mode were somewhat game-ruining), it's not bad. The levels have some thought put in to them, and would work well if the AIs knew how to effectively navigate them. The graphics are pretty good, though not the best for louissi.

When JIG does a review, I think it would be nice to include a link to the original site so I don't end up playing through the whole thing, only to find that to play user-created levels, I have to play it on Armor Games, forcing me to start over!

Thanks, Tricky, for the tips!

I do wish that this game had a mechanism similar to Chaos Frenzy 2 (or whatever it was called) where you could unlock all the weapons as you will, but you can also choose which weapons will spawn.

Nothing is more annoying that having bought a weapon to try it out only to realize that you can't undo unlocking it - and therefore have to endure the AI handing you your rear on a silver platter with it.

My son is needing help getting past the lava levels (level 16). Any help?