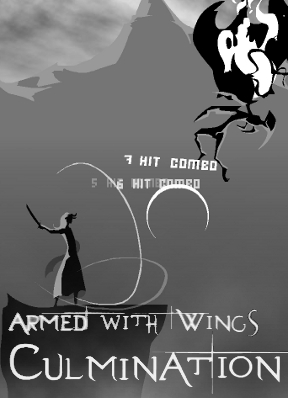 The time has finally come, Lone Warrior. Every other member of the rebel army is dead, but in Armed With Wings: Culmination, the tyrant Vandheer Lorde is finally within your grasp. Grab your katanas, folks, because Sun Studios have outdone themselves again with the last action platformer of the Armed with Wings series.

You start your adventure in the middle of a tense chase between the two bitter rivals. Pursue the elusive Vandheer Lorde by controlling your shadowy protagonist with the [arrow] keys. You can swing your sword with the [A] key, tapping three more times in succession for a chain attack. Continuous strikes build combo points and fill the bars to enable your special attacks, performed with the [S], [D], and [W] keys.

Gameplay is linear and fairly straight forward. Either attack or avoid your way through enemies and obstacles to reach the glowing goal at the end of each of the 15 levels. Unlike the first and third games of the series, there isn't much in the way of environmental puzzles other than some avoidance based platforming. So, if you're the type to look before you leap, you won't encounter much difficulty surviving these challenges. 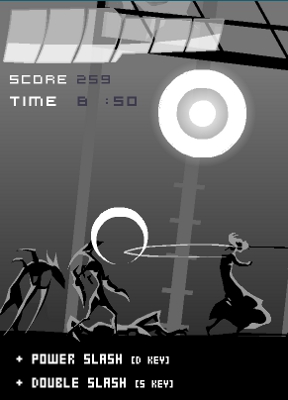 Analysis: Culmination really is the perfect word to summarize the experience in retrospect. The best elements of the earlier installments have been cherry picked while the tired, clunky, or unsavory aspects are nowhere to be found, resulting in a wholly unique playstyle. These changes create an uninterrupted, albeit more basic, game and shift the focus from puzzle-solving to platforming and seamlessly flowing combat. Abilities are designed to be performed in unison, which can be a bit tricky at first. Once you've mastered the rhythm, however, you'll stack combo after combo with ease. What has remained the same is the beautiful design. The visual style has stayed true to its familiar aesthetic, but with notable improvements. The monochromatic backgrounds are stunning and the characters in silhouette work perfectly with the fluid combat animations.

While Armed with Wings: Culmination could easily excel as a standalone game, it's all the more impressive as the finale to the evolution of a memorable series. There's something to be admired of a title that isn't afraid to constantly reinvent itself rather than re-release a one-note song. While it may not be as complex as its predecessors and there are some minor flaws, this game boasts intuitive, fluid action and beautiful visuals that come with its elegant simplicity. Even if you were previously a stranger to the Lone Warrior, play for just a few minutes and you'll find yourself easily sucked in to his story and compelled to exact his vengeance.

I didn't get that I was

VL at first for the bossfight.

I thought it was some cutscene (or "demo" if you're Japanese).

[Please remember to include spoiler tags in your comments, especially when discussing the ending! Thanks :) -Trinn]

I'll be honest, there is one major annoying thing about this series.

The fact that you finish one game, then the next is something completely different. In the end, you dont have a "proper" ending.
Otherwise, beautiful and fun series.

How do I stop the screen from scrolling? I can't jump because of this.

What? A game you have to RELOAD in order to change the options? What kind of stupid idea is this?

Anyway, for what I managed to figure out, they seem to have nicely ironed out the gameplay issues of the previous ones. Too bad this game makes my computer freeze AND CONTINUES PLAYING WITHOUT ME WHEN THIS HAPPENS.

I may try this game again when I have a better machine.

It is not necessary to reload the game in order to change the options. While in game, press "P" to access the Pause Menu.

While the game is paused, you will find a tab labeled "Settings" on the left side of the screen underneath your health bar where you can make any optional changes without any hassle :)

I have exactly two complaints, and they are both small.

1) IT WAS TOO SHORT! I want mooooooooore!

Final boss fight and I... AM the final boss? Wat? Vandheer Lorde is kind of slow and lumbering and his attacks don't comb that well. Could've given me some warning about being dropped into his shoes, at least.

Besides these two complaints, and they are minor, this game was AWESOME. Best part was the W attack... oh MAN, was that cool!

I applaud that they finally made a separate music and sound, but I would really have liked them NOT on the pause menu.
Anyway the game was fun, maybe short and the

[Again, please include spoiler tags in comments that discuss the ending of the game! Thanks :) -Trinn]

Sorry for the double post, but I can't stop thinking how everybody didn't put spoiler tags when referring to the same thing. Guess it felt like a backstab.

[I'm sorry you felt that way, however you are mistaken. Both users Wolfgang DelaSangre and Orange who commented before you included spoiler tags when discussing the exact same thing. It is important to many of our players to experience the game for themselves without having others give away the ending, which is why I asked you and Nato to use spoiler tags. It was not my intention to "stab" you, just to ask you to be courteous to your fellow commentors. -Trinn]

Sorry for yet a third post, no I meant being stabbed by the developer.

Any solutions to Mecha G's problem with the screen scrolling while playing? I have the same problem.

keeps you as the lone warrior

during the boss fight, but the ending is exactly the same.

This doesn't feel like the last in the series, more a prequel, or a remake of one of the earlier ones. Otherwise, the ending is incredibly weak.

for those of you out there who do not get when this happened in the series, Culmination happenes in the middle of Armed with Wings 3. It was the time current between the level where Leo defeats this flaming skull boss up to the end of the game.

the game is unbelievably addicting its simple but awesome the graphic,effects,compos
can anyone tell me what the song title played during the fights please ?

Does anyone know how to unlock the final level?

On level select I can get to level 14 but I have defeated VL as VL on normal mode.

I would like to know because it seems I can't unlock hard until I get through this.

Okay, so, I have a problem.

I cannot seem to get the Slaughter medal. I suspect it's only possible by beating the game on hard without dying, which is very nearly impossible in and of itself.

Rarely have I been that disappointed in a game. It is unbalanced and uninteresting. The final fight is a joke

where the so far weak hero doesn't even get scratched by sword attacks or falling to his death, until you get the second attack and win by keeping "s" pressed for a minute.

There is no story to speak of, the depth is a pale reflection of previous games. I wish I had not played it.

I liked the game a lot. However,

I found it very diificult defeat the boss on hard mode. Does anyone have any advice on this?

The fighting was very smooth and the combos were awesome. I loved the ultimate combo

Overall I think this is an excellent game. The combo system becomes even more enjoyable the more you practice using it.

is actually very well done in my opinion.

My main gripe is that on hard mode, the later levels

with hordes of flying enemies right at beginning are only manageable if you have some special saved up from the previous level. Woe betide you if you die, because then you have no special. You are swamped with so many enemies all at once that after just one basic combo, you will be kicked around like a ragdoll until you die. You can't jump to dodge because of the flying enemies.

Maybe there is some trick I am missing (like "don't die ever")?

I found that this game flowed excellently, apart from the boss fight at the end ._. I thought that it was a cut scene as well, but once I got used to it, it was very easy.

I loved spamming A with S then doing some awesome combo move with D.

Obviously, Hard Mode is harder (and I haven't beaten it yet because I suck at Hard Mode), but the ending is different. You play as the Lone Warrior instead of Vandheer Lorde, for those who thought the boss battle in Normal Mode was a dumb idea :p

it may seem that AWW-Culmination is stand alone game...but i think it connects to AWW3 as:

In Aww3, Lone warrior went to slay Vandheer Lorde leaving Leo alone. But as we know in last boss fight Vandheere comes back to fight Leo. In the end Leo claims to be blackmist and resurrect her mother and Lone warrior. Even the ending in culmination (Lorde killing Lone warrior) makes perfect sense if i consider this to be true

.
Please let me know what you think.

okay, for those who hated the flying guys. you can run right past them every time, as they take a while before breathing fire. Also, easy way to beat the final boss on hard is never let up. Keep him as close to the center as possible, and use long, quick combos to prevent him from teleporting out (teleporting out of combos is great when you are vandheer, though)

To beat the boss on Hard,

try charging VL, then jumping over/behind him. After that, you can follow up with your standard attack combo. Repeat.
Eventually you'll get enough special to hit him with Power Slash. It's pretty useful if you use the aerial version directly above him.

That's pretty much how I did it.