You knew it would happen, but were utterly powerless to prevent it. When a routine colonization mission goes awry and your ship bites down hard onto the vast frozen tundra of the wrong alien world, its supply of construction materials scattered broadly across the unfamiliar landscape, what remains of the crew have formed tiny village communities around whatever they've happened to salvage in their vicinity. It's up to you to establish contact with these tiny tribes and reunite the fragments of your advanced civilization as you gradually learn more about the unique and subtle menace at work in this strange new land — and your own personal influence on a force whose nature and destiny are warped around and bound inextricably to your own. An intricately-detailed game world meets classic SNES-era gameplay in srehpog's Zelda-like action-adventure, Ark 22. 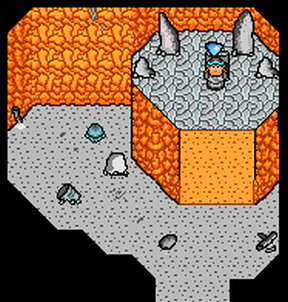 Handling is also pretty SNES-like, using the [arrow] keys, [z] [x] and [c] for most options, [enter] to confirm menu options and [spacebar] to slash. Coffee of various types is a consistent theme throughout the game, and it actually recovers your hit points. It's not only dispensed from machines, but — in a glorious example of "Nintendo logic" — also dropped by the mice that wander around the planet's surface and dungeon. Some mice will drop ammo cartridges as well. Space Advice: If you ever go to another planet and the mice are scurrying around drinking endless cups of coffee and packing ammo clips, you're almost certainly not at your intended destination. 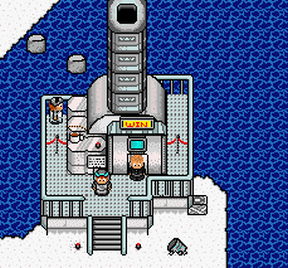 You'll trek through the world discovering more about the main plotline as you progress, but interspersed throughout are various mini-games, side-quests, and dungeons where both your deft reflexes and your puzzle-solving abilities will most certainly be taxed. In fact Ark 22 has been consistent in terms of player response as being a couple notches too difficult for most, and some of the boss monsters are tougher than you'd encounter in a conventional title. But it's been around for years now, accruing a loyal following of casual gamers. Ark 22 is a difficult game to put distinctly into one category. It plays like Zelda, but the logic puzzles in some of the dungeons are nothing to snooze through. There are mini-games, but the rewards of playing them are vital to the overall plot. Upgrading your equipment through NPC interaction also figures in, but it's not quite an upgrade game. Ark 22 is really its own unique indie cross-genre creation, with its own sense of challenge level, and whether you love it or you don't is going to be a very personal assessment as well. Either way, what everyone can agree on is that with years in the making Ark 22 features a thoroughly-developed game world and storyline, presented with a puckish, lighthearted sense of humour that makes it a pleasure to encounter.

Windows:
Get the free full version.

This looks like a lot of fun, but do you know if there's an option for full screen? The text is too small to read otherwise.

Unfortunately, I was unable to find a full-screen option.

That's probably due to the game being made ages ago, when that resolution took up much or all of the screen. =)

How do you use items from your inventory - coffee in particular? I could sure use a cup, but it seems I can only stare at it...

LuckyDee, I am wondering the same thing as well. How do you use the coffee???

I'm pretty sure I'm near the end, but there are a couple things I seem to have missed that are bothering me:

First, in the first dungeon, in a hallway filled with those plasma-ball trap things I can see another room on the left of the screen with stairs down, but I've run through the dungeon multiple times and can't find a way to reach it.

Second, I have 9 out of what I assume is a total of 10 crystals. I suspect the one I'm missing is down those stairs in the first dungeon, but I can't be sure. I failed to make note of where I got all of my crystals, but if anyone has an idea of what crystal I might be missing it'd be appreciated.

Third, information about this game is sparse, but in my searches I did find mentions of a "Samosaphone", and I know I did find a phone number in the cartographer's house (1-800-CHEAT-ME) which makes me wonder if there is indeed a Samosaphone in the game and if so where it is.

Information for this game is incredibly scarce; once I find everything, I'm tempted to go through it again and write up a complete walkthrough since there doesn't appear to be one anywhere on the internet.

get a flask that can hold, among other things, coffee from the high-pressure dispensers which can be used at will or can act as an extra life.

Well, I finished the game but

I got the 'bad' ending. Apparently I'm missing some upgrades, but I have no idea where they could be. I've already upgraded my rifle ammo to 100 and my mine bag to 20, and there doesn't seem to be any more upgrades for those. I have the rifle crystal and the boat machine gun, too, if those count. So I'm at a bit of a loss.

A few things that are still nagging at me, though:

Those stairs down that I can see but not reach in the first dungeon. Still can't see how to get to those.

The small building west of the HGA building in the north. It's never opened, and I don't know if it just never does or if it can and I'm missing something.

The chest on the cliff above the sign on the ground just northeast of New Samosa Village, past the explodable rocks. I can't see any way to get to it, via land or water.

The guy in the building southeast of the Northwest Village. You ask him something about mines and he seems like he's going to give you something but is turned off by your meager 20-slot mine bag. I thought maybe I could use the bank to amass 65,000 credits and buy the luxury silk bag the guy in the mine building offers after you buy the 20-slot bag from him, but even with 65k credits in my bank I don't get the option to buy it, and I can't withdraw more than the max 5000 credits at a time.

As for the stairs, I managed to access them. If memory serves they're

part of a shortcut out from a more advanced part of the dungeon, and the blocks are part of the system designed to keep traffic one-way. They're togglable on the route for which that nook was designed.

As for the small building, I recall encountering some posts about it on a thread. It's for

"a surprise" - meaning, for an optional plot event that neither of us triggered on our playthrough.

As for areas inaccessible via water and air,

while I haven't encountered a usable aircraft, those logos that appear occasionally on the landscape look to me like landing zone indicators.

I found what I was missing.

the Samosaphone. I'm not sure if it appeared at some point or if I just overlooked it all this time, but it's in the HGA building, on the table right in front of you when you enter. Its purpose is purely as a cheat menu; Srehpog posted all of the cheats here: http://gmc.yoyogames.com/index.php?showtopic=160692&page=47#entry2676919

I believe you're thinking of different stairs. The stairs I'm talking about can be seen in the hallway just before you come out on top of the stairs you're talking about - the hallway full of those rock things that shoot laser balls at you. On the left side of the screen is a small room containing stairs that go down a floor, and it appears that it can be accessed from it's left side via somewhere else in the dungeon.

As for those glyphs: they come in to play very near the end of the game, but they don't let you access anything new - specifically that chest on the cliff, so I'm still unsure of how or if you can reach it.

I'm not entirely unconvinced that some of these things aren't just oversights, remnants that once served a purpose but are now unused and weren't removed.

After getting the rifle, the next step is to

go to the room with the cannonballs flying in four directions and hit the two red targets on either side of the doorway. (From save point, go right then up.)

However I look at it I can't sum 10 Kytri crystals , I only count 9, which one am I missing?? These are the ones I have:

1. In the first dungeon, after you shoot the mills
2. In the first dungeon, after you blow up the rocks with a mine
3. West of the building in the north with the lottery machine and the game where you have to hit a ball
4. After you get 400 points or more at the ball hitting game
5. After you beat 200 points at the shooting gallery in NSV
6. After you beat the sharpshooting game on Hard in the Northwest village
7. In the cave on the lake
8. In the dark maze of the third dungeon
9. East of the building southeast of Northwest vilage

I have no idea where eslse to look for....