Arena Quest RPG is a demo of an upcoming action RPG hybrid by gfactoriser. It puts all the ingredients of an RPG into a big pot, then boils it until only the delicious concentrated broth remains. It's got combat, it's got characters, it's got experience points and equipment and skills. But it all takes place on an overworld map that lets you move from one battle arena to the next, cutting out everything except fighting and party management. 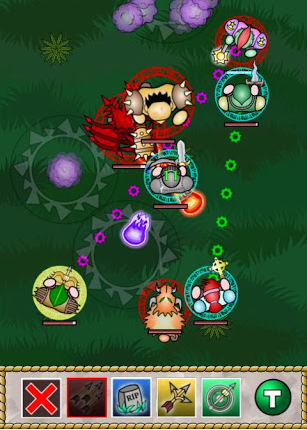 Arena Quest splits gameplay into two main sections: combat and exploration. Battles are the meat of the game and send you to a small field where waves of enemies attack you one after the other. Tap your party members to move them around the screen, then assign attacks and targets to start taking out foes. Your early team consists of a sword-bearing warrior, a healing cleric, and an archer. By positioning each one to utilize their main strengths you can dispatch enemies with relative ease. After battle you take the spoils and start managing equipment. Keep the best armor and weapons in use at all times, of course, but feel free to sell the excess to keep your inventory as lean as possible.

You'll find combat can quickly get overwhelming in Arena Quest, especially when the first dragon struts on the screen. Keep calm, keep your heroes mobile, and don't forget to use your party's creative tactical options to control where enemies attack. Sometimes playing dead is a great offensive strategy!

This version of Arena Quest RPG is just a demo; the full game has yet to be released. The download includes the first world, four hero characters, about a dozen levels, plenty of items and equipment to work with, and a boss battle. It's a great mini-taste of what the full game will offer, and we eagerly anticipate the full release!