Imagine if Mike Shadow: I Paid For It! was about a guy who accidentally destroyed the world with an ancient weapon and you basically have Denis Novikov and Yuriy Porogoy's Arcane Weapon, an action game about being hardcore and beating up the giant demons you unleashed. Your job is to take out the demon in each fight before it destroys you by clicking the icons at the bottom of the screen to chain together powerful attacks. Each one has a cool down timer, so try not to wind up standing around like a dingdong while you're getting your face beaten in. Landing blows sometimes causes your opponent to drop cash, important to buy new upgrades, equipment, and attacks, or helpful healing items, so make sure you weapon your cursor over them to snatch them up when you see 'em. Since you can only have so many ability slots on your attack bar, make sure you take the time to organise it between fights, dragging the icons of abilities you own to slots to swap them out. 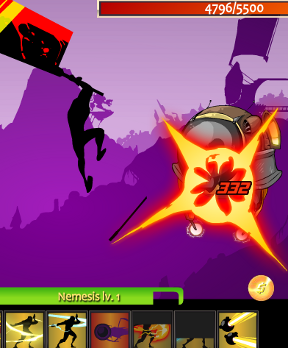 Make no mistake, Arcane Weapon is a gorgeous, addictive little game for all its relative simplicity. The enemies are wonderfully designed and the flashy attacks on both side are fun to watch. Since many attacks provided bonuses to the next move you make, there's a nice element to strategy rather than simply mindlessly punching keys and grinding away... though you'll have to do some of that too. At the same time, however, it doesn't feel like it's as smooth to play as it should be. Having to wait for an attack to finish before you can click on another is a little annoying, when it seems like queuing them up should be relatively simple, even allowing for your enemy to retaliate, and having to waggle your cursor around to pick up items is tedious. But with a gorgeous presentation, tons of upgrades and achievements, and a whole batch of demons to take down, fans of flash and fighting will appreciate Arcane Weapon's style and simplicity as the perfect breaktime beatdown.

607 Views
0 Comments
jayisgames.com— Gaming has gone through quite a radical change since the rather primitive days when Atari ruled the roost. We have gone from 8-bit graphics to VR and photorealistic ultra-HD such as MS Flight Simulator. But before the days of Steam...  ...

1,106 Views
0 Comments
chrpa— Jayisgames needs your help to continue providing quality content. Click for details Welcome to Weekday Puzzle! After several weeks we've got a separate Weekday Puzzle. First you need to help a small frog in cassovary's world which is being...  ...

1,940 Views
4 Comments
chrpa— Jayisgames needs your help to continue providing quality content. Click for details Hi! Weekday Escape is here! Two short Selfdefiant's are for the start, and then comes isotronic/Phix with an adrenaline escape from a burning hotel. There isn't any...  ...

2,997 Views
2 Comments
chrpa— Jayisgames needs your help to continue providing quality content. Click for details What a beautiful game we've got from Ichima Coffeedo! It is the complete renewal of five years old Room 17 and it's very well done indeed. Two weeks...  ...