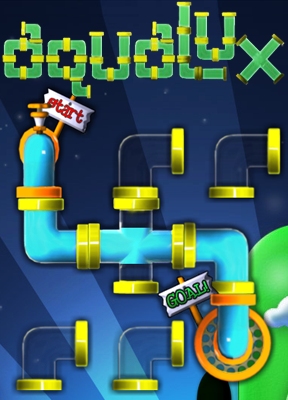 Hook up a few pipes and get that water flowing in this take on a very familiar, but equally popular puzzle genre. Aqualux is all about twisting and fitting pipes together, opening the tap and seeing all your work go the drain.If you played anything called Pipes, Plumber, Pipe Works, Pipe Dreams... you get the gist, you'll know how this works. You have a tap on one side and a drain somewhere else. By rotating and swapping pipes, depending on their type, you create a route to the drain, slap open the tap and watch your handiwork waste valuable aqua. The aim is to do it in as few moves and little time as possible, awarding you with different trophies. It is fun, very polished and pretty addictive.

Yet much it falls short as well, because this is just a demo of a download game. There are forty puzzles to beat, incorporating all the different obstacles and twists here and there. But it never reaches a certain crescendo and the game could certainly do with an additional twenty levels to really crank up the difficulty (fittingly the commercial game contains 100 levels). Even through the first play I mainly achieved gold trophies - as much as I would like to thank some unquestionable savant-like abilities towards plumbing, it's really just a matter of the puzzles not being very lateral. The ones where you rotate pieces, in particular, are so intuitive that you'll nail most them in the first go.

Even the two difficulty modes - casual and hardcore - just add time limitations before water slowly starts trickling into the pipes. It is slightly more nerve-wrecking and you need to compete on the hardcore level to get platinum trophies. But if you have run through the puzzles before it's not that much of a challenge, as the puzzles are still exactly the same. Finishing the game does unlock Match Mode, where you have to match a presented configuration of pipes against a running clock, but it's not quite the same as the main game's puzzle goodness. If Aqualux fails at one major thing, it's not informing you - after beating the game - that there is a download version available.

Aqualux has a lot of polish and it is fun to play. If it falls short, the download version is exactly the same but with more than twice as many levels.

If you enjoy the Flash version, you can download a version with features and complexity that go beyond the flash version. Plus there's an array of new pipe types and original elements in it. Get it directly from the developer.

I can't believe this is in flash now! I played this as a paid download and found it loads of fun. It's a pretty calm game with just enough challenge.

This... is kind of boring, actually. And I usually appreciate simplicity (read: low difficulty) in games. But there's just nothing here.

Well done to the makers for a slick and a nice variation on the plumbing theme.

Would play it more but some of level (excuse the puns) solutions aren't water tight. Doesn't fill one with confidence for the harder levels (e.g. easy 1, 4, 5).

I found that this game didn't bring anything new to the tables after a few levels, and therefore I got bored.

Didn't make sense to me that water can flow straight over an opening underneath - as found in one of the early levels and also shown in the screenshot.

Glad to see a Portal reference that doesn't involve cake.

Don't know why y'all are ditching Aqualux. But I thought it was great!

CasualDweeb, we did explain! Some of the complaints can be resolved.

I don't think adding the minimum number of moves adds anything to the game. Indeed allowing free play may add more enjoyment. Add a little sandbox,

do you know what all the trophy are??
also, is there any secret element in this game?
how can i get access to it??
i want to know what has given to me for the trophy light water... i just forget it