Apple Collector is a unique puzzle/physics game written in Java by Matt Hopkins. The goal of each level is to collect a certain number of apples within the specified time period. The delicious fruits pour out of containers and you must draw girders to bounce them into the right basket. The game begins simply enough but introduces multiple colors of apples and other complications that will make your apple picking days much more challenging. 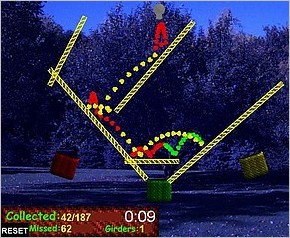 You guide apples into their baskets by setting up girders for them to bounce off of. Simply click and drag with the left mouse button and release when you're ready to place. You can remove the structures by right clicking or tapping the spacebar while the cursor is over a girder. This is the bread-and-butter of Apple Collector and it's important to build an intuitive sense of where girders should be placed and exactly when to place them. It's equal amounts of timing and precision and it takes some time to get the hang of.

The wooden boxes at the bottom of the screen are confusing at first, but really they're an integral part of the gameplay strategy. Each box represents an event and has a timer bar indicating when that event will end. They also have icons on the face showing you what exactly will happen, plus a white string tied to the object it will affect (usually the apple cannon). It sounds a little complicated, but once you play the game you'll see how easy the system works. When you're playing all you have to do is glance at the bottom of the screen to see what's going to happen next.

The levels get tough pretty quickly, forcing you to become proficient at girder laying at a rapid pace. Fortunately you can retry a level at any time or just skip it and move on to the next. There's also a downloadable version of Apple Collector that allows you to create your own levels with a little programming finesse. Just follow the instructions on Matt's website to make your own apple collecting bonanza.

Analysis: When I first saw Apple Collector I was overwhelmed with moving objects and seemingly complex gameplay. After reading the short intro everything fell into place and I was hooked. The great thing about this game is that it involves both quick reflexes and a logical mind. You can't just place girders willy-nilly (did I just type that?), you have to know what to place and when to place it. Quite a remarkable game stuffed into such an unassuming package.

Thanks to Matthew for sending this one in!

woohoo! this game is a lot of fun. unfortunately, it was a little short for me. good to hear that levels can be created because this game seems like it should have a 100 levels but it only has 13.

another great game, thanks

i'm completely stuck on level 6 (with the rotating box). i can't get the position of the girder right, and then the timing is confusing too, because by the time any of the apples get to the opening on the right, the box turn again.

this is a lot of fun though.

It makes me want to learn vector physics...
*sigh*

This is quite an addicting game. I'm currently on my billionth try of Level 12.

My biggest complaint is that when you are out of girders and try to place another, it removes the oldest girder from play, often without my noticing it has gone. If I'm still using that one, the whole level gets messed up. A better way (from my perspective) would be to not allow the player to place a new girder until another one has been deleted. That way, only a few apples are lost, and not a whole string of them.

Thanks for all the feedback everyone. It feels great to know people outside my small circle of friends have played it.

jay: Thanks for the exposure. It makes me feel a lot better about the time I've spent on my projects and will help keep me motivated on my current game.

giftedweasel: You're welcome to the source code if you'd like it. Just email me and I'll send it your way.

Mikey: You're definately correct about the lack of levels. I'm busy working on future projects but I'll gladly add levels to the game if you or anyone else can make and send me one.

Fun game. Only one complaint: it seems pretty silly that you can't remove a girder. To get rid of one you'd just put down you essentially had to find a useless corner of the screen and "dump" one (or several). It made the game more challenging, so it could have been deliberate, but it felt more like an oversight.

Oh, I forgot to mention. I love the fact that you can just skip levels. That should always be an option for these types of action/puzzle games.

Talk about oversights..."rtfa"...you can right click to remove the girders.

I'm a moron. I read the review as "you *can't* remove the girders by right-clicking or using the spacebar." I'm going to give the game another shot. Should be much more manageable now.

i cant get 10
i just dont get it
need help

This game is a load of fun. I would really love to see more levels.

Actually, this game is nearly identical to Enigmo, which has been around on OS X for two or three years now. Enigmo has a bit more to it, though, allowing you to place different types of objects (cannons that redirect flows, bouncing platforms, sponges, etc.) that interact with the falling droplets (instead of apples) in different ways. The different types of droplets (water, oil, lava) also interact with one another making for a fun and complex game.
-Zach

this game doesnt seem to be working anymore

I remember a game I played where you had to use a freehand draw tool to create dams to block a flow of "water" from the top of the screen. The main aim was to make it run into a bucket instead of draining away at the bottom of the screen or getting stuck in depressions and wells.

It was a bit like lemmings only with water.

I'm stumped if I can remember the name. Answers on a postcard if this rings any bells...