The ants went marching one by one, two by two, three by three, and frankly, in all the numerical configurations you can think of. The war against the giants from the sky was hard fought, with grievous damage done to both sides. Queen Antoinette lead the way in producing the uneasy armistice that now governed relations between the two people. Today, the ambassador from the sky kingdom is arriving, and if they make a good enough impression, peace could last for generations. You are that Antbassador. Or rather your finger is, and man, doesn't it just look dapper in that top hat? Antbassador is a QWOP-styled physics platform game by Kevin Zuhn and his team that has been declared the winner of the Ludum Dare 30 72 hour "Connected Worlds" game jam, and it has more than its fair share of ant-tics to show. 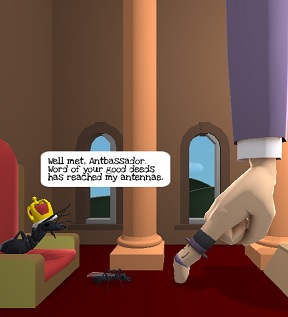 Reminiscent of Octodad, and indeed built on its engine, you move the Antbassador around the screen using the mouse (the game isn't particularly trackpad-friendly), and clicking to curl themselves up. As you make your way though the ant village, there will be all kinds of cit-ant-zens you can assist, hopefully without squishing them too badly. Make your way through all the charity and palace intrigue, and you'll get an ending that's jubil-ant indeed! We've seen a number of "connected worlds" games from Ludum Dare 30, like Generation Ship and On The Edge of Earth: 5000 that features a human character as but a tiny speck facing the vast and dangerous mysteries of the universe. And while those have been certainly enjoyable, Antbassador placing you in the roll of human as a giant, clomping, destructive, barely-controllable force is a novel twist and one that's rife with comedic possibilities. Of course, it will be up to the individual player to decide if the intentional frustrations of gameplay are balanced by the hilarious dialogue and animations. Overall, though, Antbassador will need only a couple of minutes of gameplay to demonstrate to why it made Ludum Dare voters so jubil-ant!.

This is cute as all get out and I really wanted to enjoy it, but it's nigh-unplayable on touchpad or trackpoint. Which, come to think of it, was pretty much my response to the Octodad games as well.

While the trackpad issue is a fair complaint, I played this on a trackpad and had little trouble with it. I dunno, maybe I'm just really used to using a trackpad.