Broom attack! Also, you might be trapped in a dream. Or some other sort of subconscious realm. It's tough to tell, but judging from the strange sights and the cryptic "as legend has foretold" messages from sages and statues, there's definitely something odd going on here. Anodyne from Sean Hogan and Jonathan Kittaka is an adventure through a melancholy world that plays out like a classic 16-bit RPG. It borrows some of the best micro-concepts from games like The Legend of Zelda: Link's Awakening, Yume Nikki, and even EarthBound, creating a world that's as innocent as it is moving and as dangerous as it is surreal.

With a straightforward action RPG setup (though, without too much action, and not an RPG proper), you won't have a hard time getting started with Anodyne. Move around with the [arrow] keys, interacting with people and objects with the [C] key. You can also save your progress by standing on checkpoint squares and pressing [C]. Early on you get a broom, your weapon of choice in this here dream world. It lets you attack enemies, sweep up dust, and one or two other interesting uses that we don't want to spoil here. Later, you'll nab a few items that give Young new abilities. Abilities we also don't want to spoil in a review!

Sort of the driving point of Anodyne, apart from its journey of self-exploration and discovery, is gathering cards. There are almost 50 in all, found in treasure chests hidden throughout the overworld and deep inside dungeons. Once you gather all the cards in an area, a gem will light up in the Nexus, your hub zone that offers quick-warp portals to different parts of the world, letting you know you've pretty much cleared that chunk of the game. Certain gates halt your progress until you have a certain number of cards (or special keys), encouraging you to stick your nose in every corner of the game to see what you can see. 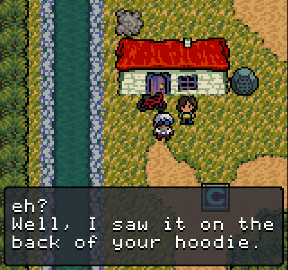 Analysis: Anodyne sets you free in a wonder-filled environment that contains just as many neutral encounters as it does enemies. Everything has a modestly eerie undertone to it, sort of like playing a David Lynch movie. There's also this constant sense of foreshadowing in everything you see and do, as if something preposterously grand is waiting for you around the next corner. Or just plain preposterous, you never can tell with this game.

Anodyne looks like a classic action RPG, and it indeed feels and moves like one, but the star of the show is the artwork, story and setting. Sure, there are enemies to kill, but they're almost incidental. Yeah, you collect things and get new equipment, but just so you can explore more of the map, not so you can feel stronger or anything. Even with the focus on atmosphere, Anodyne isn't locked in by a wordy narrative, and it's far from being a text heavy game.

If I can break the tone of the review and get personal for a second (as if you could stop me), Anodyne is the most fun I've had with an adventure/RPG game since the last time I played through Mother 3. Listing all of the things Anodyne gets right would be a list of all the things Anodyne does. Unless you're particularly averse to exploration, there's no reason not to sneak up and give this game a try. It's one of those rare gems that gives you an experience you wouldn't trade for anything.

Windows:
Play the browser demo Get the full version (GOG.com)

Linux:
Play the browser demo Get the full version

I'm playing this game in a fairly well place until that place where you have to "stabilise the pattern". The developer's site's FAQ didn't help me at all, either:

Q: I am stuck at That Puzzle with the colored rocks.

A: I am working on making that easier. For now: Big keys, bosses, purple stays, colors in place of the image tiles.

I'm also stuck at a tile puzzle, but this one is for a ??? item, and is behind a wall on the west side of that same area. Tried everything I can think of with no luck so far, if anyone has a hint...

Hi, thanks for the article again! I'm Sean and was one of the makers of the game. For those stuck on that puzzle, I removed it from later patches as it was unfair.

Neat game. :) I'm stuck at the first temple, in the room with the metal gate, the button in the upper left and the two dust clouds. I've been everywhere and I'm stumped on what I should be doing in that room. Am I just missing something obvious or is that the end of the demo?

Looks like a fun game and I'm a huge pixel/retro game fan. However, I already feel borderline on want to play let alone any cheap price. Sorry, but too many games floating around like this (even this has pretty music and puzzles). Perhaps if this was more puzzle or strategy heavy I'd donate $.

I'm stuck on the first boss. I dodge whenever it does the charge-at-the-corners move, and pick up the dust from that to block the follow-up beam, but how do I actually inflict damage on it?

Sean: I'm stuck on post-game content. There is a 47-card gate, and now I only have 45 cards. On the last page, the first, second card from top row, and the first card from second row are missing. There is also a treasure chest in the forest area that I couldn't open because of the gate... Since there is absolutely no walkthroughs on the whole Internet about this, I wonder if you can give a hint about these 3 cards. Oh, and maybe the post-game secrets - I suppose there's 16 of them but only manage to find 5: first 3 on first row, and first 2 on second row.

If anyone is interested, this game is currently having a promotional sale at http://www.anodynegame.com/ through humble store making it available at the super cheap minimum price of 1$.

@uncopy2002 - I have the first two cards in the top row of page four! I am, however, missing the first two from the second row, as well as center bottom...

I can remember where the first card in the top row was, and possibly where the second was:

In the pyramid looking area (veerryy early in the game), use the swap bracelet to go to the upper left corner of the map. There will be another entrance into the temple.

Once inside, it will appear to be a dead end. Use the swap tiles to advance N a room.

The next room is a narrow empty room. Use swap to avance N another room.

Jump over the pits and enter the warp gate.

In the next area, follow the path until you get to another save point with two portals.

IF YOU GET STUCK: return to nexus, warp to the 8-bit dungeon with the monsters that kill you quickly and let them kill you so you respawn at the last save. It's a LOT faster than trying to go back through the pyramid map.

I think the portal on the left has a lot of random rooms that are easy to get stuck in, but if you do it right, I think this will get you the card from page 4, row 1, column 2. I'm not 100% sure.

Anyway, the portal on the right is where you want to go to get page 4, row 1, column 1.

Once you go through that portal, you will find yourself on a beach.

You should be on a small island and see weird black squares on the left side of the screen. Use swap to use the island to reach the squares. Head West.

Now you are in a room, standing on two black squares. While standing on the bottom one, swap the upper tile with the wall to the left, allowing access to the chest (containing a card!).

Now, MAKE A SAVE. Please do not forget, because...

If you would like, you can use swap to move the box, and head South. BUT- if you try to leave this room- going either South OR NORTH, you will be returned to the title screen... !

I'm stuck at the city elevate level. Can't seem to get to the other side of the wall. Level 2. I keep going up and down levels trying to find a way to that bow but no luck.

@Peter Page 4, row 2, column 2 I'm fairly sure I found in the 8bitish area labyrinth with the Zombie guys. After warping in, head left once or twice then up until you see a line of 3 spikes in the middle top. Go to that screen and there should be a portal you can swap into. Complete the mini gauntlet and you get a torch card.

Hope Sean is still around to answer this. I made it to the Briar!! I did the 3 tile swaps and ran into the vine if I keep going straight. Turned around from there and made my way past the talking/melting snowmen (3). I did the first couple run and jump cattycorner and now Im at the 3 or 4 blowers pushing me off to the right. How do I get past that? Is there something I can turn off or is it just keep jumping and pushing left and hope for the best? This is really a great game. Thanks for all the work you guys put into it.