Help! Help! The big, bad wolf is going after the animals of the forest and is going to eat them... err, I mean, is going to kick them out so he can build a giant shopping mall! Small is Beautiful puts us in a match-3 puzzling world in Animals - Home Free!, where Mr. Wolf has given up his quest for succulent pig treats for the equally alluring (if less environmentally friendly) hobby of construction! It'll take some careful planning and a watchful eye on the clock to bring him down and save your furry friends.

Before you can take the wolf down, you'll need some friends to help you. Unfortunately, they all seem to have been imprisoned in chests covered in locks of silver and gold. To open the locks, you'll need to match-3 your heart out to create matches of 4 for silver keys and matches of 5 for the gold ones. Line three of those keys up, and you've opened yourself a lock! But, unlike most games of this genre, you are not required to make a match to swap pieces. You can, instead, move a tile square by square to get it to the desired location. Just watch out for the unintended matches! Once free, the creatures will clear the way to more helpless animals and ultimately aide you during the boss battles against the wolf. 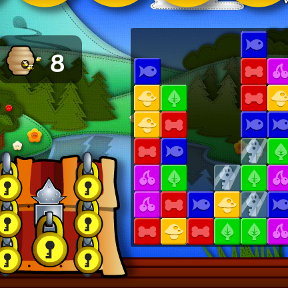 Lording over each of your actions is the ever-present clock. During each of the stages, time slowly advances from sunrise to sunset. Once a day has ended, the wolf's destruction takes its toll and one of the stages becomes polluted. Now, when played, you'll have to rid the grid of pollution before being able to make matches toward the keys (or honey). To lower the level of black, oily goop, you'll have to match a set of green leaves, which are created by making matches of 4 or more. Sound like it may be too much to handle? That's where the bees come into play. In a level, after saving a creature, you can additionally help a honey bee fill its jar simply by making matches. As long as its jar is full and its level is pollution free, the bee will belong to your hive, which can be used to do a plethora of things in any given stage: lower the level of pollutants, open a lock or cause damage during a boss battle. To be used when you're short on time (or patience)!

Small is Beautiful has done a swell job of creating a fresh experience on what may seem like a tired genre. They've also been able to get the message across of keeping the environment clean without slapping you in the face with it. They've kept their cute sense of visuals, much like a previous title of theirs, Finding My Heart, while also including a bit of edge where appropriate. Animals - Home Free! is a game worth playing, whether you care about the message or not, and with the included save feature, the several hours necessary to complete the game need not be done all at once.

Looks like a ripoff of Pet Rescue Saga to me...

I wonder why it's always the wolf who gets the short end of the stick?

Had to go and download the game because I had never heard of it.

I would say that your use of the word "ripoff" is inaccurate. Do the games have similarities? Yes. There are blocks, there are multiple levels, there are cute animals. But that's it. The gameplay is different (samegame vs. match-3) and Animals - Home Free! has an actual storyline and finish line whereas Pet Rescue Saga is just a conglomeration of levels. Plus, there's that added aspect in PRS of having only so many lives you can play before having to wait for it all to replenish.

I don't mean to argue with you, but I find it unfair to the developer to say that their game is a ripoff of another one when it actually isn't.