Finding yourself dead is a real downer, but when a mysterious voice informs you that you can live again, as long as you do what he says, hope will spring right back in your step. Which is saying something since you're a floating mass of darkness. Only instead of having to redeem yourself, or enlighten your mind, his quest for you is much, much darker. Your only goal each level is to enter a portal, but you must have a body to do so. There are other living creatures around that you possess with [X], but then a new rule appears, and sacrifices are needed in order to power the portals. Are you willing to commit such crimes? Do you really have a choice when there is no other way in this macabre puzzle platformer by Jord Farrell, Mark Sparling, and Emma Mochi? AnIMa is a haunting game, with the disturbing sound effects and the chilling white noise that spreads across the screen with each possession. With its unsettling themes and clever puzzles you'll be sure to enjoy it even if it is a small package. 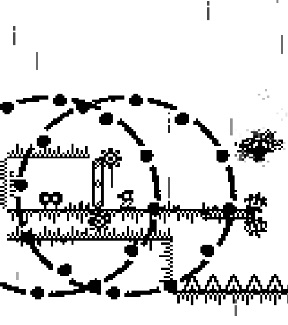 Things start off uncomplicated. Float around each level using the [arrow] keys. Borrowing a body to pass through the void, using [C] to advance, isn't that big of a deal. But then the voice informs you that you must power the portal by killing the very creatures who were involuntarily helping you. When that doesn't seem like it can get any darker, the powerful voice makes it very clear what you're doing if you choose to listen to him. His excuses for your actions only make you more aware of what atrocities you are committing, but this is where AnIMa falls short. This theme is a deep and dark one to explore, but it only holds you under for a few seconds before ending the game, and the ending doesn't quite feel like it finished its story. Perhaps a sequel will arise that will flesh out this dark tale more, but until then the puzzles are still enjoyable. The whole feel of the game is perfect for this creepy adventure with its harsh sound effects that bite at your ears, and cluttered screens trying to keep your mind off your actions. It leaves you wanting more but doesn't feel like a waste of your time even without the solid conclusion. So go and make a few sacrifices. Gaining your life back is worth a few others losing theirs. Right?

And again, not for Chrome users. Sad face.

Don't worry Jazzer, it actually doesn't seem to work on Firefox either, even when I disabled UBlock. Download only I guess...

I'm not sure what you mean. I played it on Firefox without any issue.

As for Chrome that is my browser of choice but since this whole issue with Unity I went ahead and got Firefox as well.

Firefox worked for me too.

I liked it overall. There was room for a lot more puzzles involving more characters to possess, but they weren't necessary. Had it gone on longer I think the aesthetic would have become a liability.

As a short, quick game with a handful of simple puzzles, it was excellent.

Chrome no longer supports Unity, per their own decision. I suggest either downloading the file, an alternate browser, or Googling the instructions on how to re-enable the extension for Chrome on your system. :)