They've been knocking over piggie buildings for years. Isn't it about time those birds did something crazier? Rovio sure thinks so, and with Angry Birds Go! the feathered flappers take to the hills in a wild racing game with karts a-plenty. It's got power-ups, a variety of modes, multiple vehicles to choose from and customize, and yeah, piggies to torment. All in the name of a first prize cake! 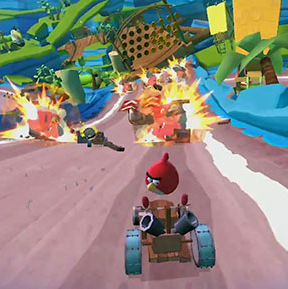 Choose from tilt- or touch-based controls in Angry Birds Go!, pull back on the slingshot and let the race begin. You don't have to worry about braking or accelerating, just guide your kart to collect coins and avoid obstacles and you'll do just fine. Different modes have you smashing fruit and knocking over blocks, racing against the fuse clock, battling against a herd of opponents, and boss races where you have to defeat a special character to unlock them for subsequent runs.

Not to summon too much rain for this parade, but Angry Birds Go! does feature a very healthy amount of sponsored and premium content, largely in the form of in-app purchases. The most frustrating aspect is the credits timer that limits how many races you can compete in until it recharges. You can fill it up with an IAP, but the freemium "you can't play now haha lol" feature never feels good when it bops you on the head, especially not in an action game where racing tracks over and over again is the central mechanic. To top it off, some of the shop items cost an upwards of 50 USD. Hope no one taps there by accident.

Angry Birds Go! does make a nice entry in the Angry Birds franchise, and it pulls off the quick and simple formula of arcade racing quite well. It's a little repetitive, though, and certainly won't make Mario Kart feel obsolete any time soon. The in-app purchases are the biggest scar, especially the obnoxious credit timer that seems to be out of whack. If you don't mind waiting to play the game you just downloaded, Angry Birds Go! is a tidy little experience that's easy to get into and offers a nice distraction for the train ride home.