Ready for a new dungeon crawl? Slashwear Interactive greets us with Ananias, a fantasy turn based rogue-like game with randomly generated maps. This game is so great they wanted to make sure it reached as many people as possible, so not only is there a free download version (as well as a premium one with extra classes) but a mobile app for Android (iPhone coming soon!) for people who don't want to play in their browser, and even an online version that you can play with friends. Once you try Ananias you'll be happy for so much choice on how to play. This adventure doesn't start off with a story or full instructions but it's not hard to figure out. Click to move to that location, or to hurry through an area without an enemy click on an arrow and you'll zip through to the other side. You also get to pick a companion in the beginning, such as a dire wolf, a lynx, or a gray little pony that helps you carry more but can still give a good jab here and there. Upgrade yourself when you pass each level, collect statues for your collection, and above all, slaughter the monsters and get the treasure. 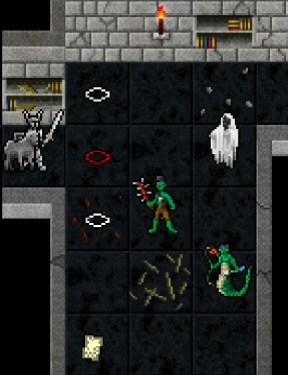 As I stated before this game doesn't come with a lot of instructions, though most things you can figure out through the descriptions, such as a mention of a dagger being used for throwing will likely mean it's less suited for melee. Mixing potions can be tricky, as you need two parts, an essence and a basic. Some of these are clear in the descriptions, and others aren't... when you figure out what is what, you need to drop the essence and stand on it before using the basic, and then pick the potion up off the ground. But that's where this game gets interesting. There are a lot of things you need to explore and test out, with many different potions, some of which can only be used by certain character classes, the same as with the many spells. Monsters are more than just a basic hit machine... some can disarm you, others really damage your armor, paralyze you, or have other abilities. Usually the description doesn't outright tell you what they do either, but it's fun to explore and learn really quick what ones you're okay facing off against, and the others you'd really rather avoid.

Ananias has a lot going for it, but there are some minor bugs here and there, though they aren't game-breaking and will likely be fixed later on. The great risk in many areas makes it very addicting. Unlike other RPGs, when you pass through an area you're given a choice to increase your abilities, and any option labeled with a question mark is a gamble that could give you a great reward... or nothing at all. There is a chance spells can backfire against you, and even the wells of water you can drink from have a random, though normally positive, effect. Since everything is randomly generated, sometimes a run will be ruthless with no armor to replace the stuff you're wearing (which is degrading with each hit), or lack healing potions. It keeps you latched on and debating if that scroll across the room is worth the three guys you need to kill in order to get it. Ananias is a fantastic roguelike game where restarting is half the fun.

Mac:
Get the full version

I like it. It's easy to start, and the enemies are interesting. I like how, unlike some roguelikes, each encounter is restricted to a single room. I found the pets to be more of a liability than a help, though.

Only big glitch for me (chrome, Windows 7), was that the account creation and sign in process each resulted in an unresponsive window.