Who was the last character you played in a horror game? Chances are, even if they weren't a laser-toting space marine, they were probably at least an adult, and thus physically capable of basic tasks and defense. But in Krillbite Studios' indie adventure game Among the Sleep, you're just a toddler... and you're all alone. Late at night after your second birthday, when you received a very special teddy bear, you're awoken by something... strange. You don't know what's happening or what's wrong, but you do know you want your mother, who has always made everything all better. Too bad you can't find her. The deeper you go into the house and what lies beyond, the more you'll begin to question what you're seeing and hearing. After all, you're just a little kid, and everyone knows little kids have overactive imaginations... right? With subtle storytelling and thick, surreal atmosphere and imagery, Krillbite Studios has created an adventure that's at once one of the most magical and most terrifying games I've played in a long time. 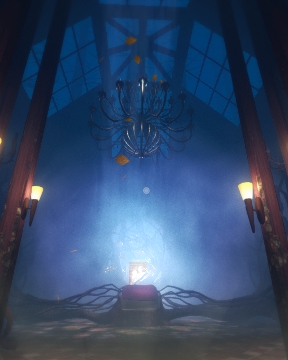 Among the Sleep sort of controls like Amnesia: The Dark Descent, but for babies. Which is to say, it's physics-based action adventure from a baby's perspective. You use [WASD] to move around, holding [shift] to run or alternating between walking and crawling with [CTRL], and climb with the [spacebar]. Being only two years old, you're not very big, and simple things like opening a door represent unexpected challenges. You can manipulate almost everything by clicking and dragging on it to move it around, which can let you, say, drag a chair over to the wall and climb on top of it to reach the doorknob, or pull out drawers to use as steps to reach higher ground. If you're holding an object, you can toss it by right-clicking. If you're some place dark, you can hit [F] to hold Teddy, and he'll emit light for you to see by. You soon discover that you need to find four memories, or rather objects related to memories, to reach you mother. Most of the game is simply figuring out how to get from point A to point B with your puny baby physical limitations, or gathering a certain number of objects. There's not really much puzzling to be done, and finding your way around is never really that difficult since most areas are very linear. I realize babies don't typically engage in a lot of complex problem solving, but maybe we just aren't pushing them enough.

The physics manipulation here isn't as obnoxious or gimmicky as it might seem, though any motion beyond pushing or pulling back and forth feels clunky. While Teddy will spend a lot of time cautioning you to be quiet and acting as a furry little nerve-frayer, it isn't until about halfway through the game, on your way to find your third memory item, that the gameplay actually gets more difficult. When the music gets all ominous and the screen starts fuzzing and jangling, you know you need to duck out of sight beneath something until things calm down. The first-person, knee-high-on-a-grasshopper perspective exacerbates how harrowing this is in the extreme, making it difficult to know where you're headed at times and what might be behind you, just out of sight. At one point you have to creep down a dark hallway cluttered with cans and stacked bottles, desperately trying to avoid making any noise by jostling or breaking something, which might bring the attention of the lurking thing you've thus far only glimpsed through cracks. You feel small, and helpless, and vulnerable, and little details like the way pausing the game causing you to cover your eyes, or how you occasionally trip and fall when trying to run, only heighten your anxiety. 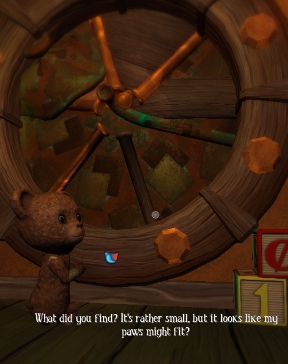 You sort of experience everything in the game with a grain of salt, trying to decide what's real and what's just your underdeveloped baby brain struggling to interpret what's going on around you. That adult perspective and cynicism is something you'd think would ruin the game, but it turns out Among the Sleep is so good at making you feel small and alone and doubting everything you see and hear that it doesn't matter. You can't dismiss everything, because not everything has an obvious explanation. This is a game that understands the value of a single sound and an unfamiliar shadow on the wall, and from your toddler perspective everything is huge and distorted. It uses jump scares, but it doesn't rely on them, because you can and will scare yourself even worse. It doesn't help that your mother apparently owns six times as many long black coats as any human will ever need, ever, and likes hanging them in strange places. (Hey, some people juggle geese.) Owls have never seemed as ominous or menacing. Trust me on this one.

There's an enormous emphasis on environmental storytelling here, and once you start noticing all the clever little details, you won't be able to stop. Not enough games know the value of subtle symbolism, but Among the Sleep gets it right, and manages to twist your expectations of how things really are in the process. Most people will think they know what's going on after the opening scene, but the game may surprise you... and probably depress you a bit, since the ending isn't a very happy one. It fits with everything you've experienced, and makes reflecting back on the meaning of everything you've seen rewarding, but it also feels rather abrupt and flat considering the journey taken to get there. Most players will probably be able to finish the game in around four hours, and there's a free DLC in the works to be released later on. With its stunning visuals and heavyweight atmosphere, Among the Sleep is a game that's as beautiful as it is horrifying, and an absolute powerhouse of a horror experience.

In case anyone is on the fence about the content, I want to mention this game is completely bloodless and without any gore or real violence, but it earned its Y rating because (spoiler, obviously)

at one point your child character is struck by an adult, with child abuse and alcohol being a central theme.

Just so y'all can make informed decisions.

I got this game through the Kickstarter, and I've finished it. I think that the analogy to the Penumbra/Amnesia games is an apt one, except that (spoiler more for Penumbra/Amnesia, than Among the Sleep):

in the Penumbra games and Amnesia (or at least, The Dark Descent, as I've not played A Machine for Pigs) there are plenty of sections where the monsters have clearly been scripted to turn up at inconvenient moments, or at least had their movements confined to particular areas. In Among the Sleep, there are scripted triggers, but none of them seem to involve actually putting your character in danger. I barely even saw the monster in Among the Sleep, and only once did I actually feel in any danger from it.

Personally, I found the teddy bear to be much creepier than the monster.

Despite the obvious hints regarding alcoholism running through the entire game, I was still kind of expecting teddy to reveal that I'd been running his errands for the whole game and to thank me for releasing his full, evil power, or some such thing. I only picked him up and put him on my back at the start after I spent five minutes searching the room for another way forward.

I'm with you. I totally expected

Teddy to be evil. The opening dialogue where he has you take him somewhere "extra dark" was too, too unsettling, and I don't know if that was intended or not. Especially the delivery... all his lines are whispered, and they come across creepy and insinuating rather than as if he's scared himself.

Initially I thought that

the story was going to revolve around an abusive father, mainly because you can see the place on the mom's hand where a wedding band should be, and she has that confrontation with him(?) at the door in the beginning. Once I realized the monster in the Well level looked more female in shape, though, I figured out what was happening. It makes me wish the ending hadn't been so abrupt... it felt like there should have been an extra scene or something rather than the fade-to-white.

This is the kind of game I really wish had a demo so I could figure out if it was too scary for me!