It's dangerous in the primordial soup, a place where infected organisms roam hungrily looking to consume or destroy anything that crosses their path. At least, that's the scenario behind the fantastic Amoebattle by Grab Games, a real-time strategy gem created for iOS devices. Inside, at the microscopic level, it's a constant state of warfare, and war is heck. 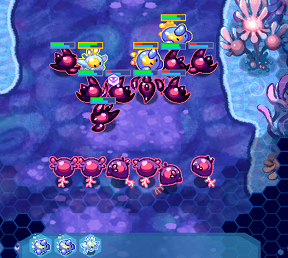 Amoebattle begins with a briefing from a friendly robot, the AMI, who lets you know what is going on in this strange world. You begin with a basic amoeba and pretty soon are directing microbial troops into battle against other, more violent (and infected) types. As each scenario progresses you, aided by your faithful robot companion, will learn how to navigate, how to direct your eager microbes, how to mutate them into more powerful forms, and how to add to their numbers. One of the great joys of the gameplay is how simple and smooth the touch screen aspects have been configured, allowing you to select some or all of your organisms, explore, and direct attacks in pretty complex patterns. Along with learning new forms to mutate your troops into you can earn new types of probes that slow down or poison the enemy as they attack.

There are twelve different campaigns in Amoebattle, each one longer than the last. While the first few are fairly easy and mostly deal with training and becoming familiar with the controls, the later scenarios quickly become difficult and long-lasting, severely testing strategic skills and creating a lot of gameplay. Nine different types of amoebas ensure that gameplay is surprisingly complex, especially in the later levels. The visuals are stunning and reminiscent of watercolor paintings, lending an almost surreal feel.

As a nice introduction to the RTS genre or for more experienced players, Amoebattle is definitely a good choice. Gorgeous visuals, intuitive controls, complex gameplay, what's not to like? Other than wandering around and being attacked by infected organisms, that is.