Amnesia: A Machine for Pigs

2010's Amnesia: The Dark Descent by indie developers Frictional Games was an instant hit, a psychological horror adventure game that played on your fears with a haunting story. So it's no surprise, then, that the sequel Amnesia: A Machine for Pigs, this time developed by Dear Esther team The Chinese Room, has some big shoes to fill and expectations looming over it. Our protagonist awakes, dizzy and disoriented, in a dark and silent house, in a bed surrounded by a cage whose door has just been opened. Hearing the phantom laughter and pleas of children, he has no choice but to stumble forth in search of them. But what are all these locks and bars on the doors, dressers, beds and windows? What are the ornate sculpted pig masks that silently watch you from every room? Why do you suffer from disturbing, disjointed memories? Why are there so many hidden passages in this place... and why does it shake and groan around you? There are a lot of questions, but the answers might not be the ones our hero was hoping to find. 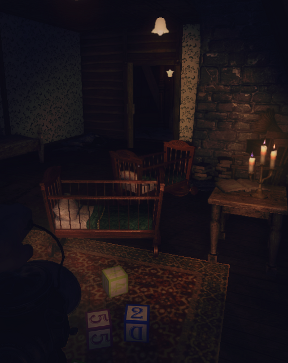 The controls remain essentially unchanged. You use [WASD] to move, left [CTRL] to toggle crouching, and the mouse to look around and interact, clicking and pushing or pulling to manipulate objects and doors around you. To drag heavy objects like crates, you need to click and hold on them, and then use the movement keys to pull it around. Unlike the original game which allowed you to essentially redecorate entire rooms with stacked junk and objects, there is considerably less to fuss with, and things you can interact with tend to be limited to certain containers, chairs, and plot-related objects. Press [M] to view your journal and re-read documents or notes, and make sure you refer to them often for clues as to how to proceed. Once you've found it, [F] will turn on your lantern. You don't have to worry about fuel, but you do have to worry about it making you more easily spotted. Because while this time around there are no health or sanity attributes to worry about, or even an inventory, you're still not safe.

Analysis: In a way, by starting off at a slower boil in a comparatively more mundane setting, A Machine for Pigs could be seen as vastly more unsettling than its predecessor. Trading its stone castle walls for the ornate but more familiar trappings of a house, the game grounds itself in a way that makes its surreal, terrifying events feel too close for comfort. I was motivated by the story and masterful worldcrafting in a way I wasn't by its predecessor. A Machine for Pigs keeps you guessing and dreading for a long time, slowly painting a picture of both your character and the events leading up to the game even if you guess the twist long before it happens. Though it does have ties plot-wise to The Dark Descent to the point where you won't understand much of the latter half if you haven't played the first game, A Machine for Pigs feels like a far grimmer tale of personal obsession, grief, and madness that will unsettle you more than outright terrify you. 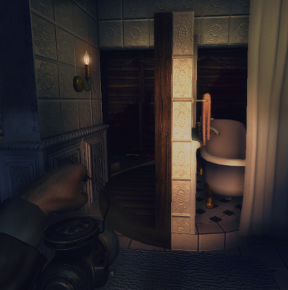 It feels far subtler as well. Loud noises and surprises are to be had, for sure, but A Machine for Pigs frightens far more with the smaller details, like the way the eyes of a mask follow you wherever you go, or turning and finding one sitting silently in a room you just left, or simply discovering an object in a different location than it was before. It makes your skin crawl as you constantly second-guess yourself. Maybe that's always been there. Was it really on the other-side of the room before? Should I just go ahead and void my bowels now or later? It creates an atmosphere of insidious unease and paranoia, playing with your perceptions in ways big and small to craft the sort of atmosphere that makes you question your sanity in ways few games ever manage. Throw in some top notch voice acting and wonderful area design (whoever picked out that painting of the lady with the knife is a monster), and it's an extremely polished title.

It's a much more straight-forward adventure experience too... go here, do a thing, go back to see what that thing might have triggered. Though the developers were thoughtful enough to provide me with a spoiler-free walkthrough, I honestly didn't need it and might have just preferred a map instead. Most puzzles are fairly obvious and simply require you to throw switches, bring an item somewhere, or just keep moving forward. Similarly, the lack of an inventory feels like it does little else than draw out the length of frustrating sequences, forcing you to go back and forth to carry items where they're needed one at a time, such as the fuse-generator sequence in the cellar. It feels like you're being lead by the nose rather than actually exploring and discovering through challenge and thought compared to its predecessor. You'll go hours without getting your first whiff of monster, and those few sequences feel almost token and jarringly out of place compared to the rest of the game's pacing. It just doesn't feel like that's the sort of game A Machine for Pigs was destined to be, but they were shoehorned in anyway. 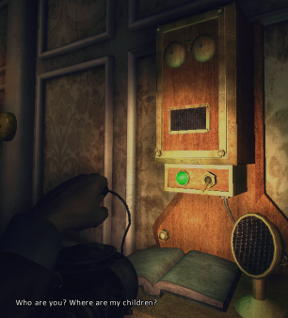 The other potential issue for many players is, well, A Machine For Pigs just doesn't feel very Amnesia-y. Even ignoring the lack of sanity and health meters, it's overall a drastically different game in tone and setting to the point where players expecting more of The Dark Descent's pell-mell blend of adventure and stealth might be a little put off given the namesake attached to it. I mean, don't get me wrong. Taken on its own merits, A Machine for Pigs is an excellent game with brilliantly executed subtle terror and mood that you'd be hard pressed to find anywhere else. But, well. A Machine For Pigs is an incredibly intriguing, immersive, engrossing game... it's just not necessarily scary in the "point a camera at your face and make a YouTube video" sense its predecessor became famous for, which is worth considering if that's what you were hoping for.

It feels, in some ways, like it might have been better to leave off the Amnesia title and ties to the original story, mostly because by itself, A Machine for Pigs is so well conceived of a horror story it ain't funny. It's chilling, sad, and disturbing by equal measure, with frights that are more cerebral than they are things leaping out and going BOO while the music goes REEEE. This is the sort of horror game I wish there was more of, for a lot of reasons. I spent around eight hours or so playing it, tracking down every little scrap of paper to provide more story, and as un-Amnesia-like as it was, it was also an experience I loved in a way. Consider it a grosser, more interactive, decidedly darker Dear Esther in gameplay and approach it as its own beast and you'll likely enjoy every bit of it. Just don't expect for it to be something it's not.

Gotta say I was dissapointed. Pre-ordered, and it just...wasn't "my" Amnesia. It was lackluster, I miss lots of the features.

The story itself is nice don't get me wrong, but it's too generic and 'lols look at our new indie game', rather than what Amnesia was to me.

I watched this as a playthrough on YouTube and...I was dissapointed.
To me, it's a good game. Not a great game, but it would be a good game for an interactive psychological horror game.
However, as an adventure horror game in the Amnesia brand, I don't think it's that good.

After about halfway through, you got the fact that it was very unlikely a monster was going to chase you. And tbh, they weren't that scary to me anyway. Yes, the monsters in TDD weren't scary when you actually looked closely at them, but that was the thing-you COULDN'T look closely at them. You had your lantern turned off to avoid being seen, and coackroaches were crawling over your face as you crouched in the darkness, wondering just what was chasing you. In AMFP, you get to look through a cell and see a pig man playing with some blocks (which, admittedly, was pretty cute.) This works in a phycological way-'oh, no, the piggy's locked in and being abused, but he's the one chasing me, whatdoido' but not in a horror way. Not when you can stare at that pig for a very long time and realize it's just pixels and colours mashed together.
They also took out any dilemmas that made TDD so great. They took out insanity, which I think was a terrible move-the dilemma of 'Do I stay in the light and get seen but stay sane, or do I hide in the darkness and go unnoticed but go insane'. The lantern is basically immortal-you can't switch it off to avoid being seen but go insane-and they didn't have that much interactivity with objects-do I waste valuable time trying to create a barrier out of boxes to hide behind or block a door with, or just run like hell and hope for the best?
I found Mandus a bit of a boring character, tbh. I dunno...I just didn't find him as fleshed out as Daniel.
The pathways are already set out for you-you just follow them. There's no getting lost like in TDD (where I got lost in the Prison for about half an hour in a state of pure panic).
However, the graphics are beautiful, and the story is pretty good. I actually liked the idea of being guided along by that machine talky thing-it gave it a sense of urgency. The voice acting is on the better side of okay, and the music that apparently calms the PigMen down is beautiful and terrifying all at the same time. It's amazing.
All in all, it's a good game for an inteactive story game. As an Amnesia game, though, it's pretty bad.
Please note that these are only my opinions and sorrythisissolong :c