American History Lux is a downloadable war strategy game that takes an often boring subject and turns it into a simple but epic game. It's a whittled-down version of Sillysoft's more detailed Lux Delux title, making it perfect for casual world-conquerors. The game plays a lot like Risk with a few extras and is available for Windows, MacOS X and Linux.

As the name suggests, AHL lets you re-enact famous battles in American history. Although entirely optional, you can read a little background info before heading onto the battlefield. You aren't obligated to learn anything, so don't worry. Each map shows you and the opposing armies along with the territories controlled by each. The usual deluge of manageable tasks is gone, leaving you with just one thing to worry about: obliterating your enemies. 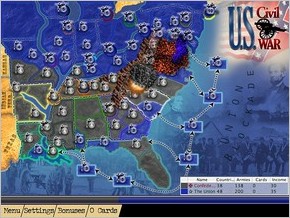 At the beginning of each turn you get a certain number of troops based on the territories you control. Each round lets you place units then mount attacks against bordering areas. After the dust settles, move units around to fortify weak areas, then unleash your opponents' turn and hope you did a good job.

A few extras set this one apart from the usual fare. For starters, there are bonus territories you can control for additional units each turn. There's also an interesting card system where you can build massive extra units by occupying certain areas of the map. Cache in the units before a turn for a massive bonus, then level the enemy with a gigantic force of troops.

The atmosphere of American History Lux is truly epic, helped along by a grand musical score. You can hop right in and start playing the game without knowing the first fact about American history or strategy titles. The game doesn't hold your hand but gives you the freedom to explore your own strategy for victory without any penalties.

Analysis: I rarely indulge in the time-consuming strategy game genre, especially war games which have always seemed too stuffy for me. This one really took me by surprise, however, as it is remarkably simple and caters perfectly to my taste in casual games and craving for strategic gaming.

After abysmally losing my first war, I came back with a vengeance and something else extremely helpful: a strategy. With so few things to manage, the number of strategies you can adopt is impressive. Should you be offensive or defensive? Build your forces on the borders or in key cities? Go for the bonus cards or total obliteration? Your choice.

Even after bowling through the major wars in American history, there are several difficulty levels in AHL that really ramp up the challenge. I can't even begin to imagine what the highest difficulty is like, and I'm actually a little frightened to find out. Still, if you go through the game and find it too easy, there's plenty of challenge waiting for you.

American History Lux is a great casual strategy game, so don't hesitate to give it a try.

I love games like this, especially if there is a multiplayer option. You didn't mention one, so I'm guessing there isn't one. Still, it sounds like fun! =)

This differs from 'Risk!', 'Conqueror!', and 'Axis & Allies' (the board game, not the computer version) in that a lot of the detail (income levels, dice rolls, odds of winning a battle) are smoothed over, so the player just has to worry about troop movement. This has the result that instead of thinking in terms of dollar amounts or percentages of probability, the player just has to think about strategy. So at the expense of details that appeal to the more obsessive-compulsive among us, the result is a war game that is more like chess than the last several I've seen.

An in terms of the educational value, it's very difficult to develop a game that is both fun and educational, but games like this come as close as I've seen. Even if you don't read the background, simply knowing the scenario and seeing the map do teach something. (eg. I have a slightly better visualization of the French-and-Indian War now than I did before)

Anyway, good game. I'd like to see more reviews of this sort of game, as opposed to the more simple 'mouse-exercise' ones.

This is an excellent game. I get shellacked at games like Civilization but this is right up my alley. Simple enough to be intuitive and easy to learn but complex enough that if you make a mistake the computer can punish you.

I was able to start up the game and get playing almost immediately. The icons are easy to follow and navigate though they aren't always self-explanatory. The strategy is pretty straight forward but making specific decisions about where to move armies can be difficult.

I liked the graphics, they were simple and clean but still looked well-done. I have played a few levels and the only thing I am hoping to find are some different unit types but the game would be great even without them.

Hey, thanks for the kind review. To answer Jay's question: American History Lux doesn't have any multiplayer in it. However, our larger game Lux Delux does have it (plus a map editor, more AIs, etc).

The game is cool but it isn't freeware it isa demo and for full version you must give money!

I think he means to say that history as a whole is a remarkably boring SUBJECT. He doesn't specifically say that America's military history is boring.

He means that most people are disconnected from history because it has a "been there done that" feel to it. Most children today don't see a reason to learn about everything there is to learn in History.

History is different than other subjects because the student is largely excluded. You can replicate science and work out math, but history? You just talk about people long gone. Don't get me wrong, I like it. This makes it seem relatively boring to some.

And this game transforms that information into an actual visual fluctuating power. When playing the game, you realize that it's a delicate matter that doesn't include random nuking! It's a scale and a balance, being a part of it gives the player a sense of inclusion. That is, apparantly, a good way to teach history and why leaders act the way they do under circumstances.

An excellent rebuttal, Oak, and spot on! You must be an educator yourself, or perhaps you've missed your calling? ;)

I'd also add that history, as a subject, was my least favorite during my younger years for similar reasons: there was very little if anything tangible I could get my hands on to help me understand the facts being learned.

With the power we have today to make exceptionally engaging and compelling games to entertain and educate, the lessons that humanity have learned throughout history can now be experienced (and enjoyed!) virtually first-hand.

After all, those that refuse to learn from past mistakes are destined to repeat them. ;)

Oak & Jay: Yep, you got my meaning. :-) I love history myself and don't think it's boring at all. But traditionally everyone's eyes glaze over when the subject is mentioned, and rarely do gamers get excited with the prospect of a video game that has something to do with history. Just a general crack at stereotypes. ;-)

The game DOES do a great job at integrating fact with fun, I was thoroughly impressed. I'll have to try Lux Delux and check out multiplayer and map editing.

Actually, I'm not a huge History nerd myself, but I'm relatively political. I'd enjoy teaching, but English is more appealing a subject than History.

Anyway, this is a good game, very involved. I found myself going back to a battle I just won to see if I could do better, or if my victory was just dumb luck.

Heh I don't mind history too much....I just don't like history class >.<
I forget dates and names...and if I have a bad teacher, I suffer. Also, you can't take your time if you're on deadline. I hate rushing through chapters and not having time to read interesting primary sources and historical fiction/nonfiction.

I don't mind strategy games that much, the only problem I have is: 1. I'm not to great at them and 2. Like when I played Advanced Wars DS, I hated putting in such a long commitment to one battle and then loosing (usually because I cluttered up the field with bad strategy and it's just a really slow standstill....^^;;)

But this doesn't look too complicated so I think I'll try it out XD.