Alto's Adventure by Snowman for iOS isn't exactly going where no action arcade game has gone before, but gosh ain't it gorgeous? In it, you play a young boy named Alto whose herd of llamas escapes one day from their mountaintop pen, forcing Alto to pick up his snowboard and chase them down. It's a simple premise, with simple gameplay, where tapping the screen makes Alto jump over obstacles, and holding your tap causes him to try to perform a backflip in midair... just make sure you land on your feet! In addition to picking up your precious llamas, which adds to your high score, there are coins to be spent on upgrades, and various tricks you can perform, such as grinding along lines. Even if you fall and find yourself back at the beginning, the terrain is always randomised, keeping each new play fresh. But while it's definitely on the simple side and following in the footsteps of games like Canabalt and Solipskier, Alto's Adventure manages to be both soothing and breathtaking in a way few casual high-score based arcade games ever manage. 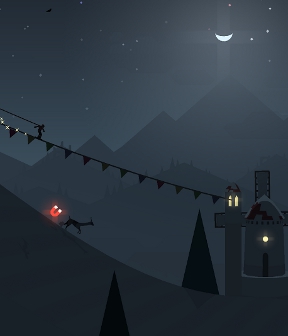 While it's true a game can't survive on looks alone, it doesn't hurt that Alto's Adventure is absolutely beautiful in a clean, deceptively understated way that never ceases to surprise you as the weather, time of day, and even your surroundings change while you play. Soft tones, light, and shadow turn the game's simple shapes into almost eerily beautiful vistas packed with surprisingly subtle details, and the randomly generated landscapes ensure there's no way for you to predict what comes next. If you crave a ton of gameplay variation, then Alto's Adventure is definitely going to feel repetitive early on, since it's slow to begin displaying different obstacles and the like. Few other games can make such simple arcade gameplay look like an art form, however, and it feels like a peek into a world that's rich with history and life. If you love simple, addictive high score games that you can pick up and play whenever you have a few spare moments, but also want something that feels indulgent and lovely in all the right ways, then Alto's Adventure is one whose scenic slopes and valleys are calling your name.