Best described as a cross between Teeworlds, Team Fortress 2, and an RPG, Altitude is a shockingly addictive online multiplayer game from indie studio Nimbly Games. Grab a plane and take to the skies as you compete (and co-operate) with other players and earn experience points bombing the enemy base and taking down foes with a variety of power-ups. As you gain levels you unlock new planes along with equippable "perks" that enhance and alter each vehicle. The instant action grabs you from the start while the nuanced gameplay and healthy serving of upgrades keep you in for the long haul. 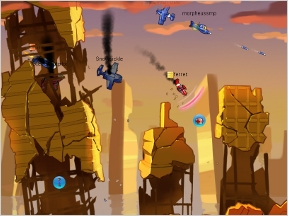 Even though it's structured around online multiplayer matches, Altitude begins with a single-player training session that helps you earn your wings while leveling-up your plane. First, learn to pilot using the [arrow] keys and fly through a series of loops. Then its on to some simple player vs. computer-controlled bot skirmishes that get progressively more difficult. Finally, it's time to try equipping perks, the crucial items you'll use to customize your plane to suit your playing style. Do you use armor strong against collisions or against enemy fire? Depends on how reckless of a driver you are!

As you ground enemy planes, damage turrets, and complete plane-specific challenges, you earn valuable XP that increases your level. When you reach certain milestones, new planes become available. A total of five planes can be chosen (ten if you include their alternate versions), each with its own weapons and attribute scores in health, speed and agility. The explodet, for example, is a strong, slow, lumbering beast with deadly missiles and the ability to set land mines. Loopy, on the other hand, is a thin-skinned speed devil equipped with tracking missiles and an EMP! Which plane you pilot is up to your personal preferences, as each is deadly in the right hands.

Analysis: Your reaction after playing the training missions in Altitude will be something along the lines of amazement. Afterwards, the excitement will cool a bit as the gameplay settles in and you start to learn the real ins and outs of controlling your plane. After you gain a few levels, unlock an additional plane, and earn a few new perks, the amazement factor returns. This time, however, it doesn't go away. Altitude is one of those rare games that keeps its charm long after that new game smell has worn off. 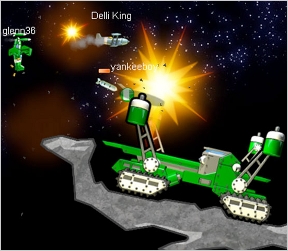 One of the factors in designing a video game is creating a rewards structure that gives players an incentive to keep playing. Why trudge through hour after hour of gameplay if there's nothing in it for you at the end, right? Altitude satisfies that role in three ways: levels, perks, and planes. For starters, gaining a level is a reward in itself. Not much of a reward, but an achievement which makes you feel good. Gain a few levels, however, and you get something even better: a new plane! Different vehicles change how you play the game, broaden the gameplay variety, and give you a real reason to keep playing.

But that's not all! Perks are earned throughout all of this, pieces of equipment that become more and more useful as you unlock learn to use them. Challenges can be completed at just about any time, earning you bonus XP that go a long way to increasing your level.

If Altitude has a drawback, it's a lack of map variety. There are just over half a dozen pack-in maps to play, with a few community maps circulating the servers as well. These are divided between free-for-all skirmishes and team-based "bomb the fort" maps. Beyond that, there isn't much else to speak of. Another gameplay mode or two, nothing too complex, just slight variations could work wonders (capture the flag? king of the hill?). A few new terrain obstacles could also be a boon, as the only thing that really exists at the moment are turrets

With no real flaws and an extremely addictive gameplay, Altitude is one of the best casual online multiplayer games I've ever seen. It's well-balanced, easy to play, and nuanced enough to be difficult to master. It's one of those games that implants itself in your head so at random moments throughout the day you think "Ooh, I should go play Altitude, see if I can gain a level or two."

Why didn't you mention that it wasn't entirely free?
Never playing this *sob* cool sounding game ever in my life, then.

Wow, this game is unbelievably addictive. I've been looking for something to play these last few days since BF:H is down. Wish I were directed to this sooner :P

The demo version is free. You will only get 2 of the 5 available planes, and just the default perks. That being said, the unlockable perks are more of the sidegrade than an upgrade per say. While its true that the default perks are not optimal in some cases, in the end it comes down to player skill in flying and dogfighting.

Feel free to try out the demo. ALOT of people are achieving max level even with the demo version which says something about the game. Now if you're really enjoying the game, why not spend $20 and unlock all the variety in planes and perks?

Liked it better when it was called Gunbound.

Of the 2 default planes (demo user here), I definitely prefer Loopy. The Bomber is too slow to dogfight, grenades are hard to aim, negating the high damage, and the suppressor is weak (though interesting). Loopy, on the other hand, has easy-to-aim missiles, the EMP is terrific for locking down your opponent before the kill and for clearing the way for a bombing run, and it handles great so you can take down opponents more easily. Loopy is also good for bombing runs in TBD because of its high speed.

On the other hand, I've been killed by bombers quite a lot, so maybe I just don't know how to use it properly.

I'm not a big fan of the bomber, either. The Explodet, on the other hand, is my plane of choice. Mines = cool.

Out of the two demo planes, i believe the bomber is far superior to the loopy. some people do prefer the loopy's higher speed and easier manuverablity, but my play style is better suited to the bombers slower, more powerful weapons. I'd probably find a better plane in the full version, but i'm broke right now. *sigh*

JIGuest: This is a completely different game entirely, sir. Try to keep up.

I downloaded it a few days ago and so far i've played 14 hours worth. It's addictive, I'll give it that. It's appeal is like that of a sport: a kind of instinctive skill game, minus the exercise. I'm definitely annoyed at the "two guys just trying to make great multiplayer games" for wanting us to pay for the other 3 planes. I'm constantly getting creamed by one buyer when playing Free For All, who consistently gets twice as many kills as me. Even with no superpowered buyers, I can jump from first to third when a newly spawned pilot happens upon a group of damaged planes in mid-battle. All I get is a lousy assist. I don't feel like I've accomplished anything when I Level Up, mainly because leveling is extremely easy. Even the worst player can get to max level, and almost as fast as the best of fliers.

Nevertheless, the game is fun, and I can always test out all the other planes when using the Level Editor. The two available planes can we wonderful: The Bomber can be excellent for doing high damage, then quickly finishing the job with rear shooting, and Loopies can drive through attacking planes and drop the Big Bomb before opponents have a chance to turn around. The bottom line being that Altitude is a freakin' addictingly fun.

I've been playing this game almost nonstop since you posted it. Loads of fun.

I plan on buying it... eventually. I've played for nearly 10 hours on the demo, though. Very very fun and addicting. Bomb mode is way better than free for all, though.

Carnax, I Completely agree. even though the bomber is slower then the loopy, the bombers firepower and health are key features to a plane in altitude.

I can't connect to the login server to create my account. I turned on admin mode, unblocked network... stuff, and, sadly, turned off my firewall. It still won't connect.

They make it sound so good and i was just about to play it when it said you had to download.*cry* looks like i'll never play.

Aah, cursed be the review that started my addiction. Played the demo a lot, then bought the whole game after realizing what pure gold it was. That was last December. I've clocked over 350 hours (strictly ball mode) ever since, and the game is still novel everytime I play thanks to really tight controls and gameplay, lots of variety in maps, planes and tactics, and tons of talented human opponents. If you like the other games on my list below, this one here might just be the one you were born to play.

Games I've played the most:

YAY I just got the full version and out of through all the planes, the biplane is the best :-)

I've been playing this game since I saw it on here. It's pretty much the only game I still play from within the last 3 months (this one so happens to extend to 3 years).

Demo players can now play forever and use all the planes. Still can't use all the perks unless you purchase the game. Well worth the ten bucks, imo, and it drops to three dollars during the steam sales.