The original series of Shift Games introduced a clever new puzzle/platforming mechanic where players had to invert the play area repeatedly to navigate through one-screen levels. Now, Alt Shift gives us an all new Shift-style game with smoother graphics, deeper puzzles, and a healthy dose of mini-games. The story is one that we've heard before. It's your basic "dimensional traveler meets opposite gendered partner, evil mad scientist kidnaps partner for unclear reasons, dimensional traveler must defeat mad scientist through clever puzzle platforming," story. Like Shakespeare wrote. But the fact that the story-line in Alt Shift is so basic just complements the fact that the platforming game is so delightfully minimalist.

If you've played a Shift title before, the controls will be familiar to you. If you haven't, worry not, since they're extremely simple. [A] and [D] or [arrow] keys to move, [W] or up [arrow] to jump, [S] or down [arrow] to invert the screen. The goal in each level is to get to the exit, which is rarely as simple as walking in a straight line, as the first level would have you believe. Instead, you'll need to use your peculiar powers to flip the screen to gain access to different areas and navigate the puzzles that bar your way.

Puzzles tend to be clever rather than torturous, and the game definitely focuses more on mental acuity than digital dexterity. There are a couple of tricky jumping puzzle levels, but players have up to three skips they can use to move past levels that are proving too difficult. In a clever twist on the mechanic, you can win a skip back by beating that level at a later time, which means that you can always choose the easier of the two levels you're stuck on to beat.

Analysis: Alt Shift has had a lot of time to develop its mechanics, and it shows. The game is really polished, which is nice to see since the earlier entries in the Shift series definitely felt rough. The platforming is smooth and the controls are easy and clear. It's obvious that the design team has a great sense of how to make the inversion puzzle the most fun it can be. The addition of blocks that you can either move around or move through is a great one, and really adds some nice variability to the levels. It's not a new mechanic to the genre, but it's very well executed, and includes a pull feature! Perhaps I've been playing too much Sokoban but I'm always delighted when my character can actually pull things as well as push them. 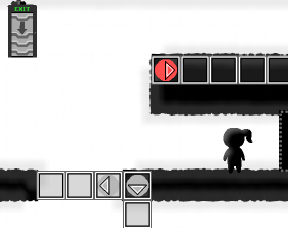 Alt Shift does have a couple of flaws. The mini-games aren't very well integrated into the game. They feel a little tacked on, and are basic sliding or spot-the-difference puzzles. The storyline, such as it is, is increasingly nonsensical, especially when the mad scientist tries to explain that he's locking you out of his lab using minigame-based locks. They're going for a bit of the Portal tone, but it doesn't really come together. Another (minor) beef is that the game gives you a "completion" rating when you beat a level, but the ratings seem random, and don't reflect on your speed or ability beating the level.

That said, Alt Shift is definitely a strong, smooth, polished puzzle game. If you haven't played any games in the series before, it's a great place to start, and if you're familiar with the series, it's a neat addition to the cannon. With 80 new levels to test your reality-warping skills and the ability to play as either an indistinct black blobby girl rather than an indistinct black blobby boy this time 'round, it offers a lot of play time for puzzle fiends, platforming warriors, and shadow-hopping heroes of all ages.

There's a light version in Flash.

Is there any way to get the full game to run in windowed mode?

I'm playing the light version online and I'm stuck on level 15. Does anyone have any insights?

Nice little game--makes me wish I had a 5-spot to spare for the full one. Ah well.

I don't know about the full game, but the Lite version is definitely easier than the previous Shift games. Shame the author didn't bother to put an example of one of those 'minigames' in there as well.

I don't really like how the walls and characters are organic (rough or smooth) but the keys, flippers and blocks look like they were cut and pasted into the game. It's not laziness, since they clearly made these themselves, but the disparity is something you see in low-grade first flash attempts. Hardly what you'd expect in a for-pay product.

That's not enough to make me say I won't buy it, of course, but it's bugging me.

I think they've been reading the JIG comments section...

Just a quick note to the developers... is Demo 8 supposed to be achievable with just two jumps? ;-)

SOO COOL! I used skip on the 16th level only, and then it said the game was over! =(

I love the game, but I can't even last 30 seconds against the first boss, and I need to last two minutes (I believe), so I'm kinda at a standstill. Too bad you can't skip boss levels.

This was fun, but struck me as MUCH easier than original Shift.

"In a clever twist on the mechanic, you can win a skip back by beating that level at a later time..."

If by 'clever twist' you mean 'feature seen in many phuzzles before', you hit it on the nail :D

ray9na could you please put up a link to where you found a walkthrough? I've been looking for a good while and I've struck out. Thanx in advance.

I know this is going to sound sad...but on some games like this I'm very much a perfectionist. I have everything beaten...but my problem is that the game doesn't give me the medals for the pipe games...so I don't get to see what the final prize is :(

I know this is going to sound sad...but on short games like this I like to beat everything and get all the achievements...without using any skips. Unfortunately I'm not getting credit for the pipe games...so I can't see what the final prize is :(

Rage! I just spent 5 minutes playing this game, half of which I spent fighting the very controls I learned in the earlier Shift games. Up shouldn't be the only jump key, and nobody mention WASD... In ever other Shift game, Space is for jumping. Add on that the graphical change from good to crap, and the loss of the humor gives this Shift outing a final rating 0/10.