If you enjoy word puzzles and appreciate a good, clean design, then BorderLeap's Alpha Omega for iOS is coquettishly fluttering its eyelashes in your direction. It's a simple but oh so stylish spin on a crossword puzzle, where the goal is to swap tiles horizontally and vertically to unscramble the words in each level. Often the first and last letters of each word are already locked in place, but you'll need to suss out where the rest of them go, and remember that letters at crosspoints can be swapped horizontally or vertically. Rather than having clues for individual words, all of them are themed around a certain concept, like "the farm" or "cooking", with a few gameplay twists tossed in to spice things up. The first is that each letter can only be swapped once per level, and the second is that eventually even the level's theme will be obscured, filling in while you play, while later the game will even begin introducing spaces within certain words. If you're stuck, the game comes with a few hints, which will randomly swap two letters to their correct position, but unfortunately after you've spent the ones you're given, the only way to get more are through optional in-app purchases. 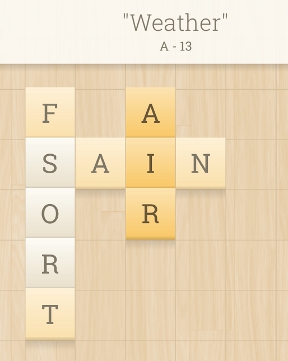 The biggest problem with Alpha Omega is that eventually it starts feeling repetitive... obviously there's only so much you can do with a word scramble, but the game also has a tendency to reuse words a lot, which can only add to the feeling of sameness after the first few dozen levels. The other issue is that the themes can sometimes feel barely connected to the words on the board in a way that makes the theme function poorly as a clue... Spring as a theme for rebirth I get, for example, but tadpole? Eeeeeeeh. Despite this, Alpha and Omega's beautiful, mellow presentation and piles and piles of puzzles make it an easy recommendation for any word nerd. It's the sort of game that calls for a comfy chair and your favourite beverage, lazy afternoons and evenings of relaxing gameplay that keeps your brain engaged without ever beating it up. It's for players looking for zen-like atmosphere and not a whole not of pomp and flash, and with a staggering 360 levels, you're going to be puzzling for a long, long time for its paltry price. If you love word games and want something simple and smart, then Alpha Omega's sleek presentation and oodles of scrambles will be right up your alley.